WMU students help show go on, virtually, at the Playhouse at White Lake 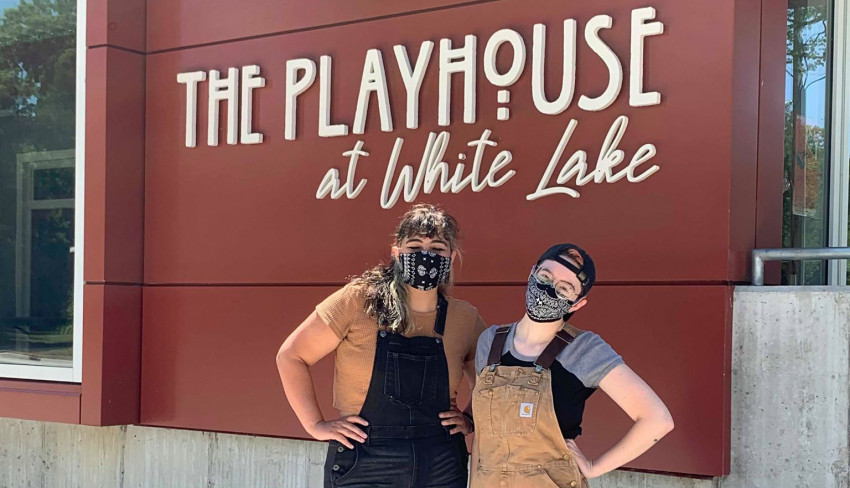 Caroline Arana and Claire Beaman stand together in front of the Playhouse at White Lake sign in Whitehall, Michigan.

WHITEHALL, Mich.—If 2020 were a stage production, COVID-19 would be the villain waiting in the wings. Set on upstaging just about every aspect of life as we know it, the illness brought industries around the world to a screeching halt earlier this year. But, as they say,"The show must go on." And it will at the Playhouse at White Lake, thanks in part to two Western Michigan University theatre students.

"I'm the technical director, scenic designer, sometimes lighting designer, and I do a lot of everything," says Claire Beaman, who has spent time at the Playhouse for the past several years, working her way up from an intern.

Classmate Caroline Arana, in her second summer working at the theatre, has also taken on a number of responsibilities. "I am the production manager here. I also am doing some costumes. I'm working as a carpenter as well, helping (Beaman) focus lights whenever we need to." 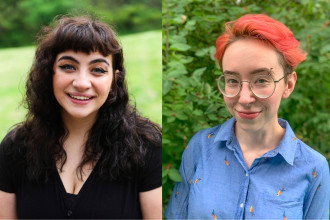 In the face of mounting adversity, Arana and Beaman have helped the small community theatre in Whitehall, Michigan, pull off something many large theatre companies haven't even dared to do: Reimagine a full summer of programming, virtually.

"We were really trying to focus on how we can still do what we want to do while keeping people safe," says Beaman. "We have this really perfect little niche of a community around this theatre where a lot of families are really involved."

Ultimately, the Playhouse decided to replace its planned summer lineup with a slate of virtual performances available via livestream—a huge undertaking for a company that has never tried anything like it.

"I know a big point for me when we were talking about it was some of the only institutions that are doing anything like this are very large, national arts organizations," says Arana. "(What we're producing) needs to be of a high grade if we're expecting people to pay for tickets to watch something online. So, we want a good, active product for those people."

"It was a scary transition, but we have a really good team of people that have all been working to make it work," Beaman adds.

The Playhouse was able to mitigate risk of virus transmission during production by assembling small casts with people who live in the same households. Physical distancing between cast and crew members was also relatively easy because of the size of the theatre, and workers like Arana and Beaman also took on extra tasks so keep the size of the crew to a minimum.

"This was a vast group effort," says Arana, noting that most cast and crew members are volunteering their time in order to keep the small theatre afloat and keep the arts alive in their community this summer.

Both Arana and Beaman credit their training at WMU for their ability to quickly shift to unknown territory and take on work they hadn't done before.

"The theatre program at Western does a really good job of getting us really well-rounded," says Beaman. "We take lighting design and we take costume design, and I'm looking back at my notes and trying to figure out what I know." 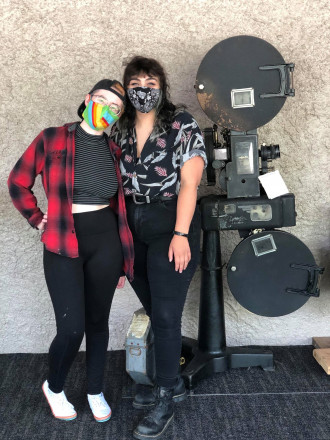 "Yeah, lighting never really made sense to me, but one of our classes I took with our new lighting professor, Jen Rock, has just absolutely changed that," adds Arana. "I'm able to work the board a bit, much more than I was ever able to. It's really amazing the level of preparedness we actually have. Sometimes you don't realize it until you put it into action."

The well-rounded curriculum, paired with the fast-paced nature of a typical season at WMU, gave Beaman and Arana a solid base to help build the Playhouse's modified summer schedule, which the theatre has dubbed, "From Our House to Yours."

Supported by a grant from the Michigan Council for Arts and Cultural, the summer lineup will include four pre-recorded, livestreamed productions as well as two live outdoor performances on the North Terrace of the Playhouse. The season runs for six consecutive weekends beginning Thursday, July 16. Tickets range from $10 to $40 and can be purchased on the Playhouse's website.

A true labor of love, Beaman and Arana have amassed experience they hope will not only ensure the Playhouse successfully traverses these turbulent times, but also gives them new skills to set them apart as they pursue their future careers.

"Ultimately, we made a very small season under a very minimal budget at a small theatre accessible to anyone, anywhere in the nation," says Arana, who hopes this also ushers in an era of increased theatre accessibility.

"I think this is where the future of theatre is going," says Beaman. "The arts will survive, under any circumstances, which is a really great thing. We're resilient."