KALAMAZOO, Mich.—Protests. Lawsuits. Plots to kidnap or assassinate governors. Shelter-in-place orders—SIPOs—enacted by state leaders across the country to mitigate the spread of COVID-19 have drawn both applause and criticism. Schools, restaurants, daycares and gyms closed and many businesses sent employees home to work or laid off staff and completely shut down. The actions have ignited a tug-of-war between public health and economic prosperity, between government powers and civil liberties. And while the health and prosperity of citizens was at the heart of each state leader’s emergency management plan to keep the coronavirus at bay, a new study by an interdisciplinary team at Western Michigan University finds politics played a major part in how and when SIPOs were implemented.

Funded by a Meader Presidential Endowment COVID-19 Response Grant, Drs. Matthew Mingus, professor of public management, and Kevin Corder, professor of political science, along with graduate student Daria Blinova poured through data to analyze political decision-making by governors in all 50 states in order to determine what factors led to issuing SIPOs. 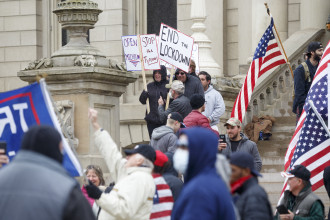 The World Health Organization initially sounded the alarm on “cases of pneumonia of unknown etiology” emerging in Wuhan, China on Jan. 5, 2020. By March, what we now know as COVID-19 began to surface in the United States. While little was known initially about the illness, certain factors were associated with increased risk of serious symptoms and fatality. The WMU team examined such indicators as rates of chronic diseases, degree of urbanization, hospital beds per capita and proximity of major international airports, among others, as factors that state leaders would take into account when assessing risk management.

Mingus hypothesized that states at more risk would act more quickly to enact movement restrictions and SIPOs. Corder, on the other hand, suspected political control would drive action.

“Politics has always been a factor in public health crises. There was resistance to compulsory vaccinations for Smallpox 100 years ago, and the Supreme Court stepped in to clarify that the public health gains of vaccination outweighed the civil liberty of refusing a vaccine,” says Corder. “So, the question of balancing government powers to vaccinate, quarantine and track against privacy; individual control over medical care; and personal freedom is not new.”

Analyzing the length of time between when each state’s COVID-19 incidence reached one case per 100,000 people and when (or if) a SIPO was enacted, a pattern began to emerge. States with both a Democratic governor and legislature enacted SIPOs a week earlier than states with both a Republican governor and legislature. Eight states never issued a SIPO by the time other states began to ease restrictions in May 2020, and all of those states had Republican governors and legislatures.

“It was truly which political parties had control of the state directly that mattered,” Mingus says.

Those decisions had repercussions, Corder adds, pointing to a Columbia University study indicating that 55% of reported deaths as of May 3, 2020, could have been avoided if control measures had been implemented just a week earlier. “Weeks of delay translates into thousands of lives.”

Data from the Centers for Disease Control and Prevention indicate that by mid-October, median caseloads in the eight states that did not enact a SIPO were 2,900 per 100,000—nearly 40% higher than the 2,100 people out of 100,000 in the other 42 states.

“To me, that’s scary,” Mingus says. “The difference that was created here based on politics measurably impacted where we were at and probably even where we are now.”

From a public management perspective, for the researchers, it brings into question how different the outcome might have been had the public health code been used differently and a national movement control order been enacted similar to what’s been done in other countries.

"It's easy to say, 'We have 4% of the world's population and we have 20% of the world's COVID-19 cases. We screwed this up. We have not managed this crisis,'" Mingus says. "At that point, I think you can place some of the blame on the way the politics work out, how polarized politics have been in the United States recently."

Mingus plunged deeper into his team’s findings, which have been published in the journal Policy Design and Practice, in a presentation on Thursday, Oct. 15. The webinar, which remains available for viewing, was the first in a monthly webinar series diving deeper into COVID-19 research at WMU launched by the College of Arts and Sciences.