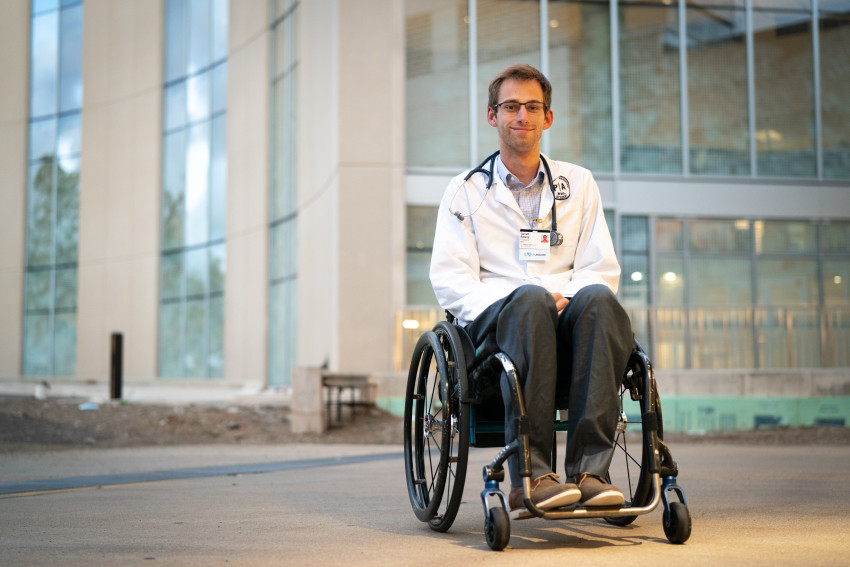 Smart is putting passion over a paycheck to pursue a higher goal. Seeing challenges as opportunities rather than roadblocks.

An outdoor sport enthusiast and adrenaline seeker, Garrett Bazany is no stranger to creating his own path—whether down a snow-covered mountain or over perilous rapids. He's traversed obstacles on his career path as well. 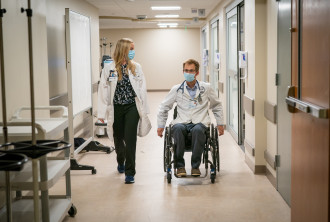 Initially intent on a career in engineering like his father, he realized after several undergraduate classes it wasn’t the right fit. The medical field interested him, but after trying out pre-medicine, he decided being a physician assistant better fit his calling and would give him more opportunity for patient interaction.

“I want to be able to, as a provider, spend more time with my patients and learn more about them and what may be causing their problems,” says Bazany, who grew up in Grand Haven, Michigan, and is now in his second year in WMU’s highly competitive physician assistant program, where he’s been able to put his passion to work, getting valuable hands-on experience in various labs and getting a feel for the job in a series of clinical rotations. “WMU has set me up for success.”

Bazany’s drive to foster a patient connection is personal. He has spent the last decade in and out of hospitals following an accident that nearly cost him his life.

“It was almost a blessing and a curse,” he says. “It’s given me a purpose. I can use what I’ve experienced to make a difference in other people’s lives.” 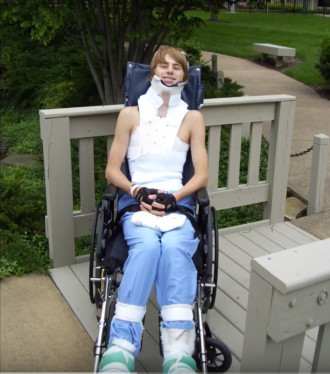 Bazany after his trampoline accident in 2010.

An active teenager, Bazany was practicing flips on a trampoline in May 2010, the end of his freshman year in high school, when he came up short and landed on his head. He couldn’t move his legs. In a haze, he managed to pull himself to the edge, stabilize his neck between the springs of the trampoline and call 9-1-1.

“I remember thinking, ‘My life’s over now. Everything I like to do is done. What am I going to do?’”

Amid the fear and doubt, though, rays of hope appeared. In fact, Bazany had already beaten many odds. Doctors told him the location of his spinal fracture should have paralyzed him from the neck down, meaning he would have been unable to use his arms to pull himself to safety or operate his phone. Swelling likely would have cut off his ability to breathe as well.

“After hearing that, it kind of flipped my perspective,” he says. “I thought, ‘Okay, I can work with this.’”

Bazany spent six weeks in a rehabilitation facility doing full-time therapy and, miraculously, was able to join his classmates when the school year started back up in the fall. Unable to compete on the cross country team, he made physical therapy his new after-school sport. Six months after his injury, when he was cleared for more rigorous physical activity, he tried water skiing. Six months later, he tried snow skiing. He became stronger and learned how to adapt outdoor sports and other activities he loved to work with his physical limitations. Soon, his wheelchair became a vehicle for new adventures.

“It was a lot of work doing it, but I was going to figure out ways to make it happen.”

During that time, he also began acting as a mentor for other young people in similar situations. His doctors would ask if he could talk to them and share his recovery story. 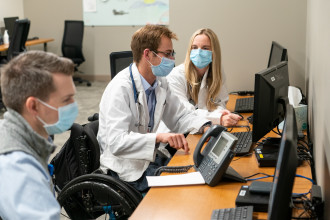 Bazany works with his clinical supervisor at Spectrum Health Lakeland.

“That's kind of where I saw that I have a powerful role in the future in medicine,” he says, “because it can help possibly make a difference in some of the patients and their outcomes.”

Bazany’s also a fierce advocate for normalizing disabilities and changing perspectives. Having worked at the National Ability Center as an adaptive recreation instructor, he’s taught individuals with physical challenges new ways to go rock climbing, mountain biking, water skiing and a number of other activities.

“I want to be on the front line advocating what’s possible in the wheelchair, break societal norms, prove that you can do anything and be on the front line of patient care to give people with a life-changing injury or diagnosis a spark of hope,” Bazany says. “(I want) to show them that the world isn’t over and guide them in recognizing the potential of their future.”