"People try to go cold turkey all the time. The problem is that there are withdrawal symptoms," says Dr. Ricky Stull, assistant professor of chemistry at Western Michigan University, whose breakthrough research lays the groundwork for a potential solution. His work advances a strategy of using enzymes to degrade nicotine in the body, flushing it from the system without any adverse effects. 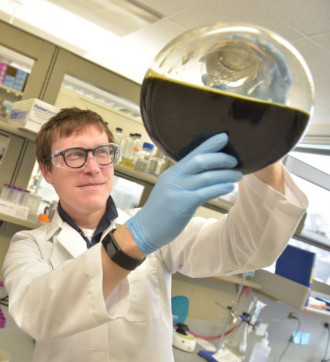 Stull's research, published in the journal Nature Chemical Biology, corrects a fatal flaw in an animal study that generated global buzz in 2018. The original study found rats addicted to nicotine—when injected with a lab-engineered form of the enzyme NicA2, which occurs naturally in bacteria found in tobacco fields—kicked their addiction.

"They didn't have any evidence of relapse, any evidence of withdrawal—all great things," Stull says. "But there was a problem with the NicA2 enzyme in that study. The enzyme, as they were using it, degraded nicotine so slowly they had to use outrageous amounts in order to see all these beneficial effects; you could never translate it to people."

The NicA2 enzyme requires an electron acceptor in order to degrade nicotine. Stull, with the help of undergraduate lab assistant Chris Clark and collaborators at the University of Michigan, uncovered researchers had incorrectly assumed molecular oxygen was the electron acceptor for the enzyme.

"My research was showing oxygen wasn't the acceptor for the enzyme. Instead we found a cytochrome protein, which is part of the electron transport chain and is normally used to produce energy within the cells, is the natural electron acceptor," says Clark, who is pursuing bachelor's degrees in chemical engineering and biochemistry. "I found if you use the cytochrome c as the electron acceptor, you need far less NicA2 to get the beneficial loss of nicotine addiction."

The result could be monumental for the millions of tobacco users who know the habit is bad for their health but are struggling to quit. 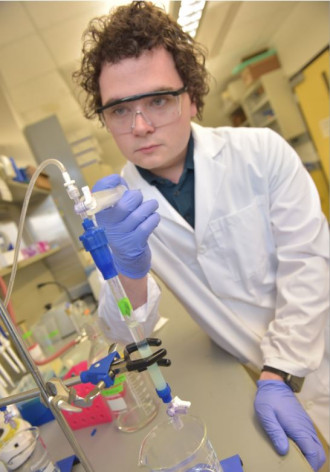 "I think the application where this would most be useful would be in an individual who is attempting to quit smoking and is at high risk of relapse," Stull says, giving an example of someone trying to quit smoking who slips during a social event with friends. Generally, introducing nicotine back into their body would trigger the addiction in their brain. "If they're being treated with this enzyme during a re-exposure event, the nicotine would not actually reach their brain, which would prevent them from becoming addicted once again."

There's plenty more to learn about why the enzyme is able to reduce concentration of nicotine in the blood without triggering withdrawal. The next step in the process will be for scientists to put Stull and Clark's research into practice through testing to determine its viability, but the breakthrough could also have wider implications.

"This is one of the first—if not the first—cases that we've proven oxygen is not the native electron acceptor for an enzyme in this family," Clark says.

Discoveries like this are what got him excited about the field. Admittedly bored and disinterested in classes in high school and thus doing poorly academically, Clark didn't get accepted to Western on his first try because of a low GPA. After taking some classes at a community college and buckling down on his studies, he was admitted on his second try with plans to be a chemical engineer. His interest evolved as he was exposed to more classes involving living systems.

"I found the complexity and not being confined to rules that are often common in life sciences very appealing because it's very complicated and always evolving," says Clark, who grew up in Holland, Michigan. "Living things are exciting because sometimes the rules we think we know are completely wrong."

By broadening his horizons and diversifying his scientific research at WMU, Clark is also contributing to the development of potentially life-saving therapeutics.

"Tobacco use is the leading cause of preventable illness in the world," Stull says. "If we could come up with a new treatment that can help people get over their nicotine addiction or tobacco use, we could make a pretty big impact on human health."