KALAMAZOO, Mich.—Western Michigan University's vision for the future of campus life is becoming a reality. The first group of students moved into the newly constructed Arcadia Flats apartments—a project that leads revitalization efforts in Hilltop Village, on the south end of campus.

"The idea with Hilltop Village is to re-energize that part of campus and to really make it a hub," says Dr. Diane Anderson, vice president for student affairs. "We're really excited. Arcadia Flats turned out beautifully."

"Western's vision was captivating when it first released what the apartments would look like," says Kiara Hickey, a junior from Pontiac majoring in family studies. She says her expectations were surpassed when she was finally able to see her new apartment in person.

"I think Arcadia Flats helps move WMU into the future because it is offering a completely new style of housing that we have not seen before at Western," says Rachel Nave, apartment complex coordinator. "It combines the convenience of living on campus with a contemporary housing design. The innovative apartment-style units and common spaces reflect the needs of students today and into the future." 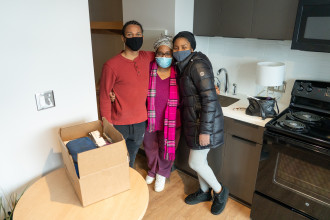 April LaGrone, right, gets some help unpacking things in her new kitchen.

Each of the six-story building's 197 units has its own kitchen and private bedrooms. The building is equipped with air conditioning and a laundry facility as well as study lounges and a workout room.

"It's really unique," Anderson adds. "We design our housing with the maturation process in mind. In your first year (on campus), you want to meet students from a variety of backgrounds and begin developing your friendship base. We provide you with staff and resources to help you acclimate to college life. After you've developed your group of friends, we want you to have an opportunity to live with a little more independence to help you along your journey."

Nave says the building garnered rave reviews from students and parents alike during move in.

"My first impression during move in was a mixture of excitement and anticipation," says April LaGrone, a sophomore public health student from Flint, who is most excited about having her own kitchen to fuel her passion for cooking and baking. "I love the space I have now to really make my place my own. Creating the right environment is especially important to me while attending my online classes."

"I am most looking forward to privacy. It's easier for me to focus on classes and do homework," adds James Jungblut, a senior from Stevensville studying entrepreneurship. "I have lived in Western Heights, Henry Hall and this past semester in Davis Hall. Arcadia is so far my favorite." 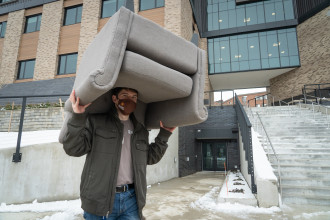 James Jungblut carries a chair up to his new apartment.

While living spaces are separated, Arcadia Flats was designed with community in mind, adding a number of common spaces to encourage and foster connection among residents. In order to mitigate the spread of COVID-19, however, some furniture has been removed in shared spaces and large gatherings are discouraged this semester.

"We want to make sure there are opportunities to connect; that's important," says Anderson, emphasizing the benefits of living on campus extend far beyond the convenience and proximity to classes. "Research as well as Western Michigan University data show that by living on campus, students do better academically and graduate at a higher rate. I think, in part, it's because we have more resources for them on campus. We have staff there to support them, and they're building a community of hopefully lifelong friends that they'll be able to matriculate with throughout their tenure here."

Hickey says living on campus throughout her time at WMU has allowed her to experience college to the fullest.

"I could not tell you how many times I've met up with friends or run into other Broncos and had pleasant conversations in my free time," she says. "On top of that, I have always been more likely to go to on-campus student events if they are within walking distance."

Apartments at Arcadia Flats are available through a lottery process, with prices ranging from $1,200 per month for a furnished loft to $585 per month for students living in two-bedroom, four-person flats. Laundry and utilities are included.

"We wanted to have price points that would work no matter who you are; it's really important to us," Anderson says. "We want to make sure that our housing is attractive, available and accessible to all of our students."

Along with giving the south end of campus a face-lift, Arcadia Flats also gives students a way to start the semester off fresh.

"My goal for this semester is to just keep pressing forward," LaGrone says. "Going completely virtual was definitely not easy, but having a new and fresh space definitely helps provide some peace of mind during this time."

The Hilltop Village development will also include a new student center, which is currently under construction and expected to open in fall 2022.