LOS ANGELES—Spider-Man. Iron Man. The Hulk. Scott Jacobs. The Western Michigan University alumnus may not be a superhero himself, but his super editing skills have landed him a spot in the Marvel Cinematic Universe (MCU).

"I've wanted to work on those big projects for forever," says Jacobs, a second assistant editor on the hit Disney+ series "WandaVision," an "Avengers'' spinoff based on Marvel Comics characters Wanda Maximoff and Vision. "When I was finally able to sign my paperwork, it was the greatest day ever because it was this dream in the back of my head of being able to work on a Marvel property."

It's a dream he hadn't even begun to imagine two decades ago when he was applying to college. An avid gamer as a kid, he initially thought about pursuing a career in the video game industry. Then, late in high school, he got the acting bug. 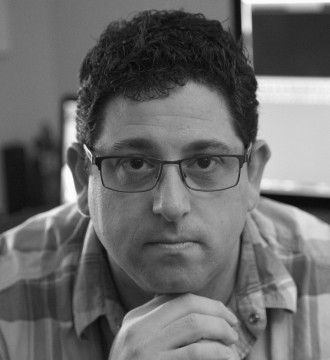 "I chose Western because it had an amazing theatre program and also had a top business school," says Jacobs, who grew up in suburban Chicago. "I figured if I failed at getting into theatre, then I could just change majors. Thankfully the theatre thing worked out."

But theatre is competitive, and as he moved through Western's program, his focus began to shift.

"The theatre program was an amazing experience, I just wasn't confident I'd be able to 'make it' as an actor. I still loved entertaining and that idea of transporting people for two hours away from their life and problems so they could just enjoy themselves."

He found his spark in an introduction to film course.

"It was the first time that I read a textbook cover to cover, and I was just amazed with it," Jacobs says. He also became drawn to movies with different visual effects and sophisticated editing. "I went back to the textbook and started reading more about what editing was, and I saw that it combined my previous love of playing video games and technology … with my love for theatre and acting."

Jacobs graduated in December 2003 with a degree in theatre performance and moved to Los Angeles, hoping to break into the film industry. Initially rejected by the American Film Institute (AFI), he spent a year building up his portfolio—lining up internships, editing short films and working at the Sundance Film Festival. The next time he applied to AFI's master's in editing program, he got in.

He says it was "definitely grit" that secured his spot in the program. "I came out here with no connections. The only thing I had coming out here to kind of protect me was school. It gave me the opportunity to meet people.”

A cascade of connections cultivated by hard work and cold-calls landed him his first job as a post production assistant on Academy Award-winning director Ed Zwick's film "Defiance." His network continued to grow from there.

"I can trace all of my success back from the connections I made from being a post-production assistant," Jacobs says, also touting the strong Western connection in L.A.

"Western's theatre program has a lot of people go on to do great, great things. I still keep in touch with a fair amount of them who came out here to pursue their dreams," he says. One of his favorite memories involves his time working as an editor on the CBS show "Person of Interest." As he went through footage for a scene he was editing, he noticed a familiar face. Lead actor "Jim Caviezel is walking through the police precinct, and as the camera turns coming through the door, I see Mickey Solis, who was a Western alum. Now all of a sudden I'm cutting a scene with a friend who I went to school with."

Solis acted in the first film Jacobs ever made, during a directing class at Western.

"Fast forward to a little over 10 years later, and now I'm cutting a real scene with him. It was a surreal moment. It was just really cool."

While he never worked directly with her, Jacobs was also excited to see Western theatre alumna Victoria Blade acting in "WandaVision."

An exciting prospect for a kid from Chicago, Jacobs was working on "Space Jam: A New Legacy"—a reboot of the 1996 Michael Jordan movie, this time featuring LeBron James—when an editor he knew let him know about an opportunity to work on the "WandaVision" crew.

"I'll never forget the first day of just walking onto the Disney lot and walking into the cutting room, sitting down, seeing scripts on my desk and seeing all the footage for the first time," Jacobs says. "When I stop and take a breath and realize how far I've come—and the fact that I am working on a Marvel property—it's definitely a moment to just soak in. Knowing that I'm working on something that my kids can see and are excited to watch and my wife is proud of, that's what it's all about."

Already an exciting accomplishment, it was also an extremely lucky development considering he signed on in March, just before the tidal wave of COVID-19 hit the United States.

"Thankfully, either 'Space Jam' or 'WandaVision' has been working nonstop through this pandemic," says Jacobs, who is on the board of directors for the Motion Picture Editor's Guild. "At one point, I read that some 95% of the International Alliance of Television and Stage Employees was completely unemployed, so the fact that I was still working was a godsend."

Like many sectors upended by the pandemic, the film industry had to reimagine production in order to survive.

"There's been a dynamic shift as far as how things are done," Jacobs says. Things like strictly enforced work pods, enhanced testing and quarantining and remote work environments have become the norm. "They're making a lot of strides to be able to keep production moving forward. There have definitely been hiccups, but the sheer fact that we've been capable of putting out content by working from home has been incredible."

Initially slated to work on “WandaVision” from March to August 2020, Jacobs will now likely work on the project through April. In addition to helping the lead editor, Jacobs was also able to edit footage for a few scenes himself.

"It's just awesome. It's definitely been the highlight of my career," he says, hoping this is his foot in the door to many more Marvel projects. "It's extremely exciting to finally be here. It's like walking into Willy Wonka's chocolate factory—you don't want to leave!"