Love on the ice: A Lawson romance comes full circle

CINCINNATI, Ohio—Western Michigan University's Lawson Ice Arena will always hold a special place in Doug Wheelright's heart. He spent three years as a student employee at the rink, feeding his passion for hockey while pursuing a degree in food and consumer package goods marketing.

"Every young hockey player has two dreams in life. One of them is to play in the NHL, and the other is to drive the Zamboni, so I was batting .500," jokes Wheelright, who graduated in 2014. 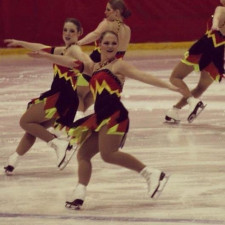 While hockey may have been his first love, Lawson is also where Wheelright met the love of his life—an early childhood development major on the synchronized skating team named Emily. He'd seen her around the rink when her team was practicing.

"I honestly just thought Doug was super cute when I saw him at the rink! I remember telling some of my teammates that I really wanted to talk to him," says Emily Wheelright.

"I think the first time we talked to each other was when they were skating during intermission at one of the hockey games that I was working," remembers Doug. "I finally got the courage to ask her for her phone number."

Once he broke the ice, the pair hit it off. They'd often hang out at Lawson, playing table tennis or going on after-hours skates.

"I loved that I found someone that loved being on the ice as much as I did back then," Emily remembers.

The romance began shortly before she graduated in 2013, and by 2015 they were engaged. Through it all, skating has remained a constant in their relationship.

"We've made it a point to go on a date every year and hold hands and skate around the ice," Doug says. They even found a way to work in their favorite pastime when they tied the knot in 2016, intertwining laces from their skates at the altar. 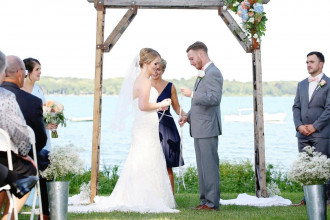 Doug and Emily literally tied the knot at their wedding, intertwining the laces of their skates.

This January, the Wheelrights began a new chapter of their lives when they welcomed their first child, a baby boy named Lawson—a tribute to where their love story began.

"Our friends actually joked in college when we first started dating, 'Oh, if you guys have kids, you should name one of them Lawson.' So, it kind of went from a running joke early on in our relationship to being one of the first names we considered when we got pregnant," says Doug. "I definitely bought a 'W' onesie once we got home (from the hospital). He's got to have some Western gear always if that's going to be his name!"

Now living in Cincinnati, Ohio, where Doug works for Post Consumer Brands, the couple is already looking forward to trips back to Western with Lawson. Doug envisions him riding the Zamboni, just like dad.

"I'm sure he'll have a pair of skates on his feet right about the time he can walk, just as Emily and I did," says Doug, noting that Lawson's great grandfather and both grandfathers were also hockey players, so "it's in his blood, for sure."

They'll have plenty of stories to share with their budding Bronco, and they're looking forward to him carrying on the Western tradition.

"Western set me up for success in a lot of ways," says Emily, who worked the past four years as a family support specialist/home visitor for Every Child Succeeds—an organization focused on helping new moms and families create nurturing and healthy home environments. "Being a student-athlete takes a lot of hard work and dedication, which have been great lessons I've taken with me throughout life. I am forever grateful for WMU—it brought me some of my best friends, tons of life lessons and my husband!"