KALAMAZOO, Mich.—Loneliness from isolation, stress and anxiety over health threats and depression over lost loved ones: They are a tell-tale sign of the times. The Centers for Disease Control and Prevention says the pandemic has pushed youth mental health concerns to crisis levels, yet a Western Michigan University study finds significant racial disparities in access to care.

Led by clinical psychology doctoral student Kalani Gates, an audit of mental health providers in southwest Michigan found Black and Arab American mothers who sought services from mental health therapists for their adolescent children were more than 70% less likely to get a call back from a provider than their white peers.

"The findings are very shocking, but I don't think they are very surprising," says Gates. "This is a problem that's been ongoing."

For his thesis, Gates and his research team hired voice actors to play the parts of mothers looking to set up therapy appointments for their teenage daughters. They randomly selected 180 mental health providers in southwest Michigan and 180 in metro Detroit, and the actors called after hours and left messages seeking mental health services.

"We tracked who called back and the content of their messages. Overall, what we found is providers in southwest Michigan were significantly more likely to call the white mothers back than the Black or Arab mothers. And in metro Detroit, we didn't really find that—all of the mothers got the same callbacks." 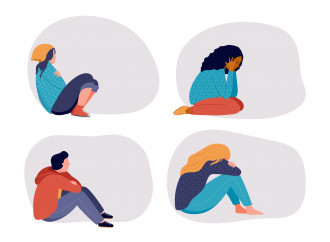 While there is further research to be done about the reason for the disparities, Gates says the study points to implicit biases.

"When you get these calls, you make these unconscious decisions either to not call back or not initiate services," says Gates. "Even in the field of mental health, where a lot of therapists are well educated—they have master's and doctoral degrees—implicit bias isn't really something we're immune to."

While likely unintentional, that implicit bias can have particularly damaging effects among youth of color.

"For a lot of people, there is a mental health stigma, and it takes a lot more effort for them to make that call. Then to not be called back is very damaging, especially if it was the first time they were trying to reach out for help," Gates says. "A lot of times, the finger is pointed at the help-seekers or the characteristics of the people as the reason why they're experiencing (disparities in mental health treatment), and we need to think more broadly. There are systemic reasons also as to why these things occur."

"A lot of the therapists in our study have been practicing for six to 10 years or more," Gates says. "Maybe there needs to be more oversight. Maybe there needs to be more training, maybe even at the graduate level at universities. We need to train people to think more about implicit bias and then really be careful to identify if we have them and make sure we're not acting on that."

Gates, who grew up in Hawaii, is passionate about pursuing a career that increases equity and access to health care.

"I'm hoping that I can create some electronic interventions or get creative to figure out how to get racial and ethnic minorities access to mental health care," he says. In working with his advisor, associate professor Dr. Amy Damashek, Gates sees a path to that future.

"I didn't grow up super wealthy, and I think access to health services and things like that was more of a luxury," Gates says. "So now that I'm kind of coming into a position of power (as a professional in the field), I feel like I should use my position to help other people. I think research is the foundation of a lot of these changes."