Far out! Researchers at Western testing technology to propel NASA deeper into space 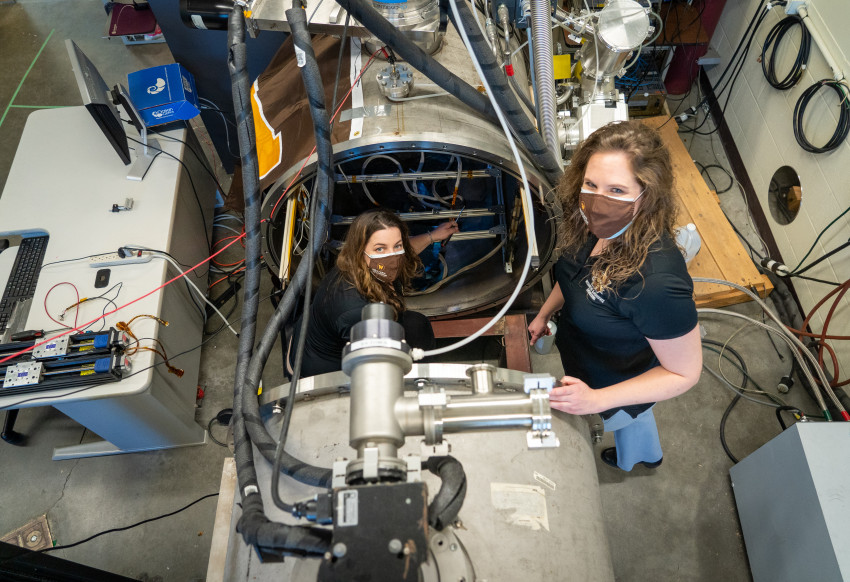 Margaret Mooney, left, and Dr. Kristina Lemmer stand with a vacuum chamber in Lemmer's lab. The device is used to simulate the conditions in space.

KALAMAZOO, Mich.—NASA's new Mars rover is grabbing headlines around the world, but perseverance in a lab at Western Michigan University could be the key to unlocking even deeper space exploration.

While shuttles blasting off from Cape Canaveral accelerate toward the sky with explosive chemical reactions, electric propulsion is a more efficient way to move rockets, satellites and other objects once they're outside Earth's atmosphere.

"It's really good for long-duration missions so you can get a much larger amount of mass to where you want it to go," Lemmer says, pointing to NASA's Dawn mission as a project that would have been a bust without electric propulsion. "It left Earth, went to an asteroid, entered orbit around the asteroid, lowered its orbit, went to another one and did the same thing. The amount of chemical propellant that would have been required for the mission was impossible if they wanted to bring any sort of science instruments with it." 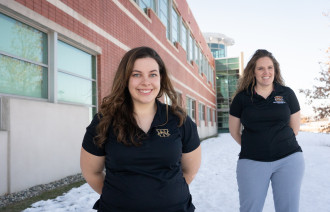 Electric propulsion will also be a big factor in getting NASA back to the moon. In fact, the technology graduate student Margaret Mooney is working on in Lemmer's lab will be used in thrusters at the Gateway lunar outpost—a jumping-off point for astronauts looking to take another giant leap for mankind.

"It's the heart of that mission, because it's going to be orbiting the moon and then we can rendezvous with it. And that's how we'll be able to get from the spacecraft to the moon," says Mooney, who is pursuing a doctorate in mechanical engineering. As a NASA space technology graduate research opportunity fellow, she's studying the physics of hollow cathodes, which will assist in the operation of propulsion devices on the Gateway. The devices help ignite and power Hall and ion thrusters, which propel objects through space.

"Hollow cathodes are like the heart of these propulsion systems, and they're actually the biggest failure mechanisms. So figuring out what drives those failure mechanisms is really important," says Mooney. The Gateway is also a step toward in the next phase of space exploration: missions to Mars and further into the galaxy. "You don't want your hollow cathode to fail while you're at Jupiter and trying to get to Pluto."

Back on the ground at Western, Lemmer and Mooney are excited at the possibilities their work could create.

"The coolest thing about my research is knowing that it is actually being put into practice at NASA. I always am amazed I get to do this every day," Mooney says. Her enthusiasm takes Lemmer back to the spark that helped launch her own career.

"When I was about 13, my dad took me to Kennedy Space Center, and I was like, 'That's it, this is what I want to do,'" says Lemmer, who is also doing electric propulsion research for the Air Force as well as mentoring the Western Aerospace Launch Initiative, or WALI, which teaches students how to design and build a cube satellite—a type of miniature satellite for space research. "The dream was always there to be an astronaut, but in reality, aerospace engineering was my ticket. And I just fell in love with this kind of stuff."

With a name like Mooney, you'd guess contributing to a lunar mission may always have been in the stars.

"I grew up always admiring space, but I really wanted to be a teacher. I come from a family of teachers," says Mooney, who grew up in Shelby Township, Michigan. She says she didn't consider engineering as a potential career until she tried a program in high school that introduced her to computer-aided design and drafting work and robotics. 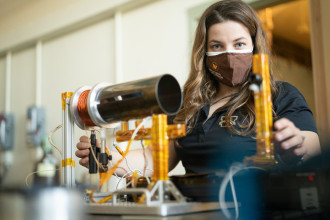 Mooney works with a solenoid she developed to simulate a magnetic field for a hollow cathode.

She landed at Western after falling in love with the campus on a trip with her dad. He studied geology and music at the University, and Mooney had similar aspirations, pursuing undergraduate degrees in aerospace engineering and vocal performance. Taking music classes alongside her scientific studies, she found, helped her excel in the lab.

"When it comes to things like coming up with creative solutions at your job, you have to be creative. I think developing those music skills is something that really helps with the creative side," says Mooney, who also plays cello. "A lot of music theory is built upon core structures that you can relate to math. It was a great experience for me."

Working in concert with Lemmer provided a number of practical experiences to set Mooney on the path to success in the aerospace field. She landed internships through her mentor's professional connections, first at the Naval Research Laboratory for two summers in Washington, D.C. and then at NASA's Glenn Research Center in Cleveland, Ohio.

"I owe my entire career to Dr. Lemmer. She is the reason that I'm able to do anything here. She's the best advisor and biggest advocate I've ever had in my life," Mooney says, adding that Lemmer is the reason she chose to pursue her graduate degree at Western after earning her bachelor's degree in 2018. "I really think a huge part of finding your passion is being in an environment with a lot of supportive people, and at Western we have both the professors and students to do that."