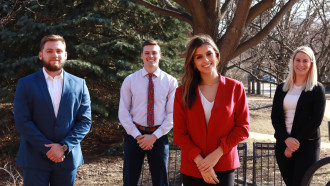 KALAMAZOO, Mich.—A team of two students from Western Michigan University's Haworth College of Business claimed first place at the University of Toledo Invitational Sales Competition. This is the sixth year that WMU has been among the top 10 at the event, placing in the top three in 2019 and 2018.

This year's competition was completely virtual, with 36 schools competing via Zoom. The task was to sell 3M™ 775L Cubitron™ II Discs and the clean sanding system to a recreational vehicle manufacturing team and distributor network.

The competition rounds were progressive, with the students selling to different groups. The final round involved making a presentation to a key decision maker at a 3M distributor who supplies an influential contact in the RV manufacturing industry.

In addition to being named the top team overall, both Fabish and Jarjoura earned spots in the final round individually—WMU was the only university to see both students on the team advance in the individual finals.

"After just one sales class in the fall, I was invited to compete in this collegiate-level competition and could not be more grateful for what is an experience I will always remember," says Fabish. "During our preparation sessions, I learned some of the most valuable information so far in my college career. Thanks to the efforts of Dr. O'Reilly, Nicole DeFord, Ryan Demas and Layla Jarjoura, I now feel more prepared for my future professional endeavors and was able to bring home a first-place trophy to WMU."

"Being a competitor in the University of Toledo Invitational Sales Competition has been the most rewarding experience I have had at Western so far," says  Jarjoura. "It was an honor to represent Western and the sales and business marketing program. As a sophomore competitor, I was able to gain so much knowledge about the sales field from our team of coaches. I am looking forward to continuing my education as a sales and business marketing student, with one of the best programs in the country."

Roles were now reversed for the peer coaches, both of whom have competed in sales competitions for WMU Haworth.

"It was a great honor to coach the students in the University of Toledo Invitational Sales Competition this semester, as I was a competitor myself last year," says DeFord. "The team met each week starting in December and put in over 50 hours of preparation time for the event. At each practice, we would role play, teach the art of 'Selling the Western Way' and learn what it takes to compete at such a high level. The team adapted to competing in a virtual environment and had the opportunity to safely use the technology in the Robert S. Kaiser Sales, Negotiation and Leadership Lab on campus. It was very rewarding to be on the other side and use all of the sales expertise I now have to help lead our team to victory."

"When we first started training in December, Matt and Layla both had very little sales training and no experience competing in a sales competition. Over the course of three months, we watched both competitors show up hungry to learn. After many weeks of honing their craft, we knew that they were ready to perform at their best. For Nicole and me, the easiest part of the process was the competition day; we knew that they were prepared and had the mindset to win! This will go down as one of the most fulfilling things that I have done in my time at Western, and I couldn't be prouder of all that Matt and Layla have accomplished," says Demas.

The sales and business marketing program at WMU Haworth is nationally recognized as one of the best sales programs in the country with 14 consecutive years on the Sales Education Foundation's list of top programs and a No. 1 ranking from Study.com.