Redefining Normal: Alumni find strength in each other to inspire a new generation

Alexis and Justin Black sit together in their new home.

Stability is a sanctuary, and for the first time in their lives, Justin and Alexis Black have found it. Both overcoming insurmountable odds as kids navigating the foster care system, they discovered love—and purpose—at Western.

"Being former foster youth, we never really had examples of healthy relationships around us," says Alexis, who survived years of abuse by her biological father and later her boyfriend. "We went most of our lives not really understanding what that looks like."

"I had at least three generations of domestic violence on my dad's side and two generations of drug abuse on my mom's side. So those realities of poverty and abuse and turning to negative things for mental health issues and so many other situations in life were normal," adds Justin, who grew up on the southwest side of Detroit and entered foster care at 9 years old. "We were often homeless, or when we did have a house, we didn't have heat or water. We got to a point where we lived in an abandoned house when we were on the run from Child Protective Services."

The pair share their challenging journeys to overcome in their bestselling book, "Redefining Normal: How Two Foster Kids Beat the Odds and Discovered Health, Happiness and Love."  The memoir lays bare the wounds of their childhood and highlights the support they found in Western's Seita Scholars Program—a comprehensive support and scholarship program for students who have experienced foster care—and each other to build the lives they dreamed of having.

Impressive in their own right, Alexis and Justin’'s success stories are miraculous considering the odds stacked against them. According to the National Foster Youth Institute, only 56% of foster youth graduate high school and less than 3% graduate from college. While there are many contributing factors, the seeds of doubt planted by years of neglect and abuse can be overwhelming. 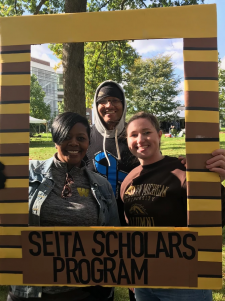 Justin and Alexis Black pose for a photo with Ronicka Hamilton, left, director of the Seita Scholars Program.

"For a long time, I felt that I wasn't worthy of going to college," Justin says. "It wasn't until maybe my junior or senior year (in high school) that mentors around me gave me the confidence to apply. They suggested I go to the Seita Scholars Program because they had connections, and they knew that the campus coaches would help me and also hold me accountable."

While Justin found his support system in school, Alexis drew encouragement and guidance from her foster parents—both Western alumni—who later adopted her.

"When I came to Western, that was the first time I really felt like I had a community; I had people around me and felt stable," Alexis says. She remembers meeting her future husband the summer before her junior year. They had both moved into Henry Hall for the Seita Scholars Early Transition Week—coincidentally the same residence hall Alexis’ adoptive parents met their first year.

"I have a text from my mom saying, ‘You never know, you might meet your somebody.' And then, like an hour later, we meet!"

At first battling their own insecurities, the pair found calm in one another they had not felt before.

"Because we've had so many oddly similar circumstances we've gone through, it makes us a lot closer," Alexis says. They tested boundaries and confronted doubts rooted in the traumas of their past, but they also pushed each other and encouraged each other's growth through faith and communication.

"We both had to learn that we're not meant to be independent completely," she says. "We're meant to be interdependent and rely on the people around us for that support, to share the burden, share the lows, to celebrate successes but also the negatives in our lives. As former foster youth, that was one of the most difficult realizations we had to come to." 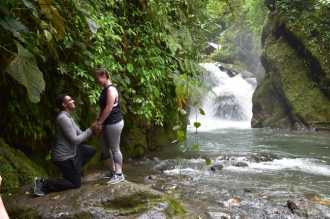 Leaning on each other, they continually pushed one another to pursue their passions, including travel. Their time at Western took them around the globe. Experiences in Africa, Asia, South America and Europe expanded their views of the world while also bringing them closer to each other. In 2018, in front of a waterfall in Ecuador, Justin proposed, adding marriage to the list of adventures they’d tackle together.

The couple started 2020 on a plane to South Africa. They'd spend Justin’s final semester at Western studying abroad while Alexis operated their company The Scholarship Expert remotely. Mid-flight they started kicking around the idea of writing a book together.

"This started as an exercise to get closer together before we got married, but then it turned into something much bigger than us," Alexis says.

Less than two months into their stay in South Africa, life threw another curveball. As COVID-19 became an emergent global health threat, the Blacks were thrust into an emergency evacuation effort.

"We were freaking out, trying to figure out what to do. But my mom said, 'You know, you can come home,'" Alexis says. "I didn't really think to ask her. I'm so used to being independent; we figure out things for ourselves. But when she said that, it relieved so much pressure."

The Blacks quarantined in an RV in her parents' driveway after returning home from overseas. Determined to maximize the opportunity given to them, they began to think about their next move. Just months away from graduation and in the grips of a lockdown, the pressure of uncertainty weighed on Justin.

"One week I'm in South Africa, nice weather, meeting new friends, and the next week I'm in cold Northern Michigan quarantining in an RV, a global pandemic is going on and I don't know what to do. I'm trying to find jobs and a steady income," he says. "I dealt with so much depression and anxiety. But from that depression and anxiety, I kept pushing through and learning to be persistent."

Turning uncertainty into opportunity, the couple began writing the book they conceptualized just months ago. "We maximized every single day. We worked at least 15 hours a day, sometimes more."

By November, they were published authors. "Redefining Normal" debuted at No. 1 on three Amazon bestseller lists, hailed by readers for its raw look at the challenges facing foster youth and the courage and work it takes to overcome them. Everyone's journey may be different, but the lessons laid out in the book are intended to transcend circumstances. 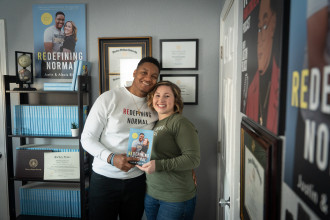 "When you read our book, you can take our lives out and put your life in and question how you deal with mental health. Who created your definition of love? How do you establish community?" Justin says. The pair have big dreams for their book, hoping it will become common reading in college programming. They are working on a companion guide right now.

"We grew tired of merely surviving. We wanted to live a life with greater meaning—with greater purpose. We wanted to serve people, because we believe that we have a duty to others, especially future generations," they say in their book, which also pays it forward by donating a portion of the proceeds to organizations that support foster youth, including the Seita Scholars Program. "We are breaking cycles of generational dysfunction. It stops with us."

In addition to being authors, Justin and Alexis Black are mentors, helping students maximize their scholarship potential and emerge from college debt-free with The Scholarship Expert and teaching youth the importance of self, community and impact with Rising Over Societal Expectations (ROSE) Empowerment Group—an initiative apart from the Redefining Normal company.

"We're hoping to be positive examples to other people who may not have gone through what we've gone through," Alexis says. "One of our biggest mantras is that we want to die empty; that everything that's in us—all the knowledge, all of the experiences, everything—I don't want that when I die. I want to give that to other people. I want to pour that out to the world around me." ■ 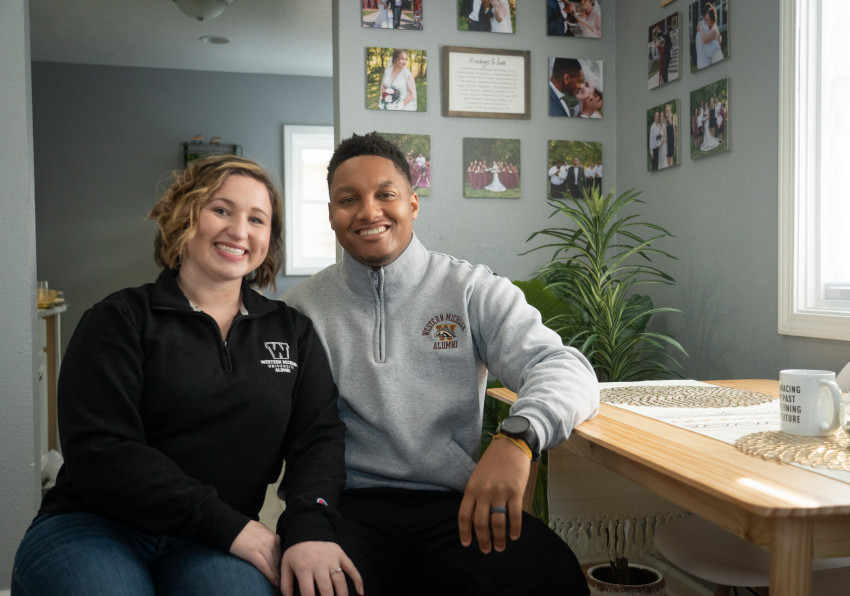