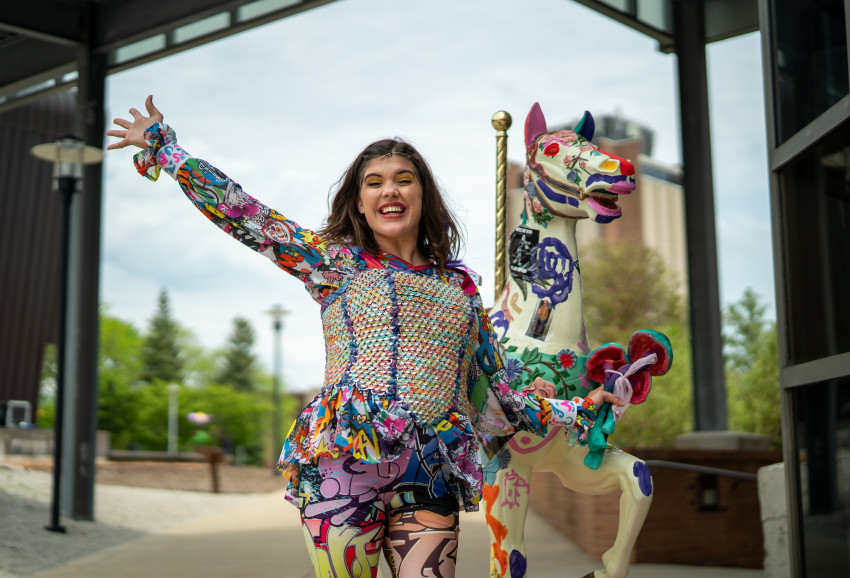 Margaux Wellman is excited to play Puck in Western's production of "A Midsummer Night's Dream."

KALAMAZOO, Mich.—Puck is a chaotic force in Shakespeare's "A Midsummer Night's Dream." In taking on the role in Western Michigan University's production, student Margaux Wellman also hopes to shake up perceptions about disabilities.

"Disability is not talked about often enough. So when people come to see our show, maybe not knowing that I have cerebral palsy, and the first person they see walk on stage is me—whoa! What does that do?" Wellman says. "I really hope it starts that conversation; that's something I'm really passionate about. It's a huge part of who I am. It's a lot of why I am who I am. So why wouldn't I talk about it?" 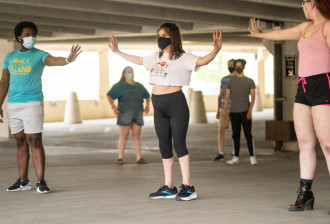 Wellman rehearses with her castmates.

Cerebral palsy (CP) is a group of disorders that affect movement and muscle tone. When she was younger, she underwent several surgeries and used a wheelchair at times. Today, it impacts her posture and causes her to walk with a visible limp, but she doesn't let those differences define her. She credits her confidence to the way her parents raised her, treating her no differently than her siblings.

"Yes, I'm disabled, but I'm going to do everything everyone else is doing, just maybe in a different way or in a different capacity. And that's always been the thing for my whole family," says Wellman, who ran cross country alongside her sisters in middle and high school in their hometown of Saginaw, Michigan.

Growing up, however, Wellman was acutely aware of the lack of people who looked like her in the TV shows and movies she watched. She found a ray of hope while reading a magazine that featured Abbey Curran, the first woman with a physical disability to compete in the Miss USA pageant, who had created  Miss You Can Do It, a national pageant for girls with disabilities and challenges just like her.

"As soon as I read the article, my mom got in touch with Abbey and registered me for the pageant in 2008. The rest is history," says Wellman, who won the pageant's national title in 2009 and 2011. Filmmaker Ron Howard created a documentary about the pageant, which Wellman was featured in. "It was such a surreal experience to be a part of. I met people who I still keep in touch with today. What a beautiful gift!"

Through the pageants, Wellman discovered her love of motivational speaking and began to think about a future where she could use the arts to advocate for people with disabilities. It inspired her to pursue a career in theatre. She found a place to explore her passion and develop her communication skills at Western, where she is double majoring in theatre and interpersonal communication. 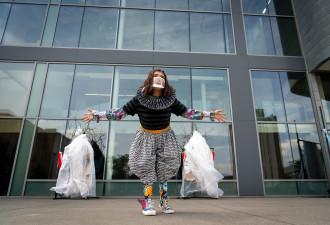 "I started off in communication studies with hope for a focus in motivational speaking, and the more I took communication courses, the more I was really interested in what makes people tick. Looking at why I might talk to one person differently than another, how the environment affects that, how mental capacity affects that," says Wellman, who will graduate in the fall.

She's also had the chance to really embrace who she is as an actor and build on her own strengths.

"Our theatre department is not a traditional cookie-cutter department. The professors don't try to build students into this perfect performer who can do everything. They ask, 'Who are you? Let's find out who you are. Let's explore that as a creator.’ It's been super fun."

Throughout her time at Western, Wellman has been involved in multiple theatre productions. Her favorite experience so far, however, has been her lead role as Puck in "A Midsummer Night's Dream."

"It's been so incredible. This is the first show that I've done where, from the get-go, I've had a conversation with our director, our assistant director and our movement coordinator about what it means to be disabled and to be doing theatre," she says.

"We have had multiple conversations about where Puck's power comes from. Because, specifically, when we think about a disability, in general, a lot of times able-bodied people think it's a disadvantage or it's something sad or upsetting. But what if CP is a superpower? Because I think it is. I mean, I've had it for 22 years of my life, and it is my superpower."

With that power, she says, comes a sense of responsibility to reduce stigma and open doors for other people with challenges. 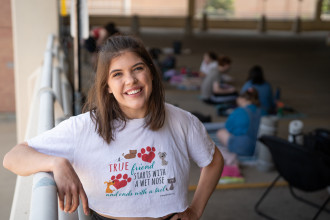 "I'm going to use my voice for change, for advocacy," says Wellman.

"One thing that my mother taught me is that if you have a voice, you use that voice," Wellman says. "I'm going to use my voice for change, for advocacy. And I do feel a responsibility, but it's not a heavy burden. It's just something that I love doing because it's such a big part of me."

WMU Theatre's outdoor performances of "A Midsummer Night's Dream" will run for three weekends beginning Saturday, May 22. The complete schedule and ticket information are available on the department's webpage, along with information about "The 25th Annual Putnam County Spelling Bee," which began May 21.