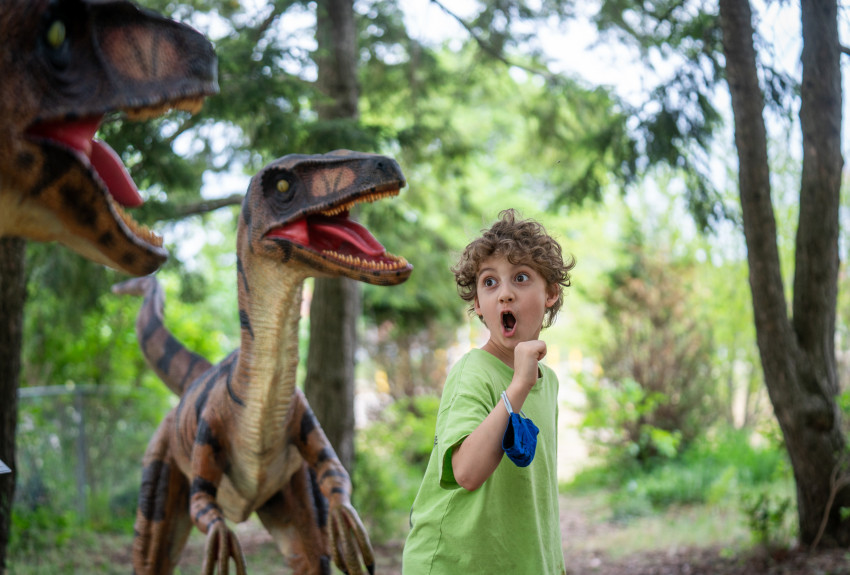 Jared Lipsey, 8, thinks about making a run for it while checking out the utahraptors.

KALAMAZOO, Mich.—There are things you'd expect to see on a college campus: students sprawled out studying, bicycles parked in racks, frisbees being tossed about. But a brontosaurus towering over the entrance to a building? Western Michigan University is taking a walk into uncharted territory with a park straight out of the Mesozoic era that will expand educational opportunities for students of all ages.

A dinosaur park, dreamed up by the Department of Geological and Environmental Sciences, is drawing enthusiasts to campus from across the area. It turns back the clock 252 million years, allowing visitors to walk among titans of the Triassic, juggernauts of the Jurassic and creatures of the Cretaceous.

"The whole idea was, how do we engage the community more?" says Dr. Robb Gillespie, senior research associate and lead designer of the park. "Just in the past month, it's been packed with parents and kids. It just took off!"

"The community interest is really exciting," adds Dr. Heather Petcovic, chair of the Department of Geological and Environmental Sciences. 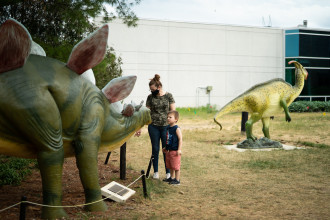 Vanessa Smith and Easten Weber, 4, check out the stegosaurus.

Located behind Lee Honors College, on the northeast side of Rood Hall, the park currently features favorites like stegosaurus, triceratops, parasaurolophus, spinosaurus and a pair of utahraptors, as well as ferns that existed during the time they walked the earth. It will soon have a new resident: a 17-foot-tall brontosaurus, which is in storage right now waiting to be erected at the entrance to Rood Hall.

"We chose them because, of course, they're really cool dinosaurs, but also because they covered the gamut of time and space and gave us more of a palette to talk about," says Gillespie. "We can walk you through geologic time for the Mesozoic by looking at the dinosaurs and their evolution."

The dinosaurs have generated buzz and become a destination for local families looking for outdoor fun. But there's a bigger picture Gillespie is thinking about.

While you're visiting the dinosaur park, venture inside Rood Hall to check out the impressive collection of fossils, shark teeth, mineral specimens and rocks in the Lloyd J. Schmaltz Geology and Mineral Museum.

"We put the dinosaurs in more as the hook. Then (when you get here) all of a sudden you start learning all this other stuff," he says, hoping the park becomes a gateway for lifelong science exploration. "By getting (kids) onto campus to see the park, they're starting to learn something that will help them follow through wanting to do science in school, and we make it pretty unpainful for the parents to take them there and have some fun."

It also opens the door to future Broncos; when kids enamored by the dinosaurs grow up and start thinking about college, Gillespie and his colleagues hope they remember Western.

"Earth sciences tend to be kind of a hidden discipline; not many people know about it and not a lot of students go to college wanting to be an earth science or geoscience major," adds Petcovic. "This is a great way to get a little bit of interest and grab some future geoscientists while they're still interested in dinosaurs."

While it's already generating excitement, the park is far from finished. The COVID-19 pandemic temporarily put expansion plans on hold, but work is now underway to ramp development back up. Gillespie's vision is to create an interdisciplinary learning area that is as fun for kids as it is educational for Western students.

"I thought, why don't we turn it into an outdoor lab area where we could have rocks that students could measure strike and dip on and we could figure out sequence stratigraphy?" says Gillespie. "We could have dinosaur trails and do things for our dinosaur class, figuring out stride lengths and what kind of dinosaur made them and what the story was." 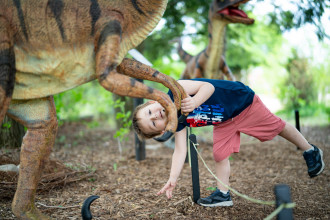 In addition to adding dinosaur tracks and a rock bed, plans are also in the works to add a rock wall in a stairwell on the side of Rood Hall where students could see different rock layers over time. A wetlands area will be added to the center of the park where environmental science classes could conduct experiments. There's even potential to include some physics lessons in the landscape to measure the impact of meteorite strikes.

"We're also going to put a geological timeline where you can walk along the side of the park and look at the wall and see the timeline as it changes through geologic history—through millions and millions of years," Gillespie says. "We're going to make this multi-departmental, tying biology, environmental science, dinosaurs all together. The big idea was to connect the dots, connect the departments, get the thinking out of the silos and start getting kids to see how everything fits together and how knowing one thing lets you figure out the other thing."

The project, adds Petcovic, demonstrates how the University is leading the way in educational innovation.

"I think Western has a big opportunity to expand what we typically think about as learning spaces inside classrooms to include the outside of buildings, and the dinosaur park is hopefully the first of what could be several outdoor learning spaces and outdoor classrooms."