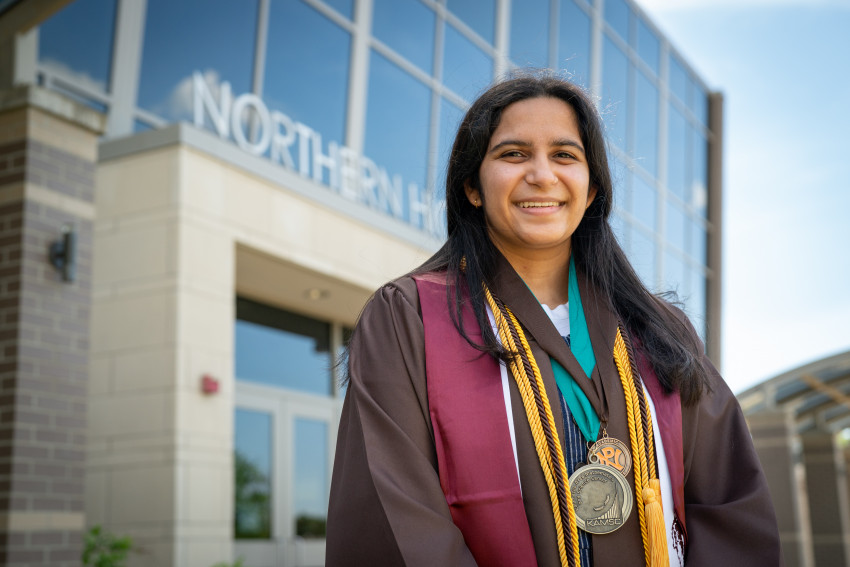 Keshavi Davé will study statistics at Western while also exploring opportunities to incorporate her passion for sports in her future career.

KALAMAZOO, Mich.—Numbers have order. Equations have solutions. Keshavi Davé counts on it because her mathematical mind thrives on problem-solving. And she's calculating a bright future at Western Michigan University.

"I would love to be a statistician one day, and I think Western can help a lot," she says. "I know many of their students get jobs in the fields they are studying."

Davé, of Kalamazoo, will be a first-year student in the fall, majoring in statistics with a minor in data science. While she has some ideas about her future career—ranging from biomedical statistics at a company like Pfizer or data analysis for a sports team—it's the flexibility to explore other potential paths that drew her to Western.

"Compared to other colleges with rigorous and structured programs, I just really liked how flexible Western's math program was," says Davé. "Of course you have to get your credit hours, but it gives me flexibility in the classes I want to choose." 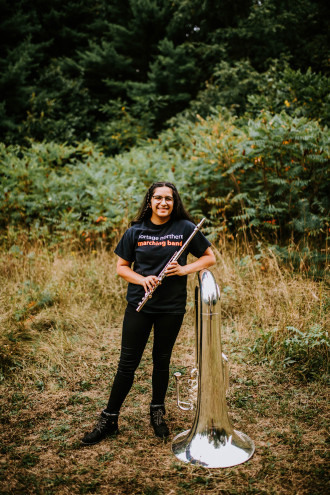 Her penchant for math ties in perfectly with her two passions, whether she's counting steps while marching her tuba down the football field or counting hat tricks from the stands at a hockey game.

"I’m a big sports fan. I love hockey. I love football," says Davé. "I think once I actually start college at Western, I'll get a more defined idea of exactly what I want to do, because most of my family right now thinks I'm going to end up working in the sports industry doing math. That would be cool, but I don't know—we'll test some stuff out!"

She would also love to explore being in a band of some sort on campus, whether that's the Bronco Marching Band, a pep band or in the pit during a theatre performance.

"I just love playing my instruments (flute and tuba)! You get this serotonin boost when you do something right and everyone is working together," Davé says, preferring the physicality of marching band if she had to choose her favorite type of performing.

In addition to traveling down the field, she's also hoping to log some miles in the air in some of Western's many study abroad programs.

"I love to travel, so I can't wait to check out a new part of the world! With my band after my freshman year (of high school) we went to Ireland, and I really want to go back—or at least go somewhere else in Northern Europe," says Davé. Although she's taken several years of French in school, she's more excited to explore colder climates, such as Finland and Denmark.

However far she travels, she's also excited that Western will be home the next four years. In fact, she doesn't even need to leave campus to visit her father, Gaurav Davé, who works in Western's Office of Information Technology.

"I like the idea of having my mom and dad close, especially as I move into this new stage of my life, and it's great to have my grandparents here as well," she says. "Then, after college, we'll see where life takes me!"