Fueled by her own trauma, doctoral student fights to break cycle of sexual violence

KALAMAZOO, Mich.—Trauma manifests in many ways. Tabitha Mpamira became fascinated with its complexities while working in psychology laboratories as an undergraduate at Western Michigan University. But it wasn’t until several years later when she was helping women and girls living in poverty and overcoming sexual violence that she came to terms with her own childhood trauma.

She was volunteering with a nonprofit in a Ugandan village ravaged by HIV/AIDS in 2015 when she had a life-changing conversation.

"I asked around what I could do from a mental health point of view. And this teacher—very nonchalant—said, 'There is a 9-year-old girl who was raped yesterday; maybe you can start there. She's in class.' She said it like it was no big deal. I was shocked," Mpamira says.

She learned the little girl's grandmother couldn't afford to take her to the hospital. And while most people in the village knew who the perpetrator was—he'd admitted his actions and offered the family a goat as an apology—Mpamira says the police would not arrest him without being paid.

"As I was talking to that little girl, it was the first time I connected with my survivor story. It felt like I was looking in the mirror," says Mpamira. She too survived sexual violence in Rwanda when she was 11.

"It hit me that either I was being a hypocrite—that I didn't want to do the work that I was telling this little girl to do—or I didn't think I deserved the healing I was giving others," she remembers. "So that little girl helped me for the first time say, 'Me too.'"

She made the decision that day to launch an organized effort to fight for justice for sexual assault and domestic abuse survivors in sub-Saharan Africa. The timing was tough. Having three small children of her own and beginning the pursuit of her doctoral degree in clinical psychology, Mpamira was a bit overwhelmed at the possibility of starting a new endeavor.

"But the voice (in my head) was clear as day: 'Why do you get the luxury to wait while they are hurting?'" Mpamira says. "It didn't have to be fancy; it was just about seeing the humans in front of me and doing what I can for them. And that's where it began and how it came to be."

She created the EDJA Foundation—now known as the Mutera Healing Foundation—to provide medical attention, mental health counseling and legal help to survivors of sexual assault, as well as education and outreach about female rights and the consequences of sexual assault.

It started small with Mpamira working to find resources for a handful of survivors. The need grew as word spread, but so did her support network. A hospital offered her a free room to work. A nurse who worked there—a survivor herself—volunteered her skills.

"She said, 'I will work for free if you can't afford it because it's the first time anybody is willing to even listen to us," Mpamira says. "So, it started growing like that. And in a short time, with training and educating the community, the number of people understanding this is a problem and being willing to do something about it grew, too." 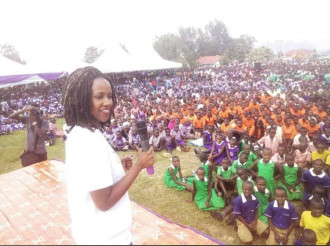 Mpamira speaks to a crowd of thousands at a rally against sexual and gender-based violence in East Africa.

In just six years, Mpamira's organization has expanded its reach to Rwanda and Kenya and helped hundreds of survivors, both female and male, with financial, legal and medical support. It's successfully fought for convictions of more than 70 perpetrators and is challenging deep-rooted shaming and shunning of sexual assault survivors with widespread outreach through workshops, broadcasts and demonstrations. Mpamira herself led the first known walk against gender-based violence in East Africa in 2018, rallying thousands of people from police and civic officials to families and children to support the cause.

"It takes all of us, adding our pieces to it, to create the change. The people on the ground, even those girls breaking their silence, are doing something to help the next girl do the same," she says.

Mpamira's work has been recognized internationally, earning her the Female Founders Alliance Advocate Award in July.

"This award or any kind of visibility is to also tell those who will never tell their story or those who feel alone that someone is willing to listen and someone believes them. And we're going to work until we can't work anymore so that it doesn't happen to another person," says Mpamira. "It's visibility for all the ones that have gone unseen. All the stories that will never get to see the spaces that I've been privileged to be in."

Empowered to become a voice for the voiceless, Mpamira has been invited to speak at the Vatican and the United Nations, among other global stages, to share her work and advocate for survivors of sexual and gender-based violence. She recently joined a group of other survivors and allies, led by Dr. Jennifer Wortham of Harvard University, to speak before a high-level panel at the UN about creating a global day of protection, healing and justice for children impacted by sexual violence. 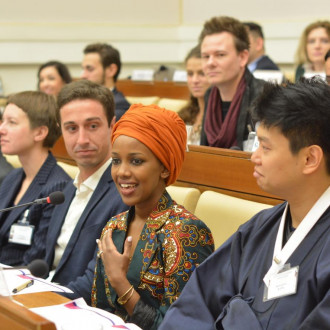 Mpamira speaks at the Vatican.

"How do we hold people and leaders accountable? It keeps me up at night," she says. "What motivates me is that we end this and that my children and the next generations never have to do this again."

In addition to advocacy and leading her foundation, Mpamira is currently working on a doctoral degree in clinical psychology from Western. She plans to use the degree to do more one-on-one work with survivors.

"I love and thrive from that connection in helping somebody transform their lives in a therapeutic way. It's the reason I returned (to the United States), so that I will be able to help more people," Mpamira says.

She credits professors at Western and mentors—especially Dr. Amy Naugle and her cohort, who grew to be family—for connecting her with meaningful research experiences as an undergraduate and fueling her passion to continue her education.

"They invest in you as an individual and also give you space to grow on your own and figure out what you want to do," says Mpamira, who first graduated from WMU in 2006 before going on to get her master's degree in clinical psychology from Ball State University. "To come back and finish what I started in the same place has been a blessing."

Regardless of the titles she earns or the awards and recognition she receives, Mpamira is focused on one thing: being a catalyst for change.

"I know I should feel proud of myself and happy about the impacts and the lives changed thus far, but I end up feeling like, ‘Oh my gosh, there's so much to be done,’" she says. "It makes me feel overwhelmed but also excited that this is just the beginning."