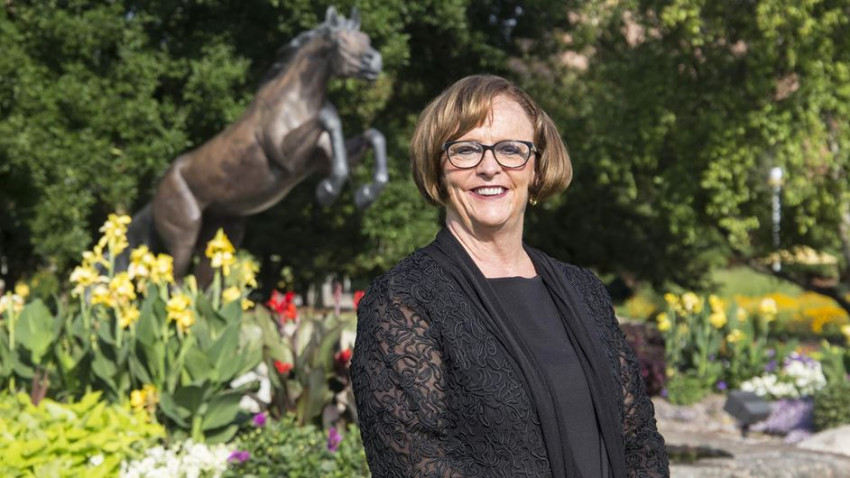 KALAMAZOO, Mich.—Western Michigan University Director of Athletics Kathy Beauregard has announced her plan to retire after 42 years with the University. A nationally known and respected leader in her field, Beauregard has racked up many awards for her leadership in college sports. She is the longest-serving athletic director at the same institution and one of just nine female athletic directors among 130 Football Bowl Subdivision schools across the nation.

"It's been an incredible honor to serve in this University community," said Beauregard. "I'm so proud of what WMU Intercollegiate Athletics has achieved as a team over the years—first and foremost, helping to coach and develop the most exceptional student-athletes in all of college sports."

"It's difficult to step away from them, from my colleagues and what we've built together, but I've been blessed to have a wonderful career. I'm filled with gratitude as this chapter of my professional life comes to a close."

Beauregard's final day on the job will be Dec. 31. The University will immediately launch a national search to identify the Broncos' next director of athletics.

"My family has received nine degrees from this exceptional University. We have made Western our family and been able to raise our son with memories to cherish for a lifetime," Beauregard says.

"We are grateful for AD Beauregard's many contributions to Western Michigan University over the past four decades, both on and off the field, including the memorable trip to the Cotton Bowl in 2017 and producing numerous All-Americans and Academic All-Americans over the years," President Edward Montgomery says. "She dedicated her life to advancing our student-athletes and Bronco pride from the moment she joined WMU to coach gymnastics in 1979, through her years as an assistant athletic director and then head of the division. The results of her leadership speak for themselves."

Beauregard has always had a futuristic view and has been integral to many fundraising efforts that benefit the University and athletic department, including the most recent $550 million Empowering Futures Gift, $50 million of which is earmarked for WMU Athletics. WMU athletic facilities have greatly improved under her leadership. The $8 million Bill Brown Football Alumni Center and the $21 million Seelye Athletic Indoor Center have benefited numerous sports teams and continue to provide top-notch facilities for Bronco student-athletes.

Other major facility projects over the last decade include $2.2 million into the renovation of Hyames Field at Robert J. Bobb Stadium, the transformation of Baker Farm into the WMU Soccer Complex, replacement of the indoor track in Read Fieldhouse, the replacement of the outdoor surface at Kanley Track, locker room updates to Lawson Ice Arena, a new basketball court at University Arena, men's basketball locker room expansion and upgrade, and the installation of video boards at Lawson Ice Arena, University Arena and Waldo Stadium, which features a main video board and two auxiliary video boards at the cost of $1 million each.

"I really never knew when the time would come to consider retirement, since I pride myself on the passion I wake up with every morning challenging myself with how we can grow and commit to championship excellence in intercollegiate athletics and within the University," said Beauregard. "I find myself now in the world of intercollegiate athletics that is in a total state of transformation nationally. This transformation tells me this is the perfect time for me to step aside and retire and for WMU to hire a new leader to steer athletics into the future."

Beauregard has been the recipient of many community and athletic awards and recognitions, including:

Beauregard has also been inducted into the Kalamazoo Loy Norrix High School Athletic Hall of Fame, and she received a Distinguished Alumni Award from her alma mater Hope College.

Her commitment to the Kalamazoo community is evident through many years of volunteer service. She has volunteered with the American Cancer Society, American Heart Association, Big Brothers/Big Sisters, Girl Scouts Heart of Michigan and the Kalamazoo Rotary. In 1999, the Kalamazoo Network presented Beauregard with the "Glass Ceiling Award"; and in 2002, she received the Athena Award from the Kalamazoo Chamber of Commerce. The latter award recognizes individuals who provide service to the community, demonstrate excellence within their profession and assist women in attaining leadership skills and professional goals.

Over the last 25 years through her volunteer service, Beauregard has set an example for Bronco athletes to step up and serve the community. All 350 student-athletes and Bronco staff members volunteer in the community.