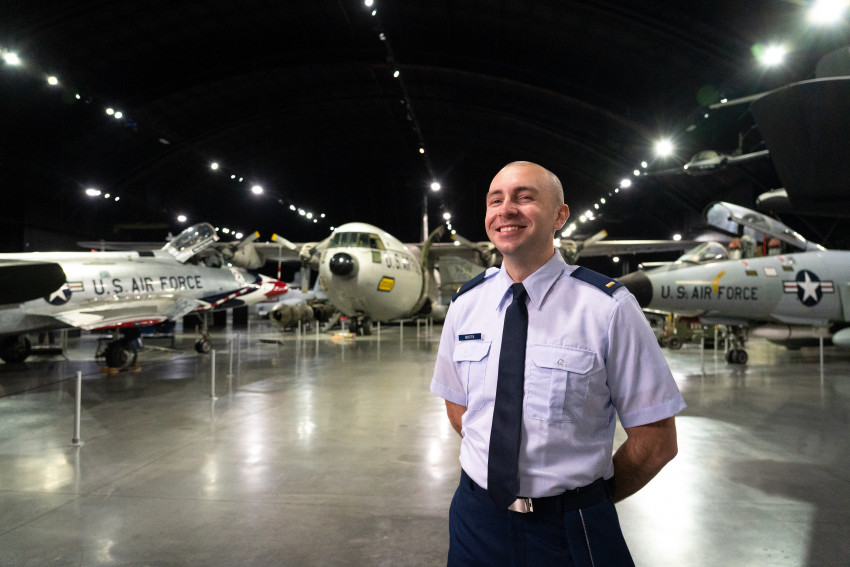 DAYTON, Ohio—Researching and developing engines that could power intergalactic missions sounds like a job description ripped from the film script of "Men in Black." But there are no sleek black suits among the ranks of the United States Space Force—an elite group of military personnel known as guardians working to protect America's interests in space. Western Michigan University alumnus Lt. James Mostek was among the first service members recruited to the team.

"Ever since I was a little kid, I've always been super interested in space and space technology," he says. "To be working on that kind of stuff now is really cool."

It was the work Mostek did in Western's aerospace engineering program that piqued the interest of a military recruiter shortly after he graduated in April 2020. 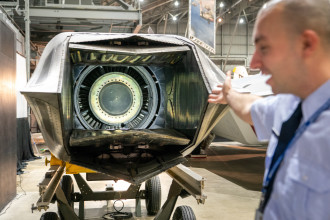 Mostek gestures toward the inside of a jet engine.

"He started looking at my background, and I had worked on a bunch of really cool projects at Western," Mostek remembers. His work on the Western Aerospace Launch Initiative (WALI) and as a research assistant in the WMU Space Flight Dynamics and Control Laboratory were among the experiences that stood out, making him a great candidate for the Space Force—then a newly created division of the Air Force responsible for organizing, training and equipping guardians to conduct global space operations that enhance joint and coalition forces.

After completing officer training, Mostek was assigned to the turbine engine division at the Air Force Research Labs at Wright-Patterson Air Force Base in Dayton, Ohio, where he does research and design work on rocket engines as a developmental engineer.

"I'm basically working on internal dynamics of turbine engines, finding model frequencies to make the engines operate more efficiently," he says. "The Space Force does a lot of other work, but basically we're charged with all new technology that goes into space and the security behind it, making sure that security isn't compromised."

SHOOT FOR THE MOON

Mostek saw a career in aerospace engineering on the horizon when he arrived on Western's campus in 2015. But the challenging coursework nearly sent his path into a different orbit—from rockets to rocks. 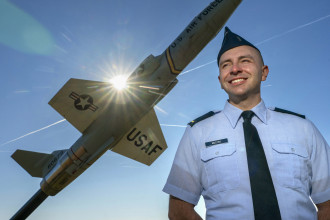 "I went right into it but a couple of years in I was like, 'Wow, this is very difficult.’ I started thinking about switching to geology," says Mostek, who grew up in suburban Chicago. "Then I figured I'd already made it that far, I should just stick it out. And I'm very happy that I did."

"When I started getting involved in WALI, I started to see what I was learning put into action. That helped a lot," he says. "Western offers so many different opportunities, and the community that comes with those offerings by getting involved in different projects and meeting people doing the same thing that you're doing really, really helps keep morale high and keep you chugging along."

As a member of WALI, Mostek designed a system that would feed gas into an electric propulsion system on the team's CubeSat. He also explored orbital mechanics and dynamic modes of systems.

Mostek built on that satellite knowledge when he secured a research assistant position with Dr. Jennifer Hudson, associate professor of aerospace engineering.

"We had a set of satellites that were orbiting the Earth, and we were charged with determining how to reduce fuel consumption of another satellite that would rendezvous with them during their orbital sequences and attend to any needed maintenance to further their life expectancy," he says. Mostek credits Western's stellar engineering faculty, including Hudson, Dr. Peter Gustafson and Dr. Slobodan Urdarevik, for his development as an aerospace engineer.

The first service member in his family, Mostek feels a sense of pride to be able to use the skills he honed at Western for a higher purpose.

"My parents gave me a good life and I thought this would be a great way to be able to give back to the community," he says. It's also allowed him to push the limits of his knowledge and take his career to new heights.

"Down the road, I plan to work on more orbital mechanics and deep space technology. But for now, I'm starting off with these specific projects that will eventually get me there. You've got to start somewhere!"