February is Black History Month, an annual celebration of achievements and a time to recognize the important role Black history plays in U.S. and Western history. This month, the University is celebrating Bronco alumni who’ve inspired change, pushed boundaries and paved the way for so many.

"I actually wanted to be an astronaut," she says over video conference from the bench in Kalamazoo County's 8th Circuit Court—a position she was appointed to by Gov. Gretchen Whitmer in 2021. Parker-LaGrone even chose her college, Fisk University—a historically Black college in Nashville, Tennessee—for its internship program with NASA. But her cosmic aspirations were quickly jolted back to Earth soon after she started. "My freshman year I quickly realized how much I did not like math." 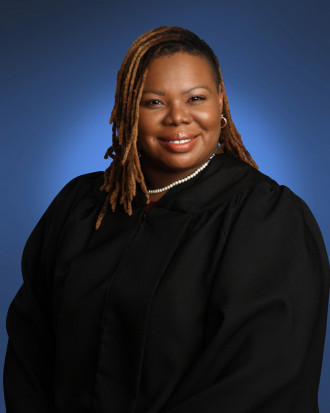 That realization, along with an accidental enrollment in a political science class, helped launch a career more in tune with her passion and put her in a position to help countless others change the trajectory of their own lives.

"A big part of why I went to Nashville is I had grown up in Kalamazoo and I just wanted to get away," she remembers. Being one of six children and the daughter of a man heavily involved in the community—the Kalamazoo Gazette once dubbed Charles Parker "Mr. Everything"—she felt the need to spread her wings. "You see things sometimes when you go back to your hometown as an adult that you didn't really understand or fully appreciate as a young person. And I think in my young adult years I really started to appreciate how one could build a career and community and family here."

She built her professional prowess rising through the ranks at Legal Services of South Central Michigan, finding purpose in public interest work. At the same time, she enrolled in Western's Haworth College of Business MBA program.

"Having my master's was incredibly helpful when I managed the legal aid office in Battle Creek for several years," says Parker-LaGrone, who earned her master's in 2011. In addition to practicing law, a large part of her professional work involved management, writing grants and meeting with community partners.

"You don't really learn those skills in law school; we learned how to read, research and write, but learning how to administrate and handle the day to day of what happens in practice—how to run an office, how to create structure around yourself so you can get the things you need to get done—those skills were strengthened through Western's MBA program."

The skills have helped her succeed not only in the office and the courtroom but in the community, serving as a founding member of the Judge Charles A. Pratt Bar Association, chair of the State Bar Diversity and Inclusion Committee, board vice president of Charlie's P.L.A.C.E. and co-founder of Sisters in Business, among other things.

CREATING A NETWORK OF SUPPORT

In a world that can be cut-throat and contentious, Parker-LaGrone leans on community. She sees empowerment and collaboration as the way forward, giving everyone a seat at the table to build a better world.

"There's been so many people who have helped me in so many different ways. So how can I be another person in somebody's life to help them along their way? Because at the end of the day, it's all full circle." 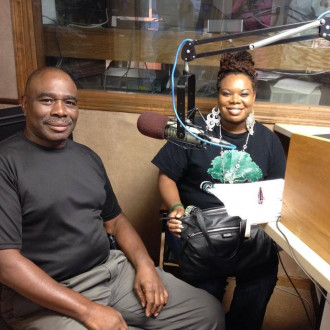 Parker-LaGrone sits next to her father, Charles Parker, the inspiration for Charlie’s P.L.A.C.E.

That sense of creating opportunities for everyone is the backbone of the Judge Charles A. Pratt Barr Association. Named for Kalamazoo's first Black judge, Parker-LaGrone helped to create the organization alongside other legal practitioners of color in 2010.

"It had two purposes. The first was to support other African Americans and people of color in the profession in Southwest Michigan," she says. "And also, how can we, from a public-facing standpoint, be of service to our community? It could be through some type of mentoring or pipelining of young people who are interested in becoming attorneys or providing information to the community about basic rights."

The goal remains to encourage diversity in the legal field and uphold "the continual search for equal justice under the law for all people," a guiding principle throughout Pratt's pioneering legal career, which Parker-LaGrone was reminded of when she received her judicial appointment in 2021.

"I stand on his shoulders and the love of so many who inspire me to live a life of service," she said at the time. "The same way that it was allowed for me, I want that for somebody else, because I don't know what that person's going to be able to do for the world, for this community. And blocking these people from being able to get into positions and create impact really is only blocking ourselves."

LIFTING UP THE COMMUNITY

Advocacy is in Parker-LaGrone's DNA. She and her siblings saw her parents committed to community while they were growing up, and they've carried the torch into adulthood. They established Charlie's P.L.A.C.E. in 2014 to continue their father's life's work, which included running recreational programming at the YMCA, Kalamazoo Parks and Recreation and Kalamazoo Public Schools for decades.

"Knowing the impact he had on so many young people, we thought this was an opportunity for us to springboard this organization," Parker-LaGrone says. The organization's signature program is a summer basketball league, but the work has expanded more recently into things like a communitywide track meet, mother-son dances and Halloween trunk-or-treat events. "It's about bringing families together and multiple generations together, anchored around recreational activities."

In addition to supporting families, Parker-LaGrone and her sisters also dreamed up a movement to uplift women of color in the community. It started with a group text from her younger sister, Nicole Parker, in 2017. She had been doing research for her master's degree related to social entrepreneurship and raised the idea of holding a brunch to talk to some Black businesswomen in the Kalamazoo area. When community-building runs in the family, a lot of business discussions happen over meals.

"Instead of gathering around the table on Sunday to just chit chat, we're often talking about a program that we want to put together. And then the next thing you know, we're implementing it," Parker-LaGrone says.

The sisters thought they might be able to bring 20 or 25 women together for the event; more than 50 women showed up. Sisters in Business was officially born. 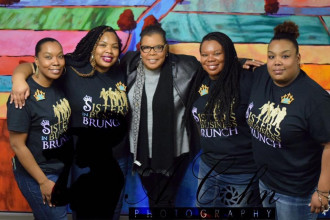 "We realized there are women here who are in business and are looking for support. So we did another brunch in April 2018 and had over 100 women attend. Then it began to really spiral from there into other opportunities," says Parker-LaGrone. "We wanted to support women of color in business by providing easy access and low barriers to funding, so we started doing pitch competitions."

The organization has partnered with different entities in the community to give out nearly $30,000 in funding to local entrepreneurs. It also offers engagement and networking events as well as educational workshops for members. Last year, Sisters in Business partnered with Black Wall Street Kalamazoo to create the Black Entrepreneurship Training Academy (BETA). The program took 10 businesses through a modular series in its inaugural year to learn about things like marketing, legal issues and finance.

"We've seen those businesses that we've really wrapped ourselves around explode over the last year," Parker-LaGrone says. It's also given her a chance to put the knowledge she cultivated in Western's MBA program into practice. "When meeting with business owners I'm able to say, 'Here's why understanding your economics are important, so that you can forecast, so you can tell the story and you can really sell your values. It's not just about dollars and cents, but it's really painting the picture of where you hold value.'"

Community impact is at the heart of all Parker-LaGone's endeavors. From professional mentorship and youth development to her responsibilities as a judge, she knows access and opportunity are crucial to upward mobility, and she is committed to continuing to open those doors for generations to come.

"It comes down to allowing people to be in the best position to thrive and live the life that they want to live for themselves," Parker-LaGrone says.