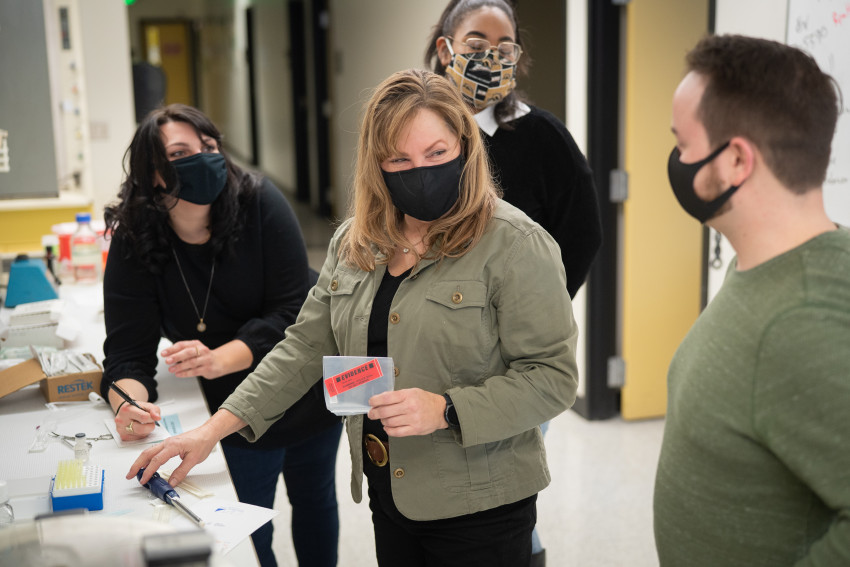 KALAMAZOO, Mich.—Just shy of 35 years after a woman was found murdered in her home in Niles, Michigan, police arrest a suspect. It's a case students in Western Michigan University's Cold Case Program helped breathe new life into after decades of dead ends.

Patrick Gilham is currently awaiting trial, charged with murdering Roxanne Wood in 1987. The case is the first Western students were involved in as part of the new Cold Case Program, which was launched in partnership with the Michigan State Police in 2021. 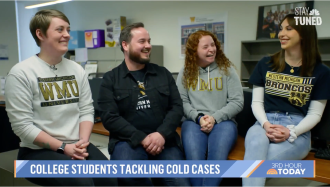 The Cold Case Program was featured on NBC's "Today Show" in April 2022.

"I would call it highly successful in that the first case that we worked together, we were able to, as a group, make an arrest on a case that had been cold for 35 years," says Detective First Lieutenant Chuck Christensen.

An arrest is a milestone in any case, but this one was personal for Christensen. He's been involved in the investigation since 2001 and has had multiple conversations with Wood's brother.

"He has always tried to keep this case in our minds, in the forefront. So, to solve this one—they're all important—but this one, I had a lot of personal time spent on it. And then through the years talking to the family, it's a wonderful feeling to get to this point," says Christensen, cautioning this is only an arrest at this point and there is more investigative work to complete.

Western's Cold Case Program gives students an opportunity to put what they're learning in the classroom into practice. There are dozens of unsolved cases in the southwest district of Michigan alone, but many law enforcement departments lack the time and resources to take another look. Christensen says having students who can handle important administrative tasks that go into the organization of files is a "force multiplier" for his team. 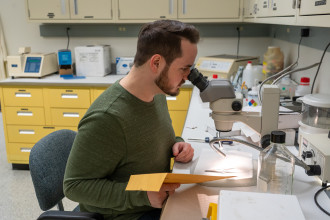 Huber and fellow doctoral student Chlebek put in about 1,200 hours of work on Wood's case.

"Two detectives at a state police post have a major case load already," says Christensen. "To try and do what was done from an organizational standpoint that we were able to accomplish in a couple of months would have probably taken them, with two people working on it, a couple of years."

Program director Dr. Ashlyn Kuersten estimates doctoral students Ashley Chlebek and Carl Huber put in about 1,200 hours of work over eight months on Wood's case, organizing several boxes of files that had been amassed during the investigation over the years.

"Primarily, our goal was to pour over the documents, organize them, scan them and give (MSP) our assessment of what we thought they should look into going forward," Huber says. "When you stop to think about the actual impact that participating in a project like this has on the real world, on the people whose lives were forever impacted by the events that had taken place, it's humbling. It's nice to contribute some small fraction to getting some type of closure and some type of justice." 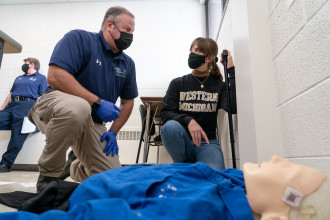 The students had regular meetings with detectives throughout the investigation to identify potential new leads or share loose ends that needed to be tied up.

"We would get into these meetings with the state police and these two graduate students had names memorized, they'd gone through these files really in-depth and were able to connect people together. That takes a lot of time and dedication," Kuersten says, noting the prosecutor is now using the file the students put together in his trial preparation. "It's not like a normal class. It really is more boots on the ground, getting your feet wet."

Chlebek and Huber also had the opportunity to sit in on a conversation between detectives and the suspect in Wood's murder when they first brought him in for questioning.

"We were able to sit in a room and listen to what the detectives were doing in real time in terms of how they were going to approach it," Huber says. "It was very interesting to see the inner workings (of the case)."

Chlebek and Huber got an early start on the Cold Case Program as Kuersten was developing it. The first undergraduate cohort joined in fall 2021, representing a variety of majors. They were able to take part in Michigan State Police homicide investigation training to bolster their investigative skills alongside law enforcement professionals. Kuersten says dozens more students have shown interest in applying. 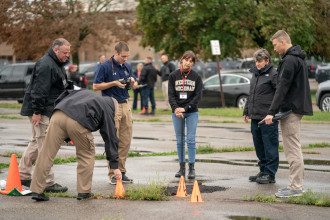 "Psychology, forensics, social work, you know, there are just so many different fields that are relevant to these cold case murder files," Kuersten says. "It's really a win-win situation, because the educational possibilities for students are just phenomenal—not only the research work but also the contacts that they're making."

"Even if the case didn't end up resulting in anything, we still helped the police in some capacity. We still established those community bonds and helped with students gaining knowledge and experience and connections with the field that they want to go into," adds Huber.

Kuersten has fielded calls from other police jurisdictions interested in tapping into the talent in Western's program as well as other universities considering modeling their own programs after this one. Christensen isn't surprised.

"Since I was a young boy, I always knew what I wanted to do: I wanted to be an investigator, a detective," he says. "I would have given anything to get into a program like they have at Western, to be working with investigators on cases that are the highest-level cases that an agency will handle. It's unbelievable to have that opportunity as a student."