KALAMAZOO, Mich.—Kyle Albrecht's future is up in the air, and he wouldn't have it any other way. He's been enamored by flying since he was little.

"It's kind of in my blood," says Albrecht, who will graduate April 30 from Western Michigan University with a bachelor's degree in aviation flight science. Both of his grandfathers flew planes: one as a private pilot and the other fascinated with remote control aircraft. "I would always fly the remote control simulator with my grandfather. And I've been told many times I would play around and crash and crash and crash, but my grandfather worked with me until I was flying a nice pattern and actually flying the airplanes effectively." 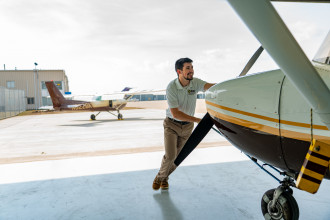 Albrecht moves a plane  in the hangar at the College of Aviation.

Albrecht got his private pilot's license his senior year of high school and hasn't looked back. He was recently accepted into the Delta Propel Career Path Program—one of three professional partnerships available to aviation Broncos—which will give him an accelerated path to his dream job as a commercial airline pilot.

"I was really honored to become part of the program. That was a major reason that brought me to Western, the partnership with Delta," says Albrecht, who grew up in Hartland, Michigan. "Having a top three flight school close to home was massive to me."

"Throughout high school, I was always involved in robotics and wanting to be competitive, always trying to stretch my mind to get to the next level and push myself to be a better person and face new challenges. Flight team has given me that option," he says.

Albrecht competes in simulated comprehensive aircraft navigation, meticulously planning and calculating flight details, such as how long a flight will take between points and how much fuel will be used, as accurately as possible.

"I cannot recommend a better program within the College of Aviation; you become a better pilot and build better connections," he says. "It's pushed my knowledge to a whole different level."

"It was a great way to make a ton of friends here at Western. I go bowling with the flight team guys most Friday nights, and we always try to represent at the hockey games. We're all a bunch of (Lawson) Lunatics."

PREPARED FOR THE FUTURE

Western's aviation flight science program has propelled Albrecht to an elite level. He'll land his degree in three years, and he could have even graduated earlier if he hadn't decided to space out some classes so he could continue competing with the flight team. 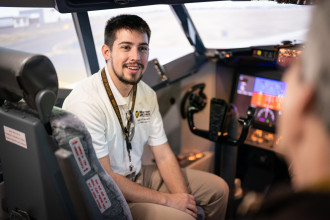 Albrecht is helping develop the curriculum for the College of Aviation's new 737 simulator.

While finishing up his own academic courses, Albrecht also works for the College of Aviation as a certified flight instructor, and he was tapped as a test pilot for the new line-oriented flight training course for the college's new 737 simulator.

"The system is absolutely amazing; it's breathtaking," says Albrecht. "It's super exciting to help develop the curriculum."

He will remain at Western after graduation, working as a certified flight instructor and completing the required flight hours he needs to continue in the Propel program. Albrecht is also considering re-enrolling in an additional degree program so he can continue competing with the Sky Broncos.

The word "busy" isn't in Albrecht's vocabulary. He manages to maintain academics, extracurriculars and job opportunities effortlessly. Turns out, he's a world class juggler—both figuratively and literally. When he's not in the cockpit or on the tarmac, he's often seen jogging around the track at the Student Recreation Center, tossing multiple balls in the air.

If aviation is his first passion, juggling is a close second. Albrecht's sister is a national champion baton twirler, and when she took some lessons from a juggler to help bolster her own skill set, he decided to give it a try.

"It was the summer of 2015," he remembers. "One day, I picked up three tennis balls and just kept trying and trying. Finally, it kind of clicked. I kept wanting to get better and spent the whole summer sitting in front of my TV or going outside and juggling, just getting really good at three." 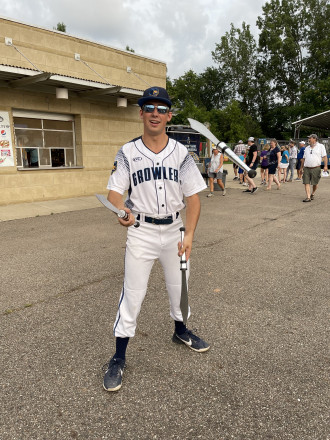 Seven years later, he's broken world records in joggling—sprinting while juggling—and performs at events juggling everything from knives to torches. He was even hired by the Kalamazoo Growlers baseball team to juggle during their home games all last season.

"I absolutely love juggling," he says. "I practically do it in my sleep now."

Albrecht plans to start training soon for another world record attempt. He'd love to make it a big event at Western and share in his achievement with his fellow Broncos.

"As a Bronco, we're trained to be leaders in our field. But it also feels like a family environment," he says. "Meeting people through the dorms was awesome. Making friends through programs was amazing. And being a Bronco is just something that binds us all together.

"I can't wait to be in the airlines and one day be flying next to someone and realize they went to Western," says Albrecht. "I know the conversations will go on for hours, for the whole flight, about all the memories that Western Michigan creates."