Foundation Scholar driven to care for communities in need 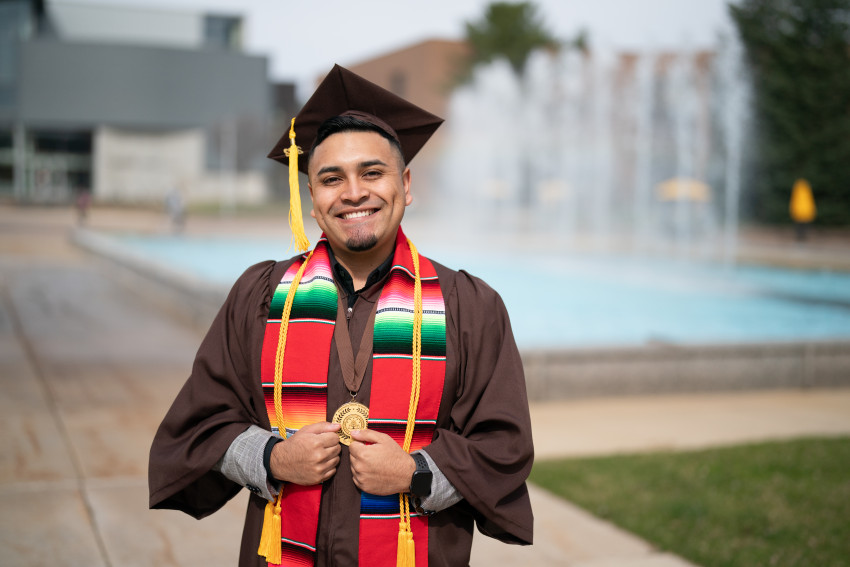 Aunner Calderón's biomedical sciences degree puts him one step closer to his dream of becoming a doctor and delivering a critical service to historically marginalized populations.

KALAMAZOO, Mich.—Just seven years ago, Aunner Calderón didn't speak a word of English. On Saturday, April 30, he will graduate with honors from Western Michigan University—a full year ahead of schedule—with a degree in biomedical sciences and a world of possibility in front of him.

"I grew up in an underprivileged area in Guatemala where education and health care services are just luxuries that rich people can enjoy," he says. "Never did (my family) think that any of us were going to have the opportunity to go to college. And now that it is becoming a reality, we are realizing that the possibilities of our future are only limited by the depth of our own imaginations." 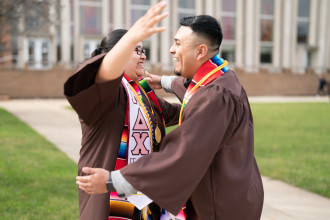 Calderón hugs Jessica Cortes, a fellow Foundation Scholar who is graduating this semester. She also served as president of the Latino Student Alliance, which Calderón is part of.

Calderón plans to spend a year completing medical research before applying to medical schools and ultimately becoming a physician. His goal is to work with historically marginalized populations, both in the United States and on mission trips to his childhood village in Guatemala. His dream is inspired by a sibling he never met.

"My mother's first child was a little girl named Rosemary, who a week before her first birthday became ill. Because my parents were living in extreme poverty, they did not have the means to take her to the hospital. And as a result, a week later on her birthday, my sister passed away," Calderón says. "So, I always understood that I wanted to pursue a career in medicine. However, in Guatemala that is something that was not going to happen."

In addition to the heartbreak of loss, Calderón says his mother suffered years of abuse at the hands of his father. In 2015, she decided to flee the country to save herself and protect her five children. They ended up at his aunt's house in Grand Rapids, Michigan, with little more than the clothes on their backs.

As he worked to navigate a new culture and country, Calderón was enrolled in Grand Rapids Union High School's Newcomers Program for non-English speakers—a year-long course designed to teach language and other basic skills necessary to complete a secondary education. He did so well that after the first week, his teachers decided he was ready to join the freshman class. But bullying nearly derailed his education before it started.

"At first, it was devastating; I didn't want to go to school anymore. I told my mom I just wanted to work like my older siblings were doing to help with the house expenses," he remembers. "But my mother didn't allow me to do that. She said that in order to have a better future, I needed to have an education—not only for myself but also to inspire those in my family and to help those in my community."

Calderón took her advice to heart and doubled down on his studies. He didn't speak up in class for fear of being bullied for his broken English, but he did stay after school every day to get extra help from his teachers. He also read children's books, which were all he could understand at the time, watched movies in English and listened to American music to sharpen his listening and speaking skills.

The strategy worked, and he finished freshman year with a 3.9 grade point average. Calderón's confidence continued to grow and by the time he finished his senior year, he'd already completed dozens of college credits at a local community college. And the once timid teen afraid to speak up in front of his classmates was named valedictorian of his senior class, delivering a commencement address in front of hundreds of people.

"I never could have done it without my mother's support," he says. "She always taught me to see challenges in life as nothing more than opportunities to grow."

"It became important for me to determine which institution was going to offer more emotional support, because I understood it was crucial for my academic success," says Calderón. "I felt that way most at Western Michigan University, and the biggest reason was the Foundation Scholarship."

"When you are a student with a similar background to me, the imposter syndrome eats you alive," says Calderón. "I remember my first semester, I wanted to drop out because I didn't feel like I deserved to be here. And Mark made me realize that despite my background, despite the way that I spoke, despite the way that I lived, that there was a place for me at this University and that I needed to be here, because I had a mission in life to become a family physician and change other lives." 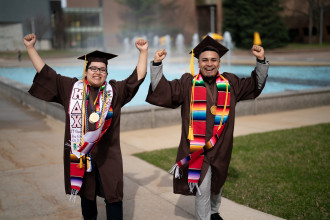 Cortes and Calderón celebrate their accomplishments.

Delorey also connected Calderón with a doctor Dr. Carrie Sandborn, whose practice primarily caters to underserved populations, who he has been able to shadow and learn from.

"She's helping those who need it the most, and she has become an incredible mentor  and role model for me," Calderón says. "She has helped me understand that being a doctor doesn't make you a good human being; being human makes you a good doctor."

In addition to broadening his knowledge base in the classroom and in the field, Calderón, a chemistry minor, volunteered his time to tutor classmates in his favorite subject, organic chemistry.

"While doing this volunteer work, I realized that I was really helping students—and not only helping them understand the material but also to develop a love for organic chemistry, which is really difficult to do," he says.

Service is a pillar of the Latino Student Alliance, a Registered Student Organization Calderón joined alongside some fellow Foundation Scholars. He was also invited to become a member of Phi Beta Kappa, the nation's most prestigious academic honor society.

"For my family, it's a huge accomplishment because, again, we came from a poor village where most students only go up to sixth grade. And now I'm the first one in this little village that is graduating with a college degree, so it is definitely very emotional."

As he prepares to walk across the stage at Miller Auditorium to accept his degree, he's confident in taking the next step in his career because of the support and empowerment he found at Western.

"I came to this University with the mindset that I was going to be part of an institution that is not only diverse but also cares about the success of our students," Calderón says. "To be a Bronco is to be part of a community—people who will definitely help and support each other."