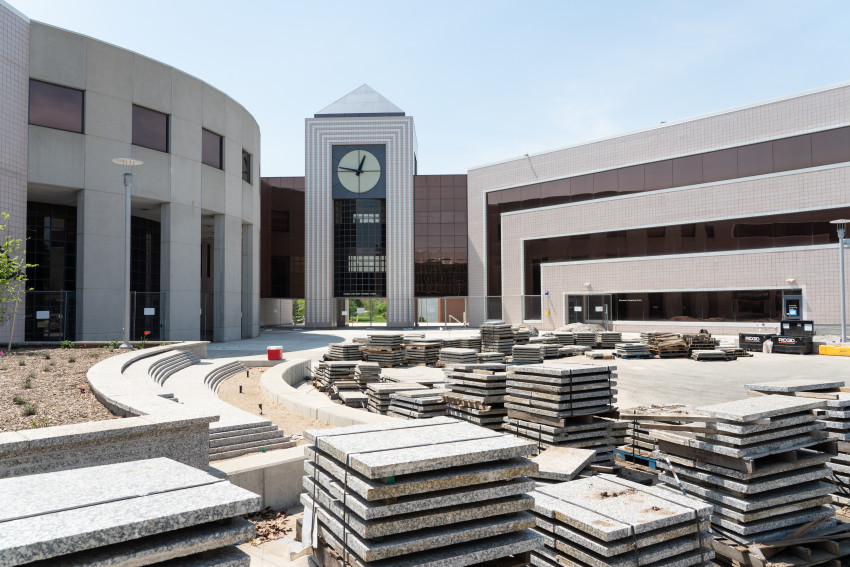 The renovated Board of Trustees Plaza is taking shape.

KALAMAZOO, Mich.—Dozens of construction projects are underway this summer on Western Michigan University's campus. And when the dust settles in the fall, the Bronco community will notice some big changes, including sprawling new green spaces, pristinely paved paths and even a towering new dinosaur.

Western's facilities management team has a total of 34 major projects—as well as several smaller projects—on its slate this summer. Many include routine maintenance such as paving, painting, resurfacing and lighting improvements while others include full-scale demolition and renovation. 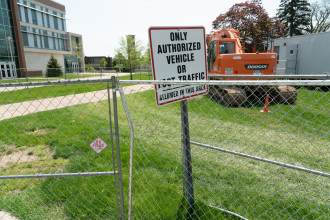 Sidewalks across Main Campus are getting a facelift.

Fencing is currently up around central campus areas for sidewalk paving and renovation. A central open space redesign was put in motion late last year, drawing input from across campus about reimagining the main thoroughfare between Haenicke and Sangren Halls.

The new design aims to be more accessible, welcoming and sustainable while making pathways easier to navigate. It includes improved lighting and covered seating areas that are wheelchair accessible as well as tables with charging stations. There are also rain gardens between the two main paths to filter stormwater, and several trees will be added to the landscape.

Construction also includes removing the sundial and sculpture in front of Lee Honors College in order to remove the steps and make the area more accessible. A new sculpture, however, will be erected nearby at the entrance of Rood Hall: A towering brontosaurus will now greet guests in front of the dinosaur park.

Sidewalk detours in the central areas of campus are expected to remain in place until construction wraps up in the fall. 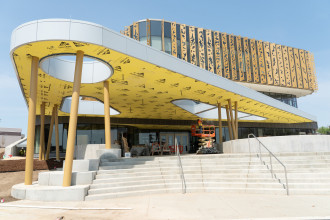 Crews work on a patio at the new student center.

Work on the new student center continues. The week before last, workers observed a vibration that the construction company wanted to study further. It is standard practice for the construction company to be responsible for a job site until work is finished and it is handed over to the owner, which is the case in this instance where possession will be turned over to Western upon completion. On May 5, 6 and 9, exterior work continued while the interior of the site was closed for inspection and interior crews were sent home out of an abundance of caution. On those days project architects, engineers and construction teams conducted a comprehensive review and inspection.

By Tuesday, May 10, the project team had verified that crews could return to most work areas without concern. They also identified some beams that will benefit from additional reinforcement as construction is completed. Whether there will be any impact on the timeline and delivery of the building to WMU is not currently known. The University will have an update in early June whether the new design solutions will have any impact on the timeline and to what extent.

BOARD OF TRUSTEES PLAZA 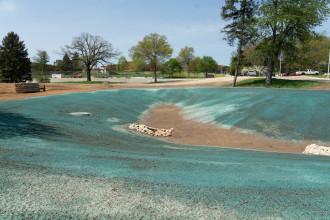 Grass seed has been spread across areas on campus where outdated buildings were removed.

Work on the new Board of Trustees Plaza is nearing completion. Located in the heart of Main Campus between Waldo Library and the new student center, crews are using granite salvaged from the former Upjohn Company headquarters to construct a new stepped fountain area. It is expected to be finished by the end of June.

Demolition of some of the campus' outdated, inefficient buildings will both reduce the University's carbon footprint and increase green space across campus. That includes the leveling of Goldsworth Valley Apartments as well as the "Little Three"—Zimmerman, Davis and French Halls—where a new stormwater retention area will alleviate flood concerns for nearby buildings. Top soil and grass seeding work for both areas is expected to wrap up by the end of May. Two parking lots adjacent to the apartment building site will be removed in July and seeded in August.

Welborn Hall, which formerly housed the Paper Pilot Plants and Lewis Walker Institute for the Study of Race and Ethnic Relations, is currently undergoing abatement and planned for demolition later this summer as a future green space along with Henry Hall, which is slated for demolition next year. 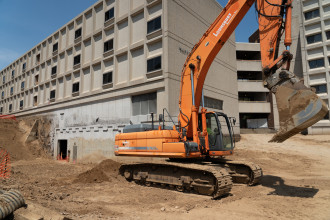 Dunbar Hall is expected to reopen in fall 2023.

Great progress has been made in the renovation of Dunbar Hall, which is slated to be finished in fall 2023. The building has been stripped to its structural skeleton and will get a contemporary remodel, pairing state-of-the-art learning environments with innovative sustainable features, such as two living, vegetative roofs and an upgraded, energy efficient utility infrastructure. The building will include active learning classrooms, a dance studio overlooking Miller Plaza and a cutting-edge podcasting and broadcasting suite.