KALAMAZOO, Mich.—While honing his skills on some of the most technologically advanced training equipment in the aviation field, a Western Michigan University student earned national champion status by going back to the basics: making paper airplanes.

"This whole thing has been really wild. I never expected I'd be telling my friends that I'm a paper airplane thrower and I'm going to do it competitively," he laughs.

Cooper's foray into flinging folded flyers began by chance when he showed up for work one day as a line service representative at Western's College of Aviation. 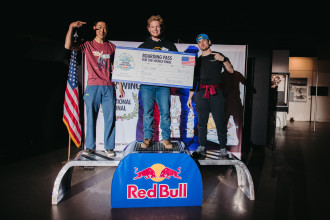 "I wasn't even scheduled that day, I just needed some extra hours. But when I got there, none of my friends were in the break room. So I went down to the hangar," he remembers. He found a DJ playing music, Red Bull displays and tables full of paper for folding planes for a Red Bull Paper Wings Qualiflyer event. "They were all just messing around throwing airplanes, so it really was kind of a fluke that I showed up that day."

Cooper decided to put some of his aerodynamics lessons to the test, working the angles to create a glider that could stay in the air as long as possible. He ended up taking first place in the airtime competition with a time of 4.97 seconds, which earned him a spot at the Red Bull Paper Wings National Finals in Dayton, Ohio. But with double-digit hang times among elite paper aviators, Cooper had to sharpen his skills to compete at the next level.

"After work, I would go into the hangar where we did our competition and just practice throwing the design I was going to make. I had a couple iterations of it," he says. "The most important part is how it crests out at the top. If it can do that, when it reaches its highest point then it automatically starts gliding back down. I think that's the most ideal situation."

Cooper's hard work paid off. In Dayton, among dozens of competitors from colleges across the country, he nearly tripled his best toss. His glider sailed through the air 14.06 seconds, setting a new national airtime record and punching his ticket to the world championship.

While competitive paper airplane throwing was never on Cooper's bucket list, he's inadvertently been preparing for the big leagues for years.

"I've been throwing things since I was a kid and played baseball most of my life, so that definitely helped me. Because getting the plane as high as possible is the goal, so it can float down longer," he says. He's also been fascinated with flight for as long as he can remember.

"I've always been into aviation. I started by building model airplanes," says Cooper. By the time he was 11, he knew he wanted to be a pilot. But it wasn't until he came to Western—one of the top flight schools in the nation—and sat in the cockpit of a plane that he saw his dream within reach.

Landing a spot in the world championships unlocked another dream: seeing the world. Cooper had never been out of the country before scoring this all-expenses-paid trip to Austria. 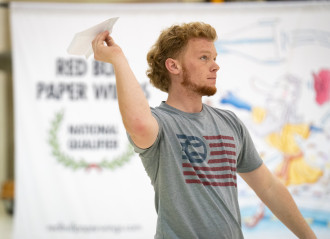 Cooper practices his throwing technique inside the hangar at Western's College of Aviation.

"I ended up staying an extra day on my own time so I could explore Salzburg and have some cool experiences there. I walked around the town for hours and went on a cable car up to the top of a nearby mountain and got to see the Alps and the whole city from there," he says. "It makes me excited for my future career when I get to fly overseas and stay for a night all the time."

Cooper didn't make it past the qualifying round in Salzburg—a passport mixup delayed his arrival and only left him with enough time for one practice throw after quickly crafting a plane—but he did have a chance to interact with all of the other contestants, who came from more than 40 countries, and learn about their cultures.

Memories manifested by a chance visit to the hangar at Western's College of Aviation.

"Now, whenever I see a competition like that, I'm never going to pass it up," he says. "It makes me want to start trying everything now because of where it got me the first time. Take more chances."

In fact, Cooper is already thinking about the next Paper Wings competition, which will happen in 2025. By then, he hopes he’ll be keeping commercial jets in the air for much longer than 14 seconds.

"Western is a world-class training environment," he says. "Western also has a lot of connections with basically every major airline you can think of. So getting a job right when I graduate and get my hours is going to be a lot easier."