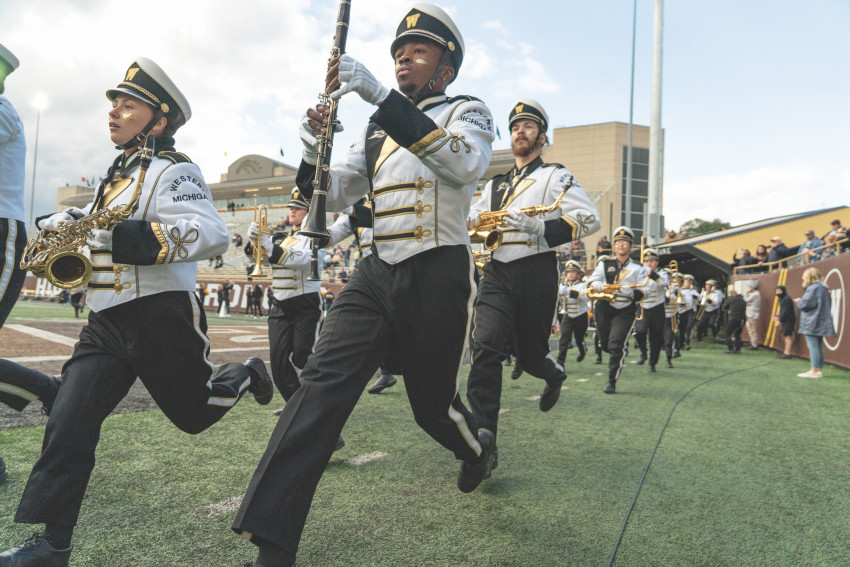 As her parents revealed long ago, Bronco Marching Band’s most recent drum major, Lauren Hill, wouldn't be here were it not for the band. By “here,” they mean their daughter owes her very existence to her parents meeting and falling in love as band members in the 1980s.

“That's the big joke … because dad was in finance and my mom was a communications major. So, they would have never crossed paths” on campus otherwise, says Hill, who followed in her father’s footsteps by playing the saxophone and serving as drum major.

James and Carrie Hill met on the band’s bus after performing at an away game.

"The rest, as they say, is history," muses Lauren, a music education major who graduated in April.

You could also say the Hills’ family origin story is consistent with the Bronco Band story as a whole. The love of music, the love of Broncos and the love of being a part of something bigger than any one individual have conspired to keep the band going almost every year since early in the 20th century.

While the College of Fine Arts celebrates 50 years of excellence in 2022, the Bronco Marching Band is still experiencing the afterglow of marking its own milestone anniversary and reflecting on what its own long history of excellence has engendered— personal stories like the Hills’ and countless institutional stories that exhibit the band’s instrumental role as the sound of Western.

In 2021, the Bronco Band hit the century mark—100 seasons playing the alma mater and the fight song in its various iterations, including a version of the fight song popularly known in the 1920s as "Hail, Hail for Western Normal School." Over its long tenure, the band has helped athletes and fans alike celebrate victories with rousing renditions of popular songs, and it has brought Broncos together across generations. 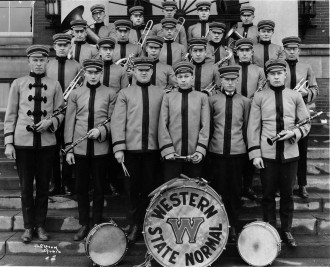 “We are sort of the curators of traditions on campus because so many of our (collegiate) customs are based on musical concepts,” says Dr. Trey Harris, director of the Bronco Marching Band.

Though the band was founded more than 100 years ago, it was on hiatus for some periods, including during world wars and the most recent global calamity, the COVID-19 pandemic. So, after accounting for pauses, 2021 is recognized as culminating the band’s first 100-season run.

At inception, the band was an all-male group with fewer than two dozen members. Over time, it has developed into a perennial powerhouse that is today typically 250 to 300 members strong, with all genders filling out the ranks.

Jenny Rogers, a music education major and senior assistant for the band until her April graduation, says the weight of the band’s history and its role as the University’s keeper of tradition are palpable.

“A really good example is our homecoming. We have an alumni band that comes back for that. There are people who marched in the ‘70s and ‘80s that show up. … We still have the same traditions,” says the clarinet player. “This past year, we had 300 show up for the 100th season. It was an amazing experience.”

Celebrating the band’s centennial and its evolution over time have imparted even more meaning to membership, Hill says. She learned that in the 1940s, for example, with so many male students engaged in the war effort, women were invited to join what was then Western’s Military Marching Band. It was the first time women marched in the group, according to band history.

“It’s been cool to see,” Hill says. “There’s quite a bit documented in terms of pictures or just information about that time, when women were allowed to be in the Bronco Band and the first female drum majors. Today, I’m representing the band as a whole, but I’m also a reflection that women could finally be a part of the band. We want to continue reflecting diversity.” 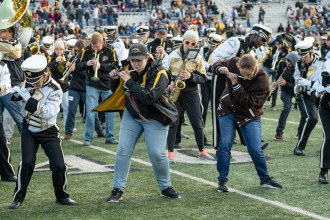 Alumni play with the Bronco Marching Band during WMU Homecoming 2021.

What may be surprising is that the band is mostly made up of non-music majors; roughly 80 to 85% of students in the marching band are pursuing disciplines other than music. Most, if not all members, previously played in high school marching bands. They join the Bronco Band to continue pursuing their passion for musical performance, even if it's not their major.

For many members, involvement creates community and a sense of belonging, contributing to Western’s small-campus feel. And passion and a commitment to purpose are musts. Band is a one credit course at Western, but members practice together 100 minutes a day, five days a week.

“The amount of time and the commitment that these students put forth to effectively serve their University is astounding,” Harris says.

In any given year, the band performs six to seven different full-length halftime shows. In recent years, that repertoire has included a show paying homage to the rock band Queen and another to the “queens” of Michigan, Aretha Franklin and Madonna among them. At the October 2021 Homecoming game celebrating the band's centenary, the show covered the evolution of Western fight songs over the decades.

Now with the band’s first 100 seasons in the history book, Harris says he and the band's student leaders are thinking about what it looks like to move into what he's calling the second century of seasons.

"We're exploring how to carry forward the traditions from the last 100 seasons into the next 100 seasons. We have a foundation that was put in place in the 20th century and early 21st century. We want to make sure we move forward in the best way possible."

The Bronco Band’s second century of seasons kicks off for fans later this year. ■