A catalyst for environmental justice

Air pollution, higher temperatures, water contamination—all are being exacerbated by climate change, and they're impacting vulnerable and historically marginalized communities at higher rates than privileged populations.

Environmental justice advocates say it's time to acknowledge the lasting effects of historically racist policies. For example, a recent study published in the journal Environmental Science and Technology Letters found Black and Latinx Americans live with more smog and air particulates from transportation and industrial pollutants than their white counterparts. It ties the pollution to communities that were redlined—a now illegal practice adopted in the 1930s that refused to insure mortgages in and near predominantly Black neighborhoods.

The report hits close to home for Deirdre Courtney, a part-time instructor and Ph.D. candidate in Western's Institute for Intercultural and Anthropological Studies. 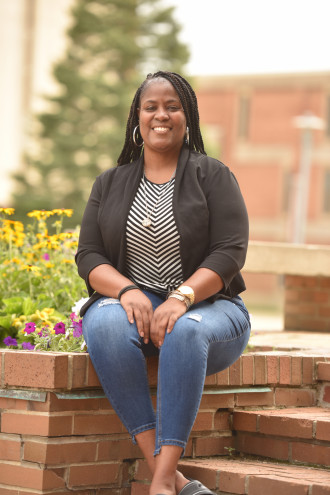 "If I think back to my early childhood when even my parents would engage me in certain issues," she remembers, "they would say, 'We're a part of a community that may be impacted negatively by pollution' and those types of things. And although I didn't have the language or the understanding in terms of ways that I could probably help my community in ways I do now, it was very much part of my life."

She is currently in the design phase of the project, connecting with educators who think their students would benefit from the curriculum. Courtney will then work with them to tailor lesson plans that will be most impactful for each class. The lesson plans she develops will be shared in Michigan and throughout the Midwest.

Courtney also created a course at Western—the first of its kind—called African Americans and Climate Change, which examines the impacts of the world's changing climate on marginalized populations and delves into the environmental justice movement.

She's hoping to inspire students to learn more and put that knowledge to work as initiatives to rectify historic inequities become more widespread.

"It's important for me that we not only have diverse thoughts and diverse ideas—this is the only way that we're going to solve these problems—but it's even more important that we have diverse individuals at the table," Courtney says. "I come from a minority group, a marginalized group, and unless our voices are at the table, we're not being heard. Our contributions aren't there, and I don't feel that the work can be advanced properly."

The Biden administration acknowledged the adverse impacts of aging infrastructure and climate change on the nation's most vulnerable populations, creating the White House Environmental Justice Advisory Council. It is coordinating the Justice40 Initiative, which promises to dedicate at least 40% of federal climate investments to communities in need. However, the council has taken issue with the fact race will not be considered as a factor.

"While working toward environmental justice includes some low-income communities, the disproportionate number of people of color who live in poverty makes race essential to understanding and addressing the problem," Courtney says, pointing out the importance of examining both historical and current impacts of racism to promote a more just future.

"As an environmental justice advocate and social scientist, I recognize the need to center the voices of those who are most impacted by this crisis. We must stand for the human rights of all people equally." ■