KALAMAZOO, Mich.—A rising star with the gymnastics world at her fingertips, Payton Murphy's decorated collegiate gymnastics career nearly ended before it took off. The standout Western Michigan University student-athlete suffered a severe neck fracture just days after her first meet as a Bronco.

Instead of being overcome by fear, her passion for the sport fueled a recovery that was nothing short of miraculous, catapulting her back onto the mat. Better than ever just a year later, she earned a spot as one of three finalists for the 2022 College Women's Sports Awards’ (CWSA) Honda Inspiration Award.

"There were many strong nominations for the 2022 Inspiration Award, and each had a truly inspiring story," says Judy Sweet, CWSA board member and chair of the Inspiration Award committee. "The three finalists demonstrated strength, resiliency, determination and success in overcoming significant health challenges and ongoing adversities."

In the end, another finalist was selected as the Inspiration Award winner, but Murphy says the title isn't what's important—it's the opportunity to help others.

"I'm looking to inspire gymnasts—more than gymnasts, any other athletes—who go through an injury within their sport and have to come back and deal with the fear they might have … to get through it and be better than they were before," she says. 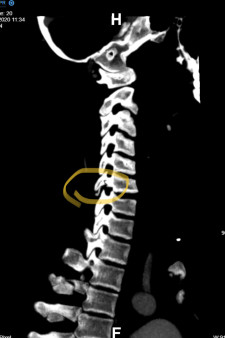 An X-ray shows the severe fracture in Murphy's neck.

Murphy, the 2021 Mid-American Conference (MAC) Gymnast of the Year, remembers the moment her career flashed before her eyes. It was January 2020, just two days after she completed her first collegiate gymnastics meet at Western where she'd won the all-around title and helped the Broncos beat Michigan State.

"I was doing a dismount; it was my last turn. I remember telling my coach I wasn't going to do anymore, and I let go a little bit too early," she says. "I landed on the back of my neck … and heard a crunch."

Paramedics arrived and rushed her to the hospital. In the flurry of scans and X-rays, a conversation with a medical student is burned into her mind.

"He was behind me stabilizing my head, and he was asking me questions about gymnastics, trying to calm me down," she says. He asked her how long she'd been doing gymnastics—she started when she was 5—and she told him about her winning score at her first meet at Western. "He said, 'Oh, you must be pretty good.' And I just remember breaking down even more because I thought, 'I don't know what's going to happen now.'"

Murphy, a nursing major, says the terminology and processes she'd begun to learn in classes at Western helped calm her nerves a bit, as she had a better understanding of the tests she was undergoing and the care she received.

Bolstered by the support of her teammates, coaches, trainers and family, Murphy resolved to return to the gym. But first, she headed home to Carol Stream, Illinois, for a few weeks to let her body heal.

"I had to sleep upright in a recliner for probably two weeks, then I graduated to a wedge I could put on my bed. I had to shower with my neck brace on," Murphy says, laughing about the child-sized brace she was given because the adult brace was too large. Once she felt comfortable walking around, she was able to join her team at a meet in Northern Illinois. Then, she headed back to campus.

Murphy wore a neck brace for several months as she recovered.

"I just had to watch the team from the sidelines at practice and at the meets, cheer them on," she says. "During those three months (of the season I couldn't participate in), I was seeing girls win things that I wanted to win and seeing girls work with the team I wanted to work with. So I think it was all building up during those three months of competition, and I just exploded when I got my neck brace off and I was able to actually practice."

Murphy practiced at her home gym in Illinois in the off-season, which allowed her to tackle skills at her own pace.

"I would always send (my team) videos, and they were awesome with their responses," she remembers. "The coaches and the girls were all celebrating, and it just made me feel really good that I was doing the right thing by coming back."

One thing that didn't come back when Murphy finally got the chance to compete with the Broncos again in 2021? Her ill-fated dismount.

"When I came back to Western, I learned a new dismount because I wasn't doing that one again," she says. "I boxed that old dismount up and said, 'That was bad, but the rest of the bars isn't so scary.' I just had to take it one day at a time … and be patient."

Murphy had a banner year in 2021, competing in 10 meets and earning season-high scores in vault, beam, floor and all-around, which also earned her the title of 2021 MAC Gymnast of the Year. She accomplished all of that while continuing her pursuit of a bachelor's degree in nursing—something she says she wouldn't have been able to do elsewhere.

"A lot of schools when I was getting recruited told me I couldn't do nursing if I wanted to do gymnastics," she says. The ability to thrive in both her passions is what helped her choose Western. "If I have to go to a clinical or something, (my coaches and trainers) will come in a few hours after the team practice just with me, so they work around my schedule nicely. It's a little stressful trying to go from seven-hour clinicals in the morning and then have to go to a three-hour practice … but I think it's all worth it." 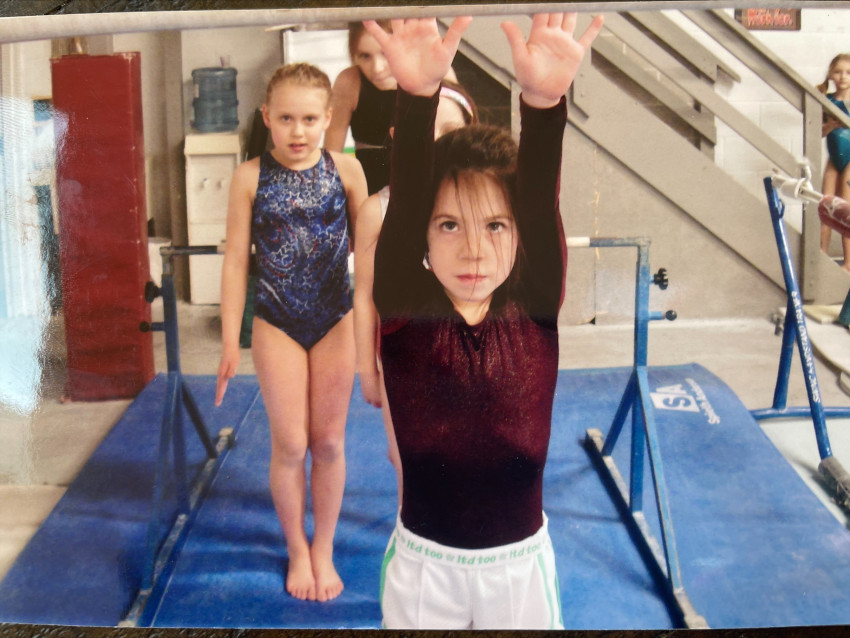 Gymnastics has been a life-long love for Murphy, pictured here practicing as a child.