VILSECK, Germany—Coming to the United States to study will be a cultural shock for Molly Cochran.

“I’m an American citizen, but I was born in Sasebo, Japan,” she says. “There was a military base there, and both of my parents teach in military schools. I’ve pretty much lived my whole life on military bases.”

While she has visited the United States, Cochran has not yet lived on American soil. She currently lives on a military base in Vilseck, Germany. Her next home base, however, will be Western Michigan University.

“I’m a bit nervous about such a big change,” Cochran admits, “but excited. … I had applied to three universities—Western, Michigan State and a school in Tennessee, where I would be near my aunt, but I liked this campus best. Michigan State was so, so big; I’m not used to that. My high school on a military base only had 370 students. Western felt more personalized, and they accepted my credits.”

During a campus visit, she connected with Western’s ROTC program—a familiar fit with her family’s military lifestyle. The Army ROTC program is an elective, with no obligation to join the U.S. Army, although Cochran plans to major in nursing and become an Army nurse.

“I’ve always enjoyed my biology classes, and I have a strong Christian faith. So I love caring for people,” Cochran said. “My schoolmates gave me a nickname of ‘Mom’ because I can be such a caretaker. Military kids can have a lot of stress, so I like to help with that. I decided I wanted to be an Army nurse sometime in sixth or seventh grade.”

Cadets enrolled in the ROTC program at Western attend classes and leadership labs with topics covering ethics and values, leadership styles, orders preparation, map reading, Army structure and roles and training management. They also participate in physical training at minimum three days a week and a field-training exercise each semester. 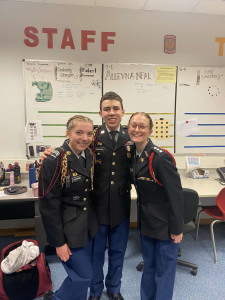 Cochran will have an opportunity to participate in these opportunities thanks to financial assistance from the ROTC as well as Western’s Medallion Scholarship. As the University’s most prestigious merit-based scholarship for first-year students, it covers tuition and fees for four years, provides an on-campus housing scholarship for four years and helps fund either study abroad or research. To earn the scholarship, Cochran had to demonstrate outstanding academic performance and leadership skills during high school along with a commitment to better the world around her.

Cochran and her fellow 2022 Medallion Scholars will be students of the Lee Honors College, where they participate in long-term group service projects that are the cornerstone of their contributions to the University and the greater community. Current projects include working with refugee youth at Bethany Christian Services; bringing therapy dogs to campus for students; working with Clean Water for the World to raise awareness and money to install water filters across the world; and leading sustainability and climate change initiatives on campus.

As a nursing student, Cochran will dedicate her time to learning how to help patients through clinical laboratories, simulations and instruction. But she has some plans to have fun too.

“I would also like to explore getting involved with band if my schedule allows,” Cochran added. “I’ve played the flute and piccolo since sixth grade. And I hope to join the Cru club, the campus community for Christ.”

Even though Cochran has lived on the military base in Germany since she was 9 years old, she wishes to improve her German language skills with a minor.

“I can speak a little Japanese and I can speak German, but living on base means mostly being around other American kids. So I’m not as strong in German as I would like to be,” she says. As time allows, Cochran also plans to travel the country, getting to know the land of her ancestry if not her birth.

She says her family is almost as excited about her move to the states as she is. Her mother is already enrolled as an online student at Western, pursuing a master’s to teach English as a second language.

“Both of my parents are from Detroit, both graduates from Central Michigan University, so they are really excited about my living in Michigan,” Cochran says. “I’m going to miss them and my brother and sister, but I feel good about this move. Everyone at Western has been so kind, so nice.”