Betting on an adventure: Bryan Cranston brings story of alumnus who beat the lottery to the big screen

A retiree in a sleepy town stumbles on a lottery loophole, finding a way to take luck out of the equation and make millions. The Hollywood script practically wrote itself and had actor Bryan Cranston chomping at the bit to play the part. It's a good thing—writing isn't really Jerry Selbee's thing.

"My spelling is terrible—absolutely terrible!" It posed some challenges in more writing-intensive, graduate-level courses he took at Western in the 1970s. "(One) instructor said, 'You know, you're the worst speller I have ever seen. How did you ever get into graduate school?'"

The truth is: He almost didn't. But what he lacks in grammar sense, he more than makes up for in mathematical skills. In fact, Selbee's understanding of probability is likely the only reason he made it into Western's program, having flunked the required English proficiency test once.

"The second time I took it, I knew mathematically that if you don't know a question and you're given four choices—A, B, C, D—pick one of those letters and always answer your questions you don't know with that same letter. I picked B. So there were five or six questions on the test I didn't know … and I passed the test on the exact minimum."

Selbee, BBA '66, MBA '77, always had a knack for numbers—he tested at a college level in math when he was in middle school—but if you'd asked him while he was taking night classes at Western the exact probability his life would be made into a major movie, his calculations likely would have landed near zero. He wasn't trying to strike it rich or become famous, he just wanted to get off the production line.

"Once I got my bachelor's degree, they made me a supervisor," says Selbee, who started working at the Kellogg's factory in Battle Creek his senior year of high school—the same year he married his sweetheart, Marge. They enjoyed a modest small-town life, raising six children while Jerry Selbee moved from Kellogg's to Upjohn and Post Cereal before the couple bought a convenience store to run in Evart, Michigan, where he would eventually retire.

That's when things got interesting.

Selbee enjoys sitting on the front porch swing at his home in Evart, Michigan—the same house he and his wife have lived in since before they hit it big.

One day in 2003, while he was at his old convenience store chatting up the new owner, Selbee happened to pick up a brochure for a lottery game called Winfall. The progressive jackpot game would roll winnings down to lower prize levels once the jackpot hit $5 million.

"It was a unique game that I was not familiar with, and I looked at the structure of the game and decided within three minutes that the game could be profitable if no one won the jackpot. So the next step was to determine what the probability was of somebody winning the jackpot," Selbee says.

This is where some of his Bronco business skills were put to the test. He quickly calculated the probability of no one winning the top prize at about 85%; a risk and reward analysis helped him determine the minimum return on investment he would need was 18%.

"I knew that the game would work as long as the numbers remained reasonably constant. And that's what happened," he says.

Never a gambling man, Selbee spent some time convincing himself to test his theory. He remembers going on an ice fishing trip with his son and son-in-law shortly after making the discovery.

"I had already determined this game could be successful, but I couldn't believe it. It was too easy," he remembers. "So I tried to talk to Matt and Dave about that, and they said they didn't want to hear anything about the lottery. 'Forget it.' So we spent three days out there and all I could do is think about the fact that this had to work."

When he got back to Evart, he couldn't stand it any longer and decided to play $2,200 when the next rolldown hit.
He lost $50. 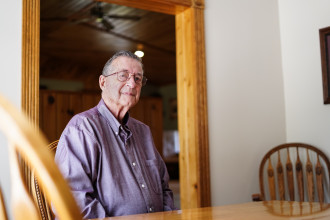 "I knew that the game would work as long as the numbers remained reasonably constant. And that's what happened," Selbee says.

"I should have gotten two four-number winners, mathematically. I got one," he remembers. "So I knew I hadn't played enough to compensate for the variance."

While their strategy wasn't illegal, Jerry Selbee decided to create the corporation GS Investment Strategies to ensure everything was above board. Then he invited his friends and neighbors to join in and buy shares to increase the volume and in turn increase the profits.

"One of our members, the father of one of our sons-in-law, had to change CPAs at one point," Selbee says. "His new CPA went through all of his stuff and called him and said, 'I need to meet with you guys.' So they went to the office and he said, 'I gotta tell you, I'm a little concerned. It looks like you have a gambling problem!' And he said, 'No, no, this is the best thing since frosting on a cake!'"

The group played 12 times in Michigan before the state shut down Winfall due to lack of sales in 2005. But a relative quickly keyed Selbee in on a similar game, Cash WinFall, in Massachusetts with even better odds—a more than 92% chance no one would hit the jackpot. So he and Marge took their operation on the road, driving 13 hours every five or six weeks to a convenience store in Sunderland.

At the height of their playing, they were betting more than half a million dollars at a time—Jerry and Marge watched machines print tickets for 12 hours a day each—then spending a week or two in a motel going through all the tickets by hand. To many, it would have been tedious work. But the Selbees saw it as an adventure and a way to enjoy their time together.

"It was the sense of accomplishment of doing something different than retired life," he says. "It was fun! And to me personally, it was satisfying knowing what I thought would work actually did."

They didn't blow their winnings on anything lavish, buying a truck and a camper to tour some national parks and helping some of their grandchildren pay for college.

But the fun couldn't last forever. A reporter from the Boston Globe noticed the Selbees and a group of college kids from MIT were consistently winning big; she published two stories that led to a state investigation. It determined the Selbees didn't do anything illegal, but the state eventually shut down the game once the cat was out of the bag on the loophole.

The Selbees and their friends made their last play in 2012. They never won a jackpot, but they didn't make chump change either.

All told, in the nine years they played the lottery in both states, the Selbees and their two dozen or so partners in GS Investment Strategies won more than $27 million. 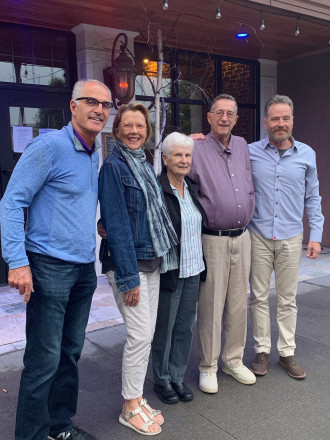 Director David Frankel and actors Bryan Cranston and Annette Bening spent several days in Evart getting to know the Selbees.

As they say, when one adventure ends another begins. And so it went for the Selbees, who were thrust into the national spotlight following a 2018 Huffington Post article by Jason Fagone. He spent a couple of years talking with Jerry over cups of coffee and Sudoku during visits to Evart. A crew from "60 Minutes" quickly followed and, before they knew it, the Selbees were fielding calls from more than a dozen producers wanting to make their story into a movie.

"It was quite an experience. I don't know how to describe it: flattering and awe-striking at the same time," he says. "I knew all along that the story could make a movie, but I didn't know that it actually would."

Soon Selbee would get the news Hollywood heavyweights Bryan Cranston and Annette Bening would be playing him and his wife on the big screen.

"I felt it was a breath of fresh air kind of story," Cranston told Radio Times. "Over the 90 minutes, it would be a feel-good movie—and coming out of COVID and the lockdown, this is the first project I wanted to do. And it was good for me to do it, because I felt a sense of community as well."

Selbee wasn't very familiar with Cranston or Bening—he's "not a moviegoer"—but he got to know them both pretty well. The stars each spent several days in Evart getting to know them and the town, talking on the front porch swing and eating at local dives.

"(Cranston) must have been watching me pretty closely, because he picked up on some of my habits," Selbee says. Cranston even walked into the local barbershop and asked for a "Jerry Selbee haircut. … That's why his hair in the movie looks exactly like mine. And he copied my glasses. … Our kids saw and said, 'Oh my gosh, he looks almost just like you!' after seeing the movie.”

Selbee admits he was anxious to see how Hollywood would spin the story—the whole town was. But they were all pleased with the outcome. The movie took a couple of liberties—it set up a rivalry between the Selbees and the college students and had the winnings save the town—but it captured the heart of their story.

"It's kind of shocking," Selbee says. "Certain sections of the movie make me quite
emotional … because of my memories."

In June, Paramount flew Jerry and Marge to New York to walk the red carpet at the Tribeca Film Festival and get the movie
star treatment.

"Every 5 feet Marge and I would have to stop and get our pictures taken and give an interview."

Back in Evart, population 1,700—a small fraction of the 150,000 people that attended the festival in New York—the Selbees are happy to be back to their quiet life, enjoying their family and occasionally reminiscing about their lottery adventure.

"Life goes on. And if you see something that can be advantageous, either to yourself or others, it's a good thing to be able to do it," Selbee says. And if he happens to stumble upon another lottery loophole while doing light reading at the convenience store?  "Absolutely, I would do it again!" ■ 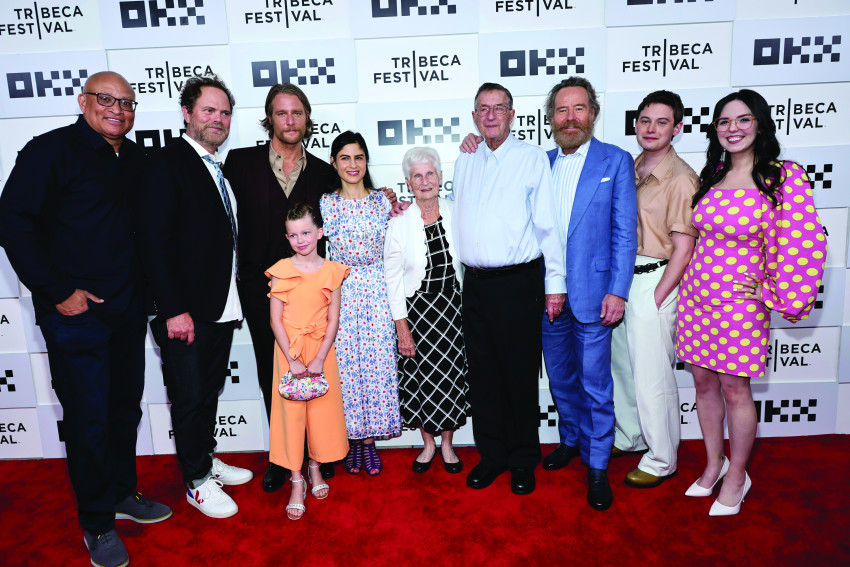