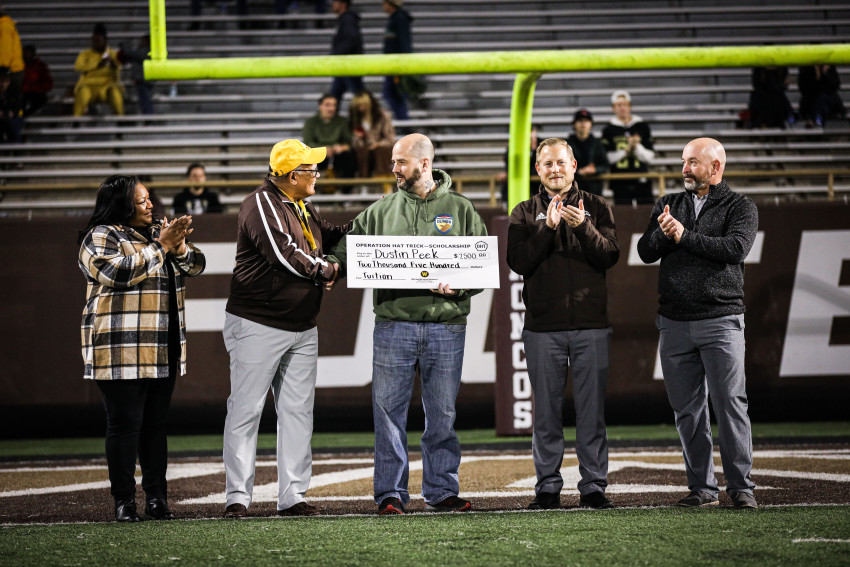 KALAMAZOO, Mich.—Building on its tradition of supporting military-connected students, Western Michigan University is celebrating Veterans Day with the awarding of a scholarship as well as a new program for students transitioning from military service to civilian life.

The new Military Ally program will create a safe space for students through training for University employees. Faculty, staff and administrators will learn how to validate issues and listen with a sympathetic ear so they can communicate with students who are currently serving or have served as well as their dependents to help connect them with the appropriate resources on and off campus. The program includes an online class hosted through Elearning and a 90-minute classroom session, both of which are required for certification.

“The purpose of the program is to support a culture of diversity, equity and inclusion by making several safe spaces and mentors for military-connected students across Western,” says Kenneth Franks, military advocate for the Office of Military and Veterans Affairs. “It’s not intended to make them a subject matter expert in all things military, but to provide the information and resources needed to have an intelligent conversation with military-connected students, point them in the right direction of resources and help assist with the transition from military service back into civilian life.”

One student working through this process is Senior Airman Dustin Peek, the recipient of the University’s Operation Hat Trick Military Scholarship.

“I am really grateful to be picked, and it is very humbling,” the veteran from Whitehall, Michigan, says.

Born on a U.S. Air Force base and having family in the military, Peek says he was around planes most of his life. He served in the Air Force from 2014-18, working on assignments ranging from explosive ordinance disposal training at Sheppard Air Force Base in Wichita Falls, Texas, to contract support of overseas operations from Moody Air Force Base in Valdosta, Georgia.

Now as he transitions back to civilian life and into his new Bronco life, he plans to study aerospace engineering beginning this spring.

“Western is a good fit for me,” he says, commenting on the personal feel WMU offers as well as its robust academic offerings. “I’m hoping to stay somewhat close to aircraft and ultimately work for a company that contracts with the military.”

Western is consistently ranked as a “military friendly” university and “Best for Vets" by Military Times magazine. The University continues to broaden services for veterans, such as the VetSuccess on Campus program, which is the first Veterans Affairs student success program of its kind in Michigan. As an additional benefit, the University recognizes all veterans and their families as Michigan residents with regard to tuition costs and fees.

Operation Hat Trick (OHT) is a nonprofit organization that generates awareness and support for the recovery of service members and veterans impacted by both visible and invisible war wounds. It does so through the sale of branded merchandise and products, donating the proceeds to organizations related to that mission. WMU is the first university the organization chose to offer a dedicated scholarship, funded directly by proceeds from OHT-licensed Bronco gear purchased through the WMU Bookstore.

Since 2014, Operation Hat Trick has donated more than $2.3 million to fill critical gaps in care for military and veterans.