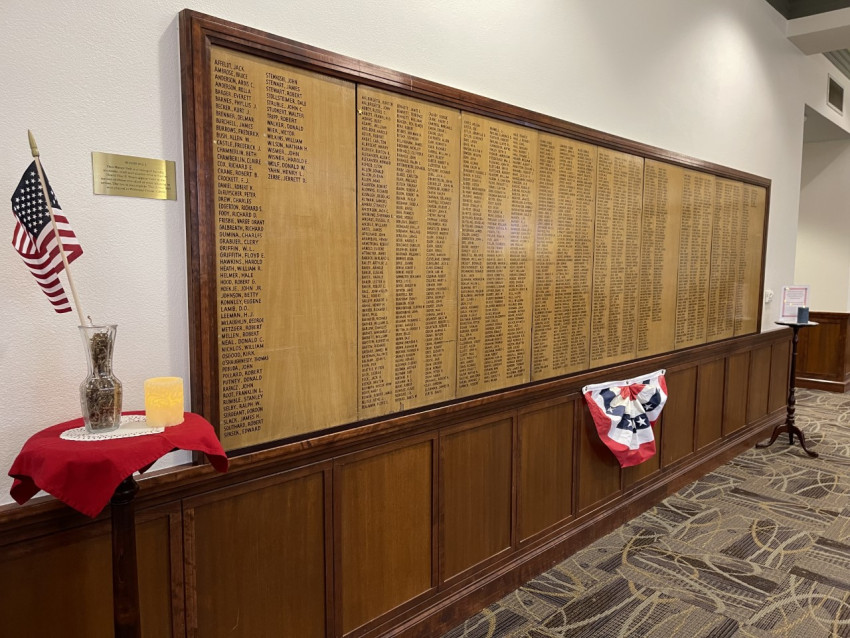 A memorial in Walwood Hall honors more than 1,400 Western students, faculty, staff and alumni who served in World War II.

KALAMAZOO, Mich.—United States service members put their lives on the line for their country every day. Western Michigan University's Graduate College took time to honor their service on Veterans Day while also paying homage to Broncos who made the ultimate sacrifice. 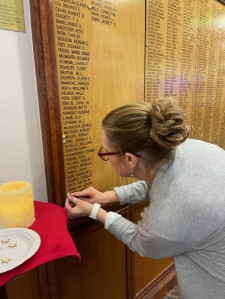 Paige Warner adds a wooden star to the memorial wall.

"It's about respect," says Paige Warner, executive assistant in the Graduate College. She spearheaded the effort to spruce up a memorial hanging in the lobby of Walwood Hall that recognizes approximately 1,445 students, faculty, staff and alumni who served in World War II. "This is a passion project for me, because my father is a veteran—he served in Vietnam—and I saw the impact that had on him."

The memorial had fallen into disrepair until recently when Matt Lovett, a carpenter in facilities management, crafted new trim to better hold the panels in place. Warner then ordered wooden stars to replace gold stickers that had marked Broncos killed or missing in action during the war.

"This project meant a lot to me," Warner says. She invited veterans and current service members in the Western community to do the honors of adding the new stars on Nov. 11. "It just seemed fitting."

A physician assistant graduate student who served in the Army Rangers and is currently part of the National Guard stopped in twice to replace several stars. He asked to remain anonymous but emphasizes the importance of honoring those who came before him.

Remy James, who will graduate with her master's degree in counselor education from Western in December, also took part in the event. A former fire direction control specialist in the Army and current human resources officer in the National Guard, she hopes to one day serve as a clinical psychologist to service members and veterans.

"I wanted to replace stars on the Walwood wall out of respect for those that served and never came home. Veterans Day for me is a day to truly consider the ills of war, those that have experienced it firsthand, and the reality of the commitment I have made." 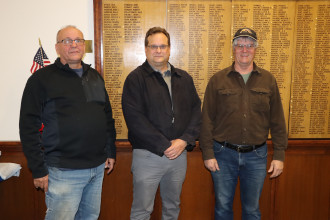 (left to right) Tim Carr, Dr. Steven Carr and Rick Carr, B.S.'83, stand next to the memorial wall where two of their family members are listed.

Dr. Steven Carr, professor and chair of the Department of Computer Science, noticed the memorial wall one day last year while walking to his office in Walwood Hall when he served as interim vice president for research and innovation. He started reading the names and realized two of his uncles, who served in the Army Air Corps, were represented.

"Kenneth Carr was infantry and Richard Carr was a clerk," he says. "Kenneth was on a ship called the Leopoldville, and on Christmas Eve 1944, they were crossing the English Channel and got torpedoed."

More than 700 of the 2,000 American soldiers on the ship, which had been deployed to fight in the Battle of the Bulge, died in the tragedy. Kenneth Carr, miraculously, was not one of them.

"He remembers being knocked out of his bunk and the sergeant saying, 'Get your life jackets.' Those jackets ended up being a commodity because the ship was sinking … and he slipped off the ship, down the hull and swam over to a fishing boat. He told me there were 200 guys trying to fight their way onto the boat, so he swam around to the other side and was the only one there and they pulled him in," says alumnus Rick Carr, Kenneth's son, who graduated from Western with a degree in aviation technology and management in 1983. 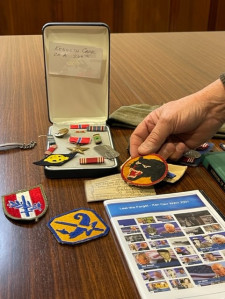 He appreciates that his family's legacy is being honored on the memorial wall.

"When I graduated high school, the military was really looked down upon. It's great to give them the respect they deserve. These were just the kids next door that served. I'm really glad the University has taken the time to recognize their contribution and their sacrifice," he says.

"It's pretty impressive because of the sacrifice that all of these people made to keep this country free," adds Steven Carr, whose father was a weather forecaster for the Air Force in the Korean War. His son-in-law also serves as an Army Ranger. "It's a terrible sacrifice because a lot of them gave their lives. You can see that in all the stars on the wall."