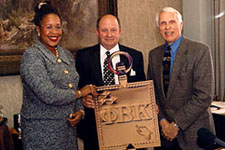 Phi Beta Kappa is the nation's oldest and most respected undergraduate honors organization. Western Michigan University received the distinction of sheltering a Phi Beta Kappa chapter in 1997. The Theta of Michigan Chapter of Phi Beta Kappa was installed on Feb. 22, 1998.

The Phi Beta Kappa Society was founded on Dec. 5, 1776, at the College of William and Mary in Williamsburg, Va., making it the oldest honor society for the liberal arts and sciences. Since its inception it has inducted more than 500,000 collegians, including 17 U.S. presidents, 40 U.S. Supreme Court justices and 140 Nobel laureates.

Western Michigan University carries on this time-honored Phi Beta Kappa tradition by recognizing the most accomplished students in the liberal arts programs. Phi Beta Kappa (ΦΒΚ) stands for Φιλοσοφία Βίου Κυβερνήτης or philosophia biou kybernētēs, meaning "love of learning is the guide of life." WMU fosters this love of learning through its many programs, including the illustrious Phi Beta Kappa.