On May 27, 1902, Governor Aaron T. Bliss signed the Michigan Legislature bill authorizing Michigan’s fourth Normal School. The location of the new school was awarded to Kalamazoo, Michigan, in a vote by the state board of education on August 28, 1903. The original tract of land on which the Western State Normal School was built was donated by the city of Kalamazoo. It consisted of 20 acres on Prospect Hill, overlooking the city, accessible either by walking up from Davis Street on the east or via Asylum Road (now Oakland Drive) on the west. 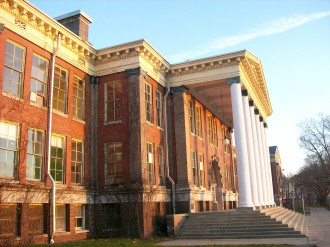 Battle Creek architect E. W. Arnold and John C. Olmstead of the renowned Olmstead Brothers landscape firm participated in the site selection. Later, in 1904, John C. Olmstead devised a landscape and planting plan for the new campus. The plan was well received, but financial considerations prevented it from being implemented. The first building, the Administration Building, was completed and occupied on September 1, 1905, although classes had actually started in temporary quarters in 1904. Dwight B. Waldo was selected as principal (later changed to president).

Initial enrollment was 107 students. By 1909, two wings had been added to the first building: the Training School and the gymnasium. Together these became known as East Hall. Its three columned porticos and lit cupola could be seen from afar, and inspired Will Rogers to dub Prospect Hill “the Acropolis of Kalamazoo County”. East Hall was listed with the National Register of Historic Places in 1978.

From the beginning, access to the Prospect Hill site was an issue because of the steep grade elevating it above the city. In 1907, funds were appropriated for an electric railway. “Normal’s Railroad”, or the "Western Trolley”, carried people up and down the hill from its base on Davis Street to the summit at the grassy lawn between East and North Halls.

The trolley operated until 1949, by which time the campus was moving in new directions and the automobile was making inroads as the preferred method of travel. 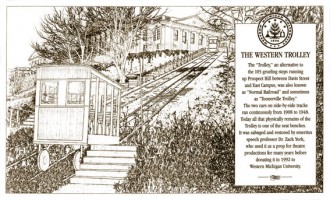 By the early 1940s both the school and its facilities had expanded. The Western State Normal School became the Western State Teachers College in 1927, and then the Western Michigan College of Education, in 1941. Paul V. Sangren became President in 1936.

The Western campus grew from 20 acres to nearly 60, from one building to over a dozen, including athletic facilities and residence halls. It comprised roughly all the land bounded by Prospect Hill (now called Normal Hill) on the east, the Michigan Central Railroad in the valley on the northwest, and Austin Street and the State Psychiatric Hospital to the south. Enrollment in 1940-41 was 2,620.

Known today as East Campus, or Historic East Campus, it was registered with the National Register of Historic Sites in 1990 as the Western State Normal School Historic District.

In 1944 Western received a gift from Mrs. Ann Carstens Kanley towards the purchase of land to the west of the railroad tracks. Together with funds appropriated by the Michigan Legislature and a donation from the Upjohn Foundation, Western purchased a total of 155 acres of land and several existing buildings. This roughly formed a triangular area bounded by US-12 (now Stadium Drive) and the railroad tracks, West Michigan Avenue, and a north-south line to the east of where Miller Auditorium now sits. 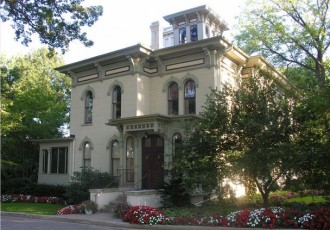 Western immediately made use of this property by moving the President into The Oaklands, one of the existing residences that had been purchased. Many “temporary” structures were built, mostly as housing for veterans and their families but also some classroom facilities. Among the first permanent facilities built on the new “West Campus” were the Burnham Residence Halls in 1948, followed by the first classroom building, McCracken Hall, in 1949, Kanley Memorial Chapel in 1951, and Seibert Administration Building in 1952.

The new West Campus rapidly became equal in importance to the original East Campus. While physically separated by U.S. 12 and the railroad tracks, the entire campus functioned as a whole. Records show that, between 1950 and 1959, 50 percent of all undergraduates owned a car and 50 percent lived on campus.

Enrollment, which had declined during the war, increased in 1946-47 to 4,134, including 112 graduate students. Gradual but steady growth was experienced over the next decade. In 1957, when legislature approved a change of name and status to Western Michigan University, enrollment was nearly 6,000 students.

During the late 1950s and throughout the 1960s the University experienced drastic increases in enrollment. In 1960, almost 10,000 students were enrolled; by 1970 there were nearly 22,000 students. Complicating the growth were the increased use of cars. In the 1960s, 63 percent of undergraduates owned cars and 61 percent commuted to campus.

In an effort to meet the demands of growth, by 1964 the University had acquired an additional 179 acres. There was expansion north of West Michigan Avenue to build the Bernhard Center, Sangren and Rood Halls and Everett Tower. The University also acquired what is known as Goldsworth Valley and the land for the Goldsworth Valley Residence Halls. It expanded west to Knollwood Avenue and reached south to build Lawson Ice Arena and Gabel Natatorium and the Stadium Drive Apartments. 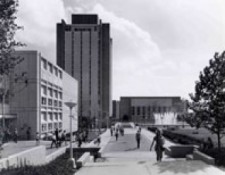 Despite a very ambitious construction schedule (which included Wood, Kohrman, Brown and Rood Halls, Sprau Tower, Waldo Library and a parking structure), it was perceived that the Physical Plant of the University did not adequately handle this level of enrollment. Congestion and pedestrian/vehicle conflicts on and around West Michigan Avenue were a significant problem.

In 1970 a "Campus Development Plan" was crafted to provide a flexible but organized framework for the expansion of the physical facilities at the University. The philosophy and goals put forth reflected the criteria developed by the President’s Faculty Advisory Committee on Campus Planning, and by its successor, the Campus Planning Council of the Faculty Senate. President James W. Miller and the Board of Trustees endorsed the plan.

The key objective of the development plan was to create a pedestrian, or "urban" campus.

This was to be achieved by closing off West Michigan Avenue where it bisected the campus, and by extending Howard Street on a northwest arc from Stadium Drive to West Main Street, creating a new cross-town artery. To achieve its desired physical growth, the University would then systematically acquire the residential properties east of the new Howard Street and contiguous with the West Campus.

The 1970 Campus Development Plan anticipated that academic programs would require more than double the existing building space, from about 1,500,000 to over 3,000,000 square feet, and that parking for faculty, staff, and commuters would require about 5,200 parking spaces. The corollary to the creation of an academic core on West Campus was the intention of moving all academic programs out of East Campus buildings. The only defined uses for East Campus in the 1970 Plan were for maintenance and athletics facilities along Stadium Drive and for “park areas” along Davis Street.