By the mid-1990s, many but not all of the goals and objectives of the 1970 Campus Development Plan had been realized. Closing West Michigan Avenue to eliminate through traffic and limit pedestrian-vehicle conflicts was a critical and timely choice. While enrollment stayed at the predicted 22,000 for most of the 1970s and then gradually increased to 29,000 in the 1990s, automobile use was significantly more than expected. In 1999, over 90 percent of students owned a car, while only 21 percent lived on campus. Vehicle congestion could be intense, and non-resident campus parking totaled nearly 10,000 spaces, with an additional 2,000 spaces dedicated to residents.

Parking and vehicular access are not entirely removed from the center of West Campus, but much of the former West Michigan Avenue and VandeGiessen Road have become landscaped pedestrian ways. Traffic is directed around the campus perimeter, with access to parking, building drop-offs and major service areas. Commuter parking, principally surface lots, is concentrated on the western side of campus.

The majority of properties east of Howard Street were acquired by the University, as was some Kalamazoo State Hospital property south of Oliver Street.

In 1974, President John T. Bernhard was moved into a newly purchased residence on Short Road near Wheaton Avenue. As the need for campus housing decreased, surplus residences halls were converted to office and research space. New construction included the Dalton Center, Schneider Hall and the University Computing Center.

There were several major renovation and expansion projects of academic facilities, notably of Wood Hall, the Student Recreation Center and Waldo Library. Altogether these projects resulted in total assigned academic spaces of 2,600,000 square feet, an 80 percent increase since 1970.

Virtually all academic departments are located on West Campus, although not within the tight academic core defined in 1970. Many academic programs are fragmented: classrooms, offices and labs widely scattered in different locations. Related service departments are often not in proximity, resulting in multiple stops for customers. 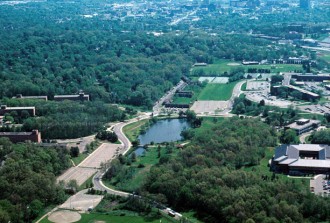 Goldsworth Valley has been maintained as recreation and green space, with intramural fields and a small pavilion.

Landscaping and pedestrian walkways, mature stands of trees and rolling hillsides are defining features of the Main Campus, and make the University unique. However, similar care and consideration was not given to the appearance of constructed campus elements—buildings, entry points or “gateways”, transition spaces and vistas. President Deither H. Haenicke initiated the successful renovations of Walwood Union in 1992 and Oakland Recital Hall (also called The Little Theatre) in 1997.

In general, East Campus buildings are of marginal soundness and require major renovation for future significant use. Most of the East Campus buildings are being used as surge space for various academic programs and as designated locations for specialty functions such as the Regional Archives. Two developments in the late 1990s caused considerable changes in campus planning for the University.

In 1998 the property of the Kalamazoo Regional Psychiatric Hospital on Oakland Drive was transferred to Western Michigan University from the state of Michigan’s Department of Community Health. Including over 100 acres, of which 53 acres would be leased back for the continued use of the hospital, this acquisition provided the University the opportunity of planning for new College of Health and Human Services facilities and related clinic and research space and for new student housing.

The new Oakland Drive Campus, bounded by Howard Street, Oakland Drive, Stadium Drive and Oliver Street, once again locates major academic programs on both sides of the Stadium Drive railroad track barrier, raising circulation and safety issues for pedestrian and vehicle traffic between and around the campuses.

The transfer included two structures on the National Registry: the Kalamazoo State Hospital Water Tower and the Gate House.

In January 1999, President Elson S. Floyd and the Board of Trustees approved the development of a new campus (the Parkview Campus) on the Lee Baker Farm property, three miles west of the Main Campus, for the College of Engineering and Applied Sciences and a Business, Technology and Research Park. 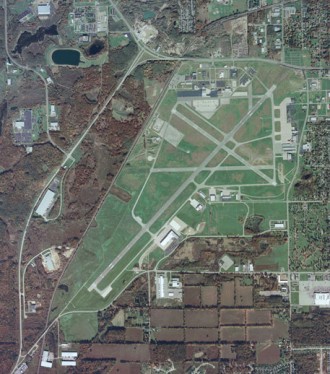 For the first time in its history, the University will have entire academic colleges and programs in locations non-contiguous to the Kalamazoo Main Campus. How the University deals with transportation, parking and transit issues for faculty, students and staff in these new locations will directly affect the overall functioning and interaction of its many programs and parts, and will have an impact on its future character and image.

In 1998 the University was recognized as a graduate intensive university by the Michigan Legislature and has recently been recognized by the Carnegie Foundation as one of the nation’s top public research universities.

WMU currently enrolls close to 30,000 students on its Main Campus and seven Regional Centers. It is the fourth largest university in the state. Main Campus is comprised of over 600 acres, including the Oakland Drive Campus, and the Parkview Campus contains 276 acres. Additional outlying properties total over 500 acres.

The University maintains 136 buildings, totaling over seven million square feet, more than 16 miles of roadways and 40 miles of walkways.