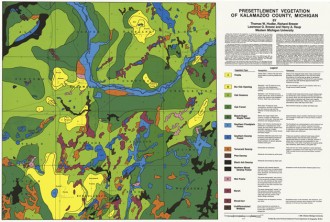 In 1981 a group of researchers from the Department of Geography—Thomas W. Hodler, Richard Brewer, Lawrence G. Brewer and Henry A. Raup—compiled a map illustrating the predominant types of vegetation covering Kalamazoo County in the years 1825 to 1830, a period just prior to settlement of the area. The work was funded by the Lucia Harrison Endowment Fund.

In 1981, Western Michigan University's "outlying" properties on the western edge of Kalamazoo County were known collectively as "the University Farm". This included the Lee Baker Farm, (deeded over by the state legislature in 1959), the Colony Farm and the Asylum Lake property (conveyed by the state Department of Mental Health in 1977 and 1975, respectively).

In 2000, the Lee Baker Farm was renamed the Parkview Campus, the new home to the College of Engineering and the WMU Business, Technology and Research Park. 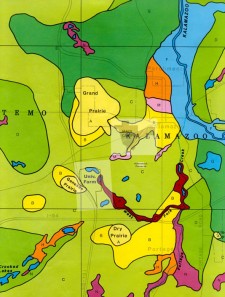 It is interesting to note that, since 1830, Asylum Lake and other similar small lakes have at various times been categorized as swamp or marshlands, examples of the changes nature makes over time.

In 1981, the WMU campus was principally comprised of the areas known as East Campus and West Campus. Other university properties included the University Farm and the Kleinstuck Preserve, given to the University in 1922.