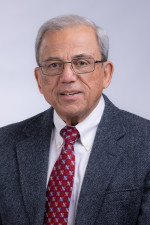 Dr. Ali. M. Metwalli is a professor of finance and commercial law at Western Michigan University's Haworth College of Business.

Metwalli was born in Egypt and has served in the health care industry in various executive, research and consulting positions since 1965. He moved to Grand Rapids in 1980 to teach for WMU and served as the director of the MBA program on Grand Rapids campus from 1985 until the end of 1999. He continues to teach full time in the WMU graduate business program, research and consult independently.

He is active in numerous civic and University activities and:

Metwalli was nominated for the 2012 Faculty Teaching Award at the Haworth College of Business.