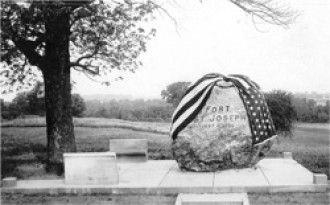 Boulder placed near the site, 1913

Fort St. Joseph lived in the collective memory of the town of Niles, MI for over 200 years after its abandonment in 1781. The fact that it had existed nearby was certainly not forgotten, made evident by a commemorative boulder placed there in 1913, as well as a granite cross erected in 1918 to replace a wooden cross that was believed to mark the burial site of Father Claude Jean Allouez, one of the first Jesuit priests at the mission. Both of these monuments are in close proximity to where we know the fort once stood. Niles' nickname, the City of Four Flags, reflects the legacy of the fort as well.

In the late 19th to early 20th centuries collectors recovered artifacts dating to the 18th century in the vicinity of the fort site which at this time was used for agriculture. Further land-use changes in subsequent decades rendered the exact location of the fort forgotten to the community. Major portions of these early collections were donated to and/or purchased by both the Fort St. Joseph Museum in Niles and the Northern Indiana Center for History in South Bend, IN and are still housed at these places today, accessible for viewing and research.

It was not until Western Michigan University archaeologists were invited in 1998 by the local heritage group, Support the Fort, to conduct a survey in search of this colonial outpost that its remnants were recovered. Shovel test pits adjacent to the St. Joseph River yielded glass trade beads, hand-wrought nails and other architectural debris, copious amounts of well-preserved animal bone, and knives stamped with the names of French cutlers. These artifacts were tangible evidence that Fort St. Joseph had once stood right on the bank of the river just south of present-day downtown Niles. This rediscovery was made largely possible by the work of the late Dr. Joseph L. Peyser, professor of French at Indiana University, South Bend, who, through extensive documentary research in the 1970s and 80s predicted that the fort likely had stood on the east bank of the river in Niles, (essentially just where its archaeological remains were uncovered) contrary to popular belief. 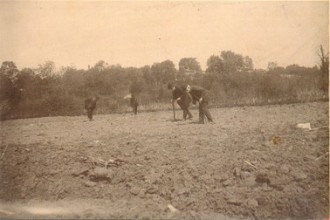 Since the initial survey in 1998 that pinpointed the fort's location, excavations have taken place at the site nearly every year in conjunction with Western Michigan University's annual archaeological field school. Prior to beginning archaeological investigations each season, one challenge the site poses must be overcome. The location of Fort St. Joseph is right on the banks of the St. Joseph River which makes the site unique in that it is partially submerged beneath the waters of the river for a good portion of the year. This does have its positives, including very good preservation of certain classes of artifacts and natural site security. However, when the St. Joseph River is within its banks, the groundwater table at the site is still extremely high making excavation of undisturbed deposits impossible. Excavation units fill with water about the time these intact deposits are reached. This has resulted in the need to employ a sophisticated site drainage system, lowering the water table enough to allow excavations into the undisturbed deposits.