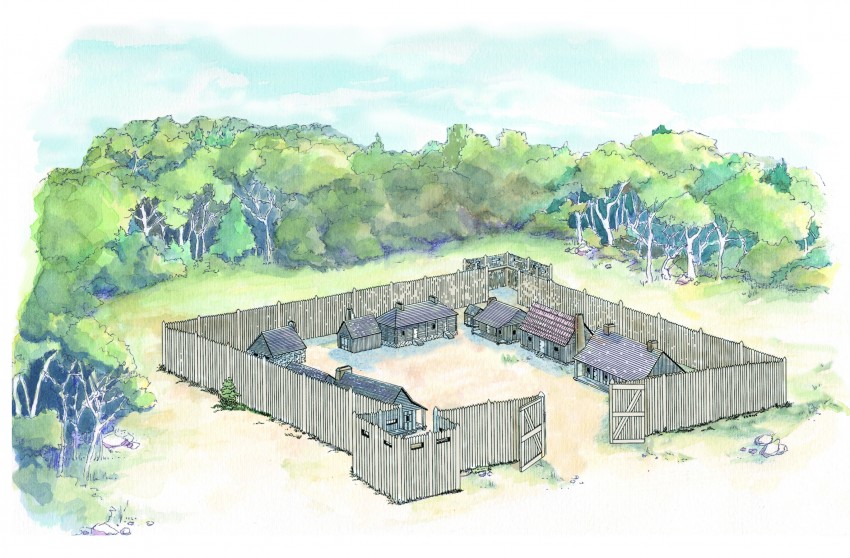 Artist's rendition of how Fort St. Joseph may have appeared

Fort St. Joseph, first established as a mission in the 1680s by French Jesuits, was one of the earliest European settlements in the western Great Lakes region. During the first half of the eighteenth century it also took on the roles of garrison and trading post. The Fort eventually supported a commandant, eight to ten enlisted men, a blacksmith, a priest, an interpreter, and up to 15 additional households. Documentary sources indicate that the fort was constructed with entrances on the north and south palisade lines and that the palisade enclosed a small commandant's house, a building that could accommodate 20 soldiers, a military storehouse, and some buildings to store trade goods and furs. In 1753, the post was estimated to consist of 15 houses, though not all of these buildings were necessarily within the palisade. The Fort became an important link in the chain of similar frontier settlements that staked out the far reaches of New France and facilitated the trade between the French and Native peoples in furs. For almost 80 years, French priests, enlisted men and traders lived at Fort St. Joseph in close contact with Native groups also living in the area, specifically the Potowatomi and Miami. Wives (in some cases Native wives) and children of the French men, as well Native slaves, were also present and no doubt played major roles in the commercial and social functioning of the post.

In 1761, during the French and Indian War, the fort came under British control. While the French sought alliances with indigenous populations through practices such as gift-giving and intermarriage, the British approached Native relations in a more domineering fashion and with little regard towards establishing the mutually beneficial arrangements that had characterized French rule. This led to the uprising known as Pontiac's Rebellion. In the spring of 1763, supporters of the Ottawa leader attacked Fort St. Joseph and other posts in the Great Lakes region in order to force the British from the area and encourage the return of the French. The English did not re-garrison the fort after this attack until a brief occupation in 1779; however French traders remained in the area until roughly 1780. In 1781 a small contingent of French and Natives supported by the Spanish governor at St. Louis raided the fort, claiming it for Spain, though remaining at the site for only a day. After this episode the post was largely abandoned, though trade likely still continued in the general vicinity into the nineteenth century after the area had become part of America's Northwest Territory.