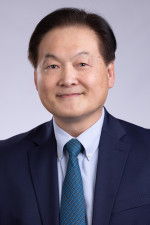 Dr. J. Michael Tarn is a professor of business information systems and associate dean for international programs in Asia at Western Michigan University's Haworth College of Business. From 2009 to 2022, Tarn served as chair of the Department of Business Information Systems.

As a strategic thinker, Tarn is a pioneer of interdisciplinary programs and centers across the business college and University. With his international network, he has been a key facilitator of global engagement for WMU. Since 2009, he has assisted in establishing international partnerships with more than 20 universities in Asia. In 2012, he helped the college establish a dual-degree bachelor’s of business administration program with Dong-A University in South Korea, which became the first international dual-degree undergraduate program at WMU. In 2014, a similar program with National Chung Cheng University in Taiwan was established. In 2019, he facilitated the launch of WMU’s MBA program in Taiwan.

Notably, he initiated a partnership with Guizhou University of Finance and Economics in China in 2013, which laid the foundation for the establishment of a dual-degree B.B.A. program in 2015 and then a joint college, Western Michigan Institute (WMI), in 2017.  As of Fall 2022, WMI has grown into a unique cross-national college with more than a thousand students. Tarn has been serving as associate dean of WMI since 2017.

In 2017, Tarn was awarded the Bernard Meldrum Professorship of Business Information Systems at the Haworth College of Business. He has been recognized and appointed as an honorary professor by the School of Business at Macau University of Science and Technology since 2017.