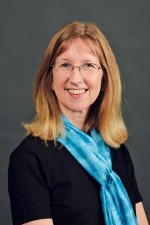 Dr. Molly Lynde-Recchia is a professor of French and chair of the Department of World Languages and Literatures at Western Michigan University.  She is affiliated with WMU's Medieval Institute.

Lynde-Recchia’s research and teaching specialty is Old French language and literature, and her publications in this area include two books. Her first, "Prose, Verse, and Truth-Telling in the Thirteenth Century" (French Forum, 2000), deals with the function and aesthetics of literary form and the shift from verse to prose in early thirteenth-century France. Her second book resulted from a sabbatical leave project involving manuscript study in France and is the first critical edition of Wauchier de Denain’s "Vie seint Marcel de Lymoges [Life of Saint Martial of Limoges]" (Droz, 2005). She is co-editor-in-chief of Transference, the department’s literary journal featuring poetry in English translation from the languages taught in the department.