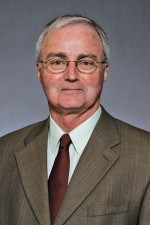 Dr. Michael Pritchard is a professor in the Department of Philosophy and a co-director of the Center for the Study of Ethics in Society at Western Michigan University.

Pritchard is interested in ethical questions related to biomedical research, especially those areas that concern the Belmont Report, the role of institutional review boards, and questions about research integrity and misconduct. He has twice chaired WMU’s Institutional Review Board, served on the Bronson Hospital Ethic Committee for nine years and was on the former Upjohn Company’s Animal Welfare Committee for three years. He was principal investigator of WMU’s three year project entitled, “Research Ethics: An Institutional Change Model,” funded by the National Science Foundation, and co-principal investigator of several NSF funded projects on teaching ethics in pre-college science classes.

In 1979 Pritchard co-edited (with Wade L. Robison) Medical Responsibility: Paternalism, Informed Consent, and Euthanasia (Humana Press). He has published several articles on conflicts of interest, including one in Academic Medicine (Dec. 1996), and also published a series of articles in Radiology Management that formed the basis for a continuing education course on medical ethics. In 1999, Pritchard with Theodore Goldfarb prepared a text, Ethics in the Science Classroom. In this text they present and analyze a number of case studies related to biomedical ethics. Finally, he published Professional Integrity (Kansas, 2007), which explores ethical issues across a variety of professions, including medicine.

Pritchard has taught Phil 3340: Biomedical Ethics in WMU’s Lee Honors College and courses on research ethics at both the undergraduate and graduate levels. For seven years he was on the faculty of an NSF funded project, “Graduate Research Ethics Education,” held at Indiana University, with doctoral students in the sciences from across the country selected as participants. These summer workshops gave special attention to ethical issues in biomedical research.