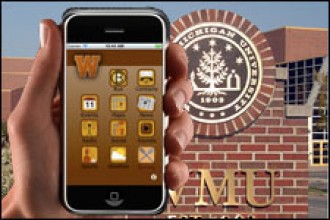 KALAMAZOO--Western Michigan University has released version 1.2 of WMU Mobile, its smartphone apps for Android and for iPhone and other Apple mobile platforms.

WMU Mobile was created as a senior engineering project by six computer science majors and released in May 2011. Then-seniors Ryan Berry, Kyle Falkenstein and Matthew Rodgers developed the Android version of the app, while Christopher Ashbay, Justus Reule and Timothy Wickey created the Apple version.

"WMU Mobile has a number of distinctive features," said Dr. Keith Hearit, vice provost for strategic enrollment management, "but what's more impressive than the product is the way it was created. Typically, universities pay a vendor to create an app. We had six talented computer science majors design and create ours."

The University commissioned the project through the offices of Strategic Enrollment Management, Information Technology and University Relations, in cooperation with the Department of Computer Science and with support from a variety of WMU offices and campus services.