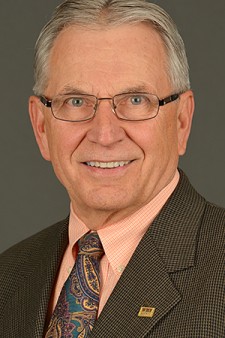 KALAMAZOO—A geologist with more than 40 years of experience in mineral exploration, mineral development, environmental consulting, business operations and safety compliance has been appointed director of the Michigan Geological Survey at Western Michigan University.

Effective Oct. 2, John A. Yellich became head of the survey, which is housed in WMU's Department of Geosciences.

Yellich has worked in more than 30 states as well as conducted mineral assessments in Canada and Australia and both mineral and petroleum assessments in China. He also has worked extensively on the development of mineral exploration models and the testing, confirmation and successful validation of potential targets in Michigan, Minnesota and Canada.

Other major duties include leading and collaborating with internal and external constituents on various research projects and serving as a liaison with local, state and national entities involved or interested in the survey's research, geologic repository and outreach initiatives. He will also develop new programs and funding initiatives for the survey, supervise its field work, and write research proposals and reports.

A Michigan native, Yellich is an exploration, mineral development and environmental geologist. He has experience in selective mineral resource areas in Minnesota, Wisconsin and Michigan; all of the western states; selective areas of Canada's Ontario, Saskatchewan and Alberta provinces; the northern and southeastern Australian Territories; and selective Chinese oil and mineral provinces.

He has more than 25 years of consulting experience and has authored several feasibility reports for selective projects. In addition, he guided and reviewed surface water and ground water investigations and evaluations and negotiated regulatory agreements on many sites during the conduct of environmental liability assessments for Union Pacific.

Yellich developed a business model for assessing corporate environmental liabilities associated with that Fortune 50 company's leased properties in 21 states and the process for the expedited abatement of those liabilities. This process minimized expenditures and increased the sales prices of many of the properties.

Previously, Yellich had been environmental and safety manager for the Western United States at Beazer Homes USA since 2005. As part of that role, he conducted internal audits and training programs regarding stormwater and OSHA regulations in nine states. He also conducted environmental liability assessments of properties for future residential construction.

About the geological survey

The survey is Michigan's designated geoscience agency, with responsibility for mapping and assessing the state's minerals, soils, groundwater and other geological resources. Michigan Gov. Rick Snyder signed legislation Oct. 11, 2011, that transferred those survey functions from the Michigan Department of Environmental Quality to WMU.

That move made the survey part of the University's acclaimed Department of Geosciences. The department already was home to the Michigan Geological Repository for Research and Education, which is now part of the survey. In addition to its mapping, assessments and water resource functions, the survey will work through the repository to build awareness among citizens for the importance and value of the natural resources in Michigan.