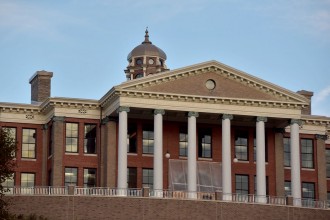 Renovation of Heritage Hall was a 16-month process.

KALAMAZOO, Mich.—The oldest building on the Western Michigan University campus will reopen this month as the most environmentally sophisticated on the WMU campus and in all of southwest Michigan.

Heritage Hall is the birthplace of WMU, and it has graced the top of Prospect Hill overlooking downtown Kalamazoo since it opened in 1905—just two years after the University was established. Following a 16-month renovation effort, the facility will re-open during a gala grand opening event at 2 p.m. Friday, Oct. 23. Thousands are expected to be in attendance and eager to get their first look at the facility that will be the home of the WMU Alumni Center.

The renovation was done with the aim of achieving LEED Platinum certification, which would make it the first such platinum certification in southwest Michigan and one of fewer than 15 in the state. Construction made use of salvaged materials, used locally sourced new materials and incorporated geothermal heating. 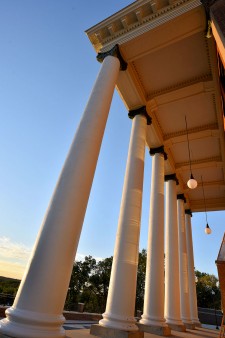 The transformation of the now 53,000-square-foot facility from its old presence to the new could not be more dramatic, say those most closely involved in the effort. And it was far from easy.

"It has been the most difficult renovation project I've ever worked on," says Matthew Brecker, project manager for the Christman Co., the construction firm that has been overseeing the transformation.

Brecker notes that the original architect E.W. Arnold of Battle Creek left little documentation for the original specifications, and the building was built during a period of limited building standards and code requirements. The building, once known as East Hall, wasn't square and did not meet even the most minimal of modern load-bearing requirements.

"Literally three people standing together in the building meant the per-square-foot load capacity was exceeded," says Brecker as he noted the challenge of transforming the interior into a building with such new features as conference rooms, a cafe and a ballroom that can accommodate 180 people.

The project's architectural design was done by Tower Pinkster. Helping to ensure the project retained the historic character of the building was historic preservation expert Gene Hopkins from Hopkins Burns Design Studio of Ann Arbor, a firm that oversaw the renovation of the Michigan Capitol and the Grand Hotel.

Becoming the most efficient campus building

"In terms of the design aspects of the project, we began with two major themes," says Bjorn Green, senior principal with Tower Pinkster. "The first was restoring the grandeur and legacy of Heritage Hall as the birthplace and touchstone of the University. In essence, we wanted to restore and enhance the original postcard view of 'the Acropolis of Kalamazoo' on Prospect Hill. The second was a vision to transform the building from the least efficient building on campus to the most efficient building on campus, and pursue a LEED Platinum rating for the project."

Green says design solutions that helped achieve those goals included the character, massing and scale of two new additions—one at each end of the building—that are used for such code-required elements as bathrooms, ADA elevator and egress stairs.

Turning the campus' least-efficient building to the status of most efficient was an enormous task. The building had no insulation, no central cooling and utilized campus steam for heating. A series of chimneys throughout the building functioned only to permit fresh air to circulate in the building. A significant part of the renovation included asbestos and lead abatement. 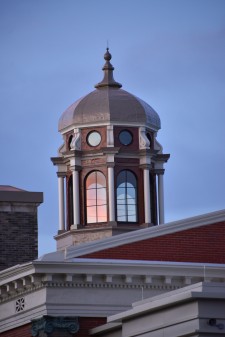 Windows were manufactured to resemble those original to the building.

Today, the building that was renamed Heritage Hall in July boasts these enhancements: