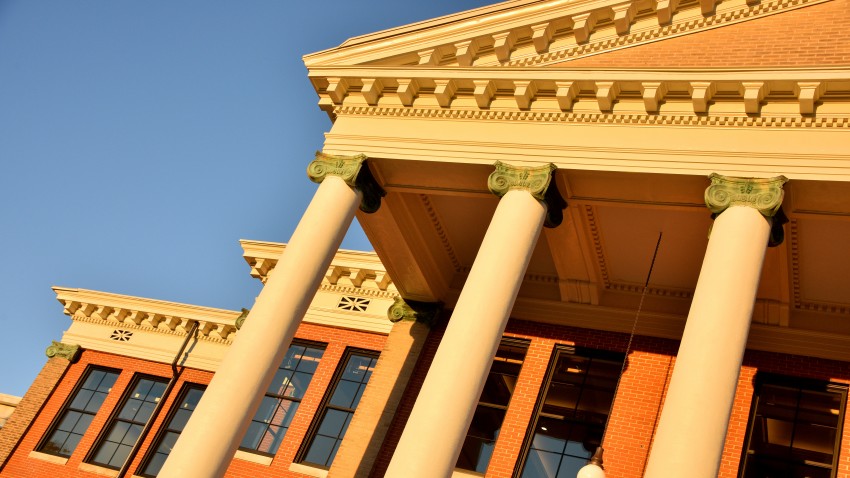 An outdoor ribbon-cutting ceremony at 2 p.m. will mark the return to service of the building first opened in 1905 and long heralded as "the Acropolis of Kalamazoo." Heritage Hall was the campus' first building and was constructed after the Kalamazoo community successfully competed against 27 other cities in 1903 to have the state locate its new Western State Normal School atop Prospect Hill. A 16-month renovation has just been completed to return the building to service, making it a new resource for both the campus and city.

The event will focus on the role of values and heritage in creating WMU. It will feature remarks by Richard G. Haworth, chairman emeritus of Haworth Inc., whose family and company made a major in-kind gift to furnish the newly renovated facility that will be home to the WMU Alumni Center. Haworth is a 1964 WMU alumnus who won the 2004 Distinguished Alumni Award and is a trustee emeritus for the University, having served on the WMU Board of Trustees from 1991-2001 and as its chairperson in 1997.

Also speaking at the ceremony will be:

In addition to the Haworth gift for the building, a number of other gifts will be highlighted by speakers, including a major gift from the Irving S. Gilmore Foundation and large private gifts that have led to named rooms within the new facility.

The program also will include music provided by the Bronco Marching Band and a flag-raising ceremony by the Army ROTC Bronco Battalion. That ceremony will feature a U.S. flag that once flew over the U.S Capitol and was sent to WMU for the occasion by Congressman Fred Upton. The flag pole on site was a gift from the WMU Class of 1942 and was "Dedicated to all men of Western in the Armed Services of the United States in World War II."

Following the ribbon cutting, self-guided tours of the building will begin and last until 4 p.m. In addition to touring the building, those attending the ceremony will be able to visit a number of stations around the building that will include:

The event is free and open to the public, and no advance registration is required. The Friday grand opening and two succeeding days of tours are expected to attract thousands of area residents eager to be among the first to tour the facility. A special commemorative pin will be distributed to the first 3,000 people in attendance.

For the Friday event, off-site parking and a shuttle service have been arranged to ensure visitors can easily attend. Shuttles that day will run on a continuous loop from nearby parking lots 10, 11, 12, 95, 102, 104 and 105. The special event shuttles will be available on Friday only from 1:30 to 4:30 p.m. and will drop guests off at Heritage Hall.

Complete details on the three days of grand opening events can be found at http://bit.ly/1OpYWih.

After opening weekend, the building will be closed to the public for three weeks to allow for project completion and staff move-in.