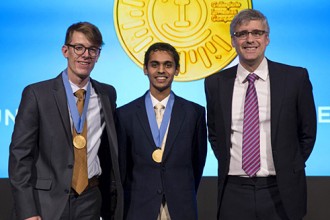 KALAMAZOO, Mich.—The creation of a lifesaving medical tool for use in developing nations has resulted in a Western Michigan University student team capturing the top spot in the Collegiate Inventors Competition, a program of the National Inventors Hall of Fame sponsored by the U.S. Patent and Trademark Office and the AbbVie Foundation.

WMU May alumnus Stephen John of Portage and senior Joseph Barnett of Kalamazoo, were named winners of the undergraduate gold medal during an event held Nov. 17 at the patent office's headquarters in Alexandria, Virginia. With the win against undergraduate finalists from Columbia, Harvard, Johns Hopkins and Penn State universities as well as the University of Virginia, the WMU duo takes home a $12,500 cash prize.

Barnett and John's invention, NeoVent, which has now earned five national innovation prizes, is a respiratory support mechanism designed to treat critically ill infants, particularly those who live in developing nations. NeoVent converts a low-tech respiratory device into one that provides the additional benefit of a ventilator, but at much less cost. The invention could help thousands of babies in underdeveloped parts of the world.

Earlier this year, John and Barnett were named winners of the:

In October, Barnett traveled to Beijing to attend the Grand Challenges Global Health Summit, an international meeting co-hosted by the Gates Foundation, USAID, and China's Ministry of Science and Technology, among others. The summit was intended for leaders in global health to collaborate on healthcare solutions for the underserved. Barnett's trip was sponsored by the Lemelson Foundation, which has partnered with Barnett and John to get their technology to hospitals in the developing world.

About the latest competition

Established in 1990, the Collegiate Inventors Competition encourages innovation, entrepreneurship and creativity by recognizing undergraduate and graduate students for breakthrough inventions.

"Each year, these emerging innovators transform their ideas into solutions for real world problems," says Michelle K. Lee, under secretary of commerce for intellectual property and director of the U.S. Patent and Trademark Office—USPTO. "They are an inspiration to those of us committed to promoting innovation and the value of intellectual property."

Winners were announced at an awards ceremony hosted by Mo Rocca, CBS Sunday Morning correspondent and host of The Henry Ford's Innovation Nation. Leading up to the ceremony, finalists showcased their inventions and interacted with thousands of USPTO patent and trademark examiners, sponsors, media and the public at the Collegiate Inventors Competition Expo, held Nov. 16-17. 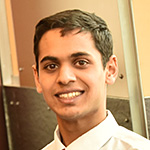 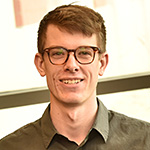 Joseph Barnett started working with students in Honduras after hearing of a shortage of teachers there. He has been to Honduras six times in the past five years, where he has driven school buses, led clothing donation efforts and volunteered in a local hospital, also fixing medical equipment. He plans to volunteer as a teacher in Honduras for one year before attending medical school.

Also a critical part of the team, notes Barnett, was Dr. Peter Gustafson, associate professor of mechanical and aerospace engineering, who has served as the team's advisor for more than two years. As advisor to the winning undergraduate team, he was also honored at the competition awards ceremony.

The team spent two years developing NeoVent. They were helped by a Research and Creative Activities Award they received from WMU's Lee Honors College, and they were a part of WMU's Haworth College of Business student business accelerator, Starting Gate. Starting Gate helped them set goals, develop a business plan, meet regularly with mentors, attend workshops and pitch to investors.

A video explaining their work is at youtube.com/watch?v=z985abJITQE&feature=youtu.be.