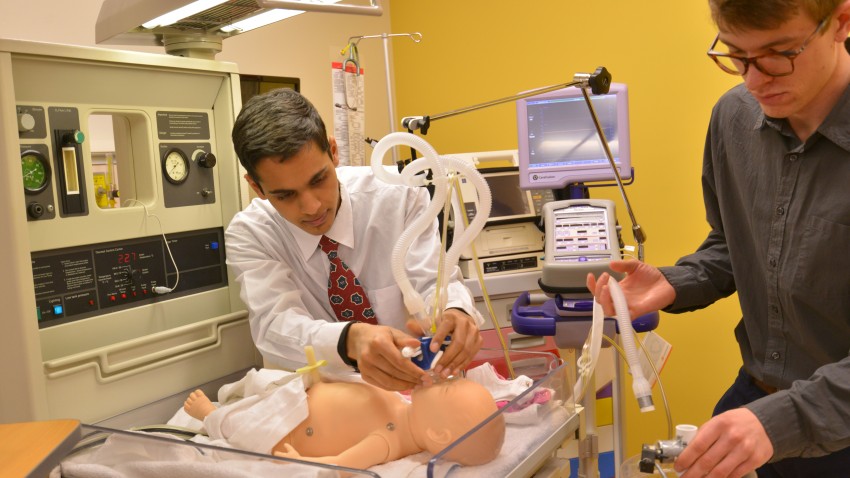 The Brian Patrick Thomas Entrepreneurial Spirit Award is to be awarded annually to the company in Starting Gate, WMU's student business accelerator, which seeks to move teams of people to a common cause with a higher social purpose. This is the inaugural award.

This past year has been one of significant activity for John and Barnett, as they have developed their company AIM Tech. Participants in Starting Gate during the 2014-15 academic year, their initial goals were to focus on customer discovery to see if their device would be utilized in Third World countries that have little funding for respiratory equipment. As they worked on their business model, they also developed a working model of NeoVent after extensive lab work. They currently have a patent pending for the device and are working to start clinical studies in Nepal with working prototypes.

"Stephen and Joseph used Starting Gate as their think tank and achieved every milestone that they set out to accomplish," says Lara Hobson, director of operations for Starting Gate. "This dedication, paired with the mission of their company, is what set AIM Tech apart as the company most deserving of the award."

"We are honored to have received this funding and are using it to produce and test devices for clinical trials," says John. "We've received so much help along our way from individuals in southwest Michigan—both from WMU and from the community. As a business, we hope to give back, hopefully by creating jobs here while saving neonatal lives around the world."

John and Barnett teamed up to create NeoVent after John learned from a Respiratory Therapists Without Borders official about the need for a low-cost medical device that could deliver biphasic positive airway pressure ventilation to prevent lung collapse in premature babies experiencing respiratory distress in hospitals lacking the costly medical equipment that typically provides this life-saving therapy.

They began working on the device more than a year and a half ago in John's home and spent months refining it in Dr. Peter Gustafson's lab in WMU's College of Engineering and Applied Sciences. What they ultimately developed is simple, energy efficient, safe and inexpensive. They estimate that NeoVent will be priced at around $25 versus the thousands of dollars a ventilator costs.

"Stephen and Joseph have demonstrated perfectly the essence of this award—the ability to use creativity, compassion and professional skills to serve a higher purpose through their business," says Dr. Kay Palan, dean of the Haworth College of Business. "We are very proud of their efforts and are excited to see NeoVent come to the marketplace and address a critical need."

Thomas is an alumnus of WMU who earned his degree in industrial marketing in 1996. He began his professional career at Forkardt Inc. in Portage and later became an account executive manager for Honda Manufacturing at global automotive giant Magna International. He joined OtterBox in 2003 and was eventually named CEO where he was responsible for leading global expansion efforts and was the chief visionary in positioning OtterBox as an innovation technology company primed to extend product offerings outside the premium protective case industry.

During his tenure, OtterBox achieved several milestones and was consistently named one of the fastest growing and most innovative companies in the U.S. by several business organizations. Thomas’s passion for entrepreneurial thinking and social entrepreneurship sparked his desire to establish this award to support student entrepreneurs in their efforts to create enterprises that operate harmoniously with employees, communities and non-profit organizations, creating a strong synergistic benefit for all stakeholders.

Starting Gate is a student business accelerator that gives students rich and valuable resources to develop their startup companies. It is located in the Haymarket Building in downtown Kalamazoo and operated by the Haworth College of Business Center for Entrepreneurship and Innovation in partnership with the WMU Office of Community Outreach. The accelerator is open to all WMU students through a competitive application process in which students must demonstrate a promising idea for a product or service, which can be launched within a short period of time. Starting Gate provides a fast-track to business launch.