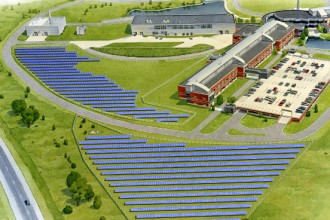 Rendering of the Parkview solar garden as originally envisioned—courtesy of Consumers Energy.

Among the most noticeable projects is the large-scale solar garden Consumers Energy installed on the Parkview Campus that was activated Aug. 15.

Visible to motorists traveling along U.S. 131, the project consists of a photovoltaic array of some 4,000 solar panels on 8.5 acres of land immediately west of Floyd Hall, the building that houses WMU's College of Engineering and Applied Sciences.

The gardens—solar power plants featuring expansive "fields" of large solar panels—are owned and operated by Consumers Energy. They are part of the company's Solar Gardens program, in which customers support the development of new renewable energy in Michigan while reducing their carbon footprint.

WMU's solar garden will add 1 megawatt of electricity to the electrical grid, or enough energy to power 200 typical homes.

The panels in the Parkview solar garden were provided by solar cell and module manufacturer Suniva, which has a module assembly facility in Saginaw. Engineers and electricians from around the state designed and installed the garden's panels and infrastructure.

One unit features large-scale panels similar to the panels in Consumers' solar garden while the other unit features "solar shingles" attached to a wooden frame to simulate a residential roof system. To build the two units, the University contracted with Solar Winds Power Systems LLC of Shelbyville and solar shingle manufacturer Luma Resources of Rochester Hills.

Bazuin notes that Consumers also is providing $120,00 over six years for Solar Learning Modules that the University will use to educate WMU students, expose area K-12 students to solar energy, and train emergency first responders and other government and community groups in solar arrays and related energy systems.

Perking up the pond

The enhancement project included extensive landscaping around the pond as well as dredging the pond and filtering out decades of silt and other fine materials deposited through stormwater discharge.

Visitors to the area trek across the much-cleaner pond via a new footbridge, which is safer for year-round use thanks to built-in snow-melt technology. They also can enjoy congregating and "eating out" in a sturdy new masonry gazebo outfitted with picnic tables.

Walking paths, seating and gathering spaces have been added throughout the area. Plus, native and wetland flora are being planted around the pond to provide a buffer for wildlife.

Although the area's ducks moved back in soon after the project's completion, the pond's resident swans will not be returning, reports Peter J. Strazdas, WMU associate vice president for facilities management.

"To prevent stress, they were relocated to the Parkview Campus for the duration of the enhancement project. They have now grown roots there and will remain at their new home," Strazdas says. "But we're working with a local environmental group to find native swans that can reside at the Valley pond."

Another initiative that came to a successful end this summer was a five-day pilot project testing the feasibility of using goats as an environmentally friendly way of helping to control invasive and unwanted vegetation in campus woodlots.

Nicholas J. Gooch, WMU horticulturist, proposed the project, which was conducted in July. A crew of 10 goats was rented from Munchers on Hooves in Coldwater, and allowed to graze on a small, overgrown tract of property between the Sindecuse Health Center and Goldsworth Valley Pond.

"Overall, the project was positive. We accomplished our main objective of trying to make this a reality and getting people to think outside the box in terms of landscape management issues," Gooch says. "Pending available funding, we would like to have the goats back next spring for a period of about 15 weeks to work on the remaining 16 acres by the pond."

He adds that because of the pilot project, landscape services has a better understanding of how much acreage to fence off at a time for the goats and what happens when new browsing areas are opened up.

"Now, we're going to review what the animals did and didn't eat, take note of how the area we had them in regrows compared to area that wasn't grazed, and seek grants and other funding to rent the goats again," Gooch says. "Ultimately, we'd like to set the goats to work on the same and different campus areas for the next three to five years. We'd also like to multiply their value by integrating them into the curriculum as an education or research component in biology or environmental and sustainability studies."

The West Overlook above Oakland Drive was finished, and several additional decorative pole lights installed to illuminate the area. A fanciful set of winding steps now connect the overlook platform to the stairway that leads down to the sidewalk running alongside Oakland.

The new outdoor feature replicates the feel, although not the open vista, of the grander overlook built on Heritage Hall's east side, which provides a spectacular view of downtown Kalamazoo.

In addition, leaders of the Western Student Association volunteered in August to improve landscaping on the hall's west side by planting additional brown-eyed Susans to complement the Josephine Wing (Jackson) Memorial Garden. That garden honors a pivotal early employee who suggested that brown-eyed Susans be the inspiration for WMU's school colors.

As an added bonus for Prospect Hill's revitalization, the Heritage Hall renovation won a 2016 Governor's Energy Excellence Award Aug. 11 for Best Public Project. The 110-year-old facility, WMU's birthplace, was the least energy efficient building on campus before being renovated. Now, it is one of the most efficient and environmentally sophisticated buildings in the region.

They included repaving various parking lots and sections of roadway, replacing several roofs, upgrading a number of classrooms, and improving the mechanical and electrical infrastructure in many buildings.

Some projects still have a long way to go, however, notably the initiative to improve wayfinding on campus. For a short description of this project, visit wmich.edu/facilities/planning and click Capital Projects. To watch the Sept. 12 public presentation regarding progress to date, visit spaces.hightail.com/receive/CvHTG.

To learn more about campus beautification and efforts to promote environmental stewardship and sustainability, visit wmich.edu/facilities/landscape.