Education researcher to be honored as WMU emerging scholar 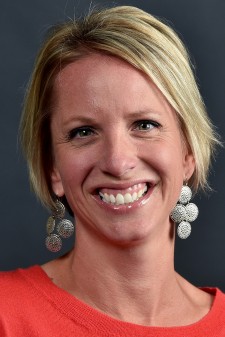 Dr. Jessaca Spybrook, who recently received an $800,000 National Science Foundation grant to head a team of researchers from WMU, the Biological Sciences Curriculum Study and Abt Associates, will be presented with the 2016-17 Emerging Scholar Award during WMU's Fall Convocation recognition ceremony beginning at 10:45 a.m. Friday, Sept. 30, in the Bernhard Center. The event also will feature WMU President John. M. Dunn's State of the University address and presentation of other campuswide honors, including the Distinguished Teaching and Annual Make a Difference awards.

The awards presentation and Dunn's address will be part of an expanded slate of daylong convocation activities that start at 8 a.m. and will feature a keynote speaker, an event kickoff, sessions with previous award winners and a picnic luncheon after Dunn's address.

Spybrook's grant project will mine a treasure trove of large-scale data sets, analyze them and come up with ways to inform the design of large evaluations of teacher development initiatives. She also recently received a fellowship to help put together a registry that could vastly improve the structure and transparency of impact studies in education. She spent the 2015-16 academic year serving a fellowship with the Society for Research on Educational Effectiveness, leading a registry project that will improve the structure and availability of information on impact studies in education. The registry would not only inform those undertaking studies to help improve study design, but also make study details accessible to funders, policy-makers and other researchers.

"Dr. Spybrook has been an extremely productive scholar," wrote a fellow WMU education researcher, noting her work has been published in more than 20 scholarly, peer-reviewed journals, and she has served as the principal investigator or co-PI for research projects totaling about $3 million.

The nominator noted that Spybrook also received the prestigious National Academy of Education/Spencer Postdoctoral Fellowship and has lectured and consulted widely. "Dr. Spybrook is a productive and influential scholar," the nominator wrote. "As a methodologist in statistics, Dr. Spybrook's impact goes beyond the discipline to reach the community and society at large."

Spybrook has garnered significant international and professional recognition for her work on estimating the power in single-level and multi-level randomized trials. She was invited to present her work at the annual meeting of the Society for Prevention Research in Quebec, Canada. She also has been widely published in journals based outside the United States.

Spybrook came to WMU in January 2008 as an adjunct faculty member in Interdisciplinary Program Evaluation and became an assistant professor in the Department of Educational Leadership, Research and Technology in August of that year, before becoming associate professor in the department in 2013. She earned a bachelor's degree in elementary education in 1999, a master's degree in applied statistics in 2003, and a doctoral degree in education studies with a focus on quantitative methods in 2007, all at the University of Michigan.

Spybrook's nomination also was enthusiastically supported by researchers outside WMU.

"The strength of Jessaca's scholarship, its impact on the fields of both education research and public policy analysis, and the broad recognition of her contributions to the field among the nation's top applied statisticians and intervention researchers make Jessaca highly deserving of such an award," wrote a colleague at the University of Pennsylvania Graduate School of Education.

Another colleague, this one at Northwestern University, also noted her impact on scholarship.

"Spybrook has had an unusually large impact on scholarship for a scholar of her academic age," he wrote. "…Her scholarship has played a major role in improving the design of randomized field experiments in education and the social sciences."