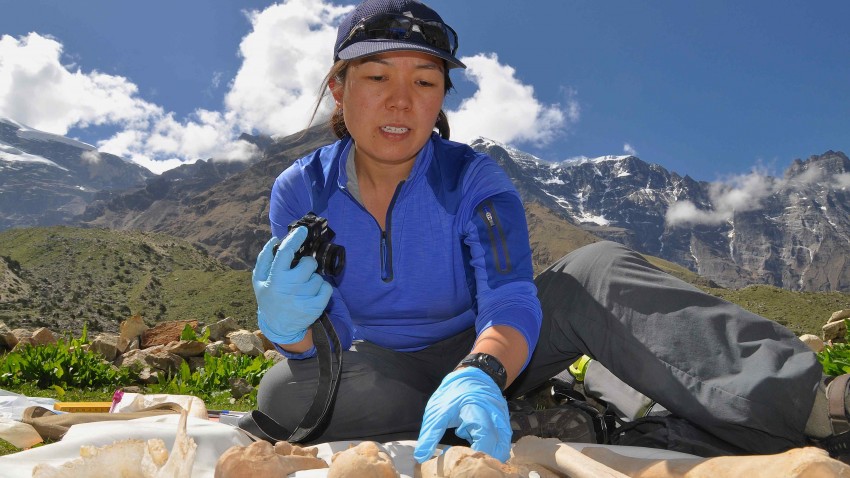 KALAMAZOO, Mich.—A Western Michigan University faculty member with expertise gained through years of studying the skeletal remains of ancient humans is in a new PBS documentary.

Dr. Jacqueline Eng, associate professor of anthropology, is among the team of researchers and climbers featured in "Nova: Secrets of the Sky Tombs," which aired to a worldwide audience Jan. 4.

The documentary recounts the international team's efforts to understand human settlement in the forbidding landscape of the towering Himalayas—one of the last places humanity settled, but a place where some of the world's most enigmatic discoveries are being made.

It includes impressive visuals from expeditions to Nepal from 2010 to 2016, as well as interviews with Eng, along with other team members who are experts in specialties such as archaeology, genetics, Tibetan history and culture, and early textiles and metals.

In "Secrets of the Sky Tombs," daring team members scale sheer cliff sides looking for clues to how people found their way into an area called "The Roof of the World" and adapted to the high altitude.

The team's work has resulted in significant discoveries about the genetic adaptations that allowed certain people to survive in the Himalayas—adaptations seen in their decedents today—as well as about the location they came from and their burial rituals.

"The human body has the amazing capacity to adapt to all manner of challenges, and the skeletal and dental remains can record the imprints of those stresses and adaptations—from evidence of malnutrition and disease, to signs of trauma and recovery," Eng says. "The ways in which people are buried also offer clues about cultural beliefs and the society in which they lived."

After weeks of arduous hiking for each expedition, the team finds rock-cut tombs filled with human bones and important artifacts, including gold masks and Chinese silk dating back a thousand-plus years. 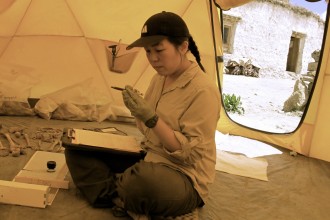 In 2013, Eng sifted through thousands of pieces of recovered bones (photo by Susan Sims).

Most of the finds have been collected by the team's expert climbers due to the dangerously eroding caves that house them. And with each revelation from their "rescue archaeology," the team is piecing together evidence of elaborate rituals and beliefs designed to ward off the restless spirits of the dead.

"I've enjoyed interacting with the local people and learning about their history, collaborating with scholars from many different fields, and working with an intrepid crew of climbers and filmmakers," Eng says about her latest experiences on the team.

Eng has gained international prominence as an expert in determining the health of ancient human populations as revealed by their skeletal and dental remains. Most recently, she has been examining remains from the Upper Mustang region of Nepal as a member of the ongoing project featured in the PBS documentary. She joined the team in 2010 and since then, has participated in four of its expeditions.

A bioarchaeologist, Eng specializes in doing the project's skeletal studies, investigating issues of settlement, migration, health and mortuary tradition. As a researcher, she is particularly interested in deciphering the impact of stress, disease, diet, trauma, and the effects of increasing socioeconomic complexity and social inequalities on the health of various members of ancient human populations.

Eng also has investigated burial collections from Northern China and the Inner Asian (Eurasian) steppe, including China and Mongolia, and analyzed burial populations in Iceland, Romania and the United States. In addition, she has contributed to the Global History of Health Project, an NSF- and NIH-funded investigation of the history of human health over the past 10,000 years.

"Nova: Secrets of the Sky Tombs" will air on PBS at future dates and times and currently is available for viewing online at pbs.org/wgbh/nova.

For more information about Eng or WMU's anthropology program, visit wmich.edu/anthropology. A detailed story about Eng and her work on the Upper Mustang project is available at wmich.edu/international/eng-spotlight.