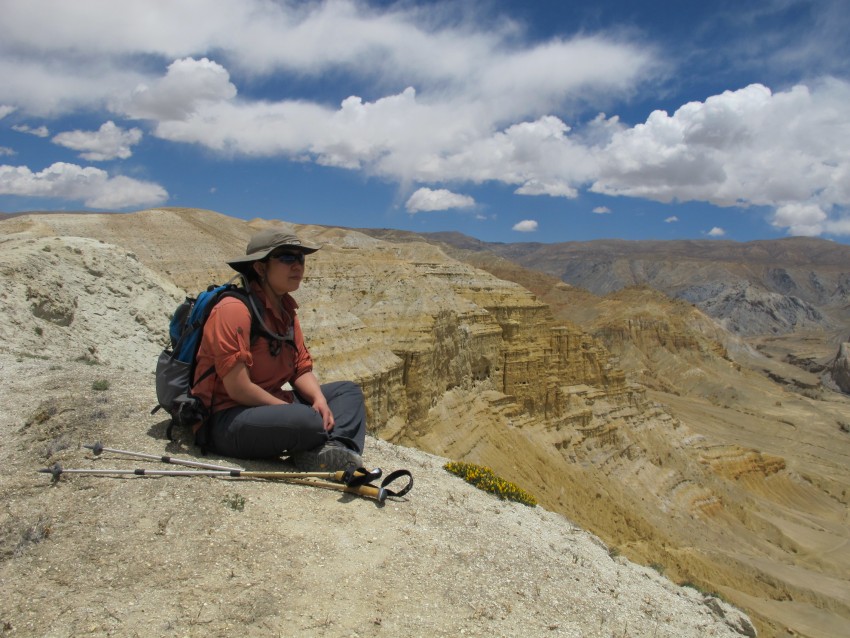 Evidence of what might be an ancient funerary de-fleshing ritual found in human-made caves in the Upper Mustang region of Nepal has been discovered by Dr. Jacqueline Eng, a Western Michigan University bioarcheologist, as a member of a research team that is funded in part by the National Geographic Society.

The team includes archaeologists, historians, linguists, and other specialists participating in an anthropological exploration of the settlement history of the Upper Mustang region lead by Dr. Mark Aldenderfer, dean and professor of the School of Social Sciences, Humanities and Arts at the University of California, Merced. The team’s work has been featured on National Geographic’s website, in a society documentary,“Cave People of the Himalaya,” that aired on PBS in February 2012, and in the October 2012 issue of the society’s magazine.

Eng’s research interests are in the health of ancient human populations as revealed by their skeletal and dental remains. Through this bioarchaeological perspective, she has conducted osteological research on hunter-gatherer populations in California, Viking Age and Conversion Age inhabitants of Iceland, post-medieval peasants from Transylvania, nomadic pastoralists of Mongolia, and numerous societies from China’s northern frontier that date from the Neolithic age to the Mongolian Dynasty. Through the Transylvania project, Eng was a contributor to the Global History of Health Project, a NSF- and NIH-funded investigation of the history of human health over the past 10,000 years.

“I am interested in how humans have adapted over time, as seen through their bones,” said Eng, an assistant professor of anthropology at WMU since 2008. “In 2010 I was contacted by Dr. Mark Aldenderfer, who has been working in higher-altitude population areas of the Andes and more recently in Tibet. He started looking at the caves in Mustang in 2008—an intriguing area situated on what previously had been the region’s salt route. You can see a lot of caves up high on the cliff faces that were used for living, defense and funerary purposes. What Mark was interested in was the movement of people into this region and where they were coming from. To help with that, he needed someone to look at the bones.” 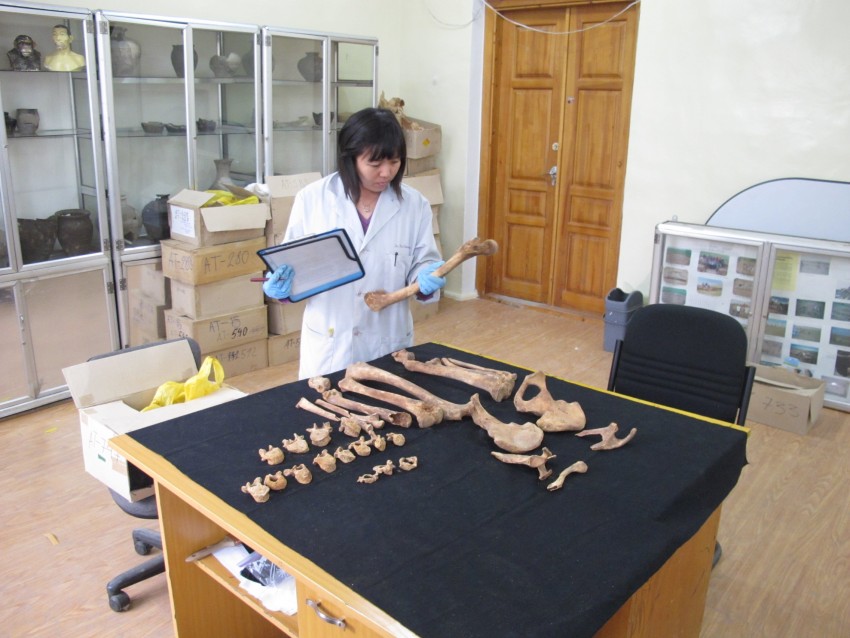 The skeletal remains of ancient people can shed light on cultures that existed thousands of years ago, Eng says. By examining isotope signatures, for example, researchers can tell whether people migrated to a region or grew up there. Researchers can also use skeletal and archaeological evidence to reconstruct the type of community a person lived in, the historical context in which they died—such as whether it was a time of war or a time of peace and prosperity—their general health, and clues about funerary traditions.

Eng became interested in examining skeletal remains as an undergraduate student at the University of California Davis, and did her honor's thesis looking at the health of individuals from three different periods to see if it had changed or if there were gender differences. She completed her dissertation examining the health of ancient pastoralists of northern China. That work put her on Aldenderfer’s radar and led to the invitation to join his Mustang expeditions.

Aldenderfer and his team made their first trek to the Mustang caves located about 13,800 feet above sea level in 2008, where they discovered Buddhist cave art, possible meditation chambers for monks, and skeletons dating back to 200 to 700 AD. The team determined that the caves were likely accessed in ancient times via rock outcrops and some kind of ladders. Erosion, including the splitting off of a large section of vertical cliff face, made it necessary for the team’s climbers to access the caves by rappelling down from the top of the mountain. Eng was part of the team’s 2010 and 2011 expeditions, hiking about two-and-a-half weeks each time to reach the caves. 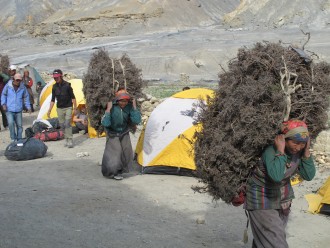 “As soon as we reached the site, we saw human bones below the caves that had fallen from the eroded cliff face,” she said. “By the time we had been there a week I had identified a minimum of 27 individuals. We set up a large tent and I used tape to make sections to sort the bones by the cave they came from. All ages of humans were represented, so the shaft tombs may have served as a place for a communal burial. As I was cleaning the bones, I noticed that they seemed to have cut marks on them. These cuts seem to be in similar areas—localized in certain regions of the bones— so it looks like they might have been de-fleshed. That’s a whole new mortuary tradition that we had not seen before in that region. We found animal bones, too, that had obviously been used in some mortuary context.”

The team compared their findings in Katmandu with bones and remains that were found earlier in the southern Mustang region by a Nepali-German team. Eng said some had gone through natural desiccation (drying) or were mummified—evidence that even in this tiny pocket of Nepal there had been several mortuary traditions. She returned to the Mustang site and a site with shaft tombs located near the village of Samdzong in May 2011. The team collected the bones of seven more individuals, for a total of 34. She said nearly 67 percent of all the bones had been de-fleshed, most likely with a metal knife, which the team believes is evidence that these people observed a funerary tradition that is similar to one known as a Tibetan “sky burial,” a practice which did not enter into the region until centuries later. In that tradition, the deceased’s body is cut up and left on a mountaintop, exposing the remains to the elements and predatory animals and birds. 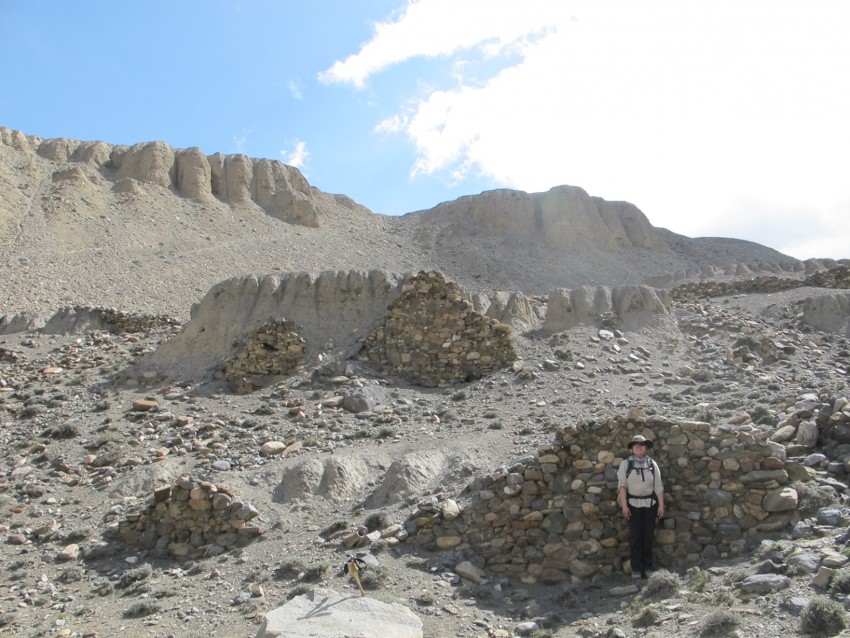 “In Tomb 5 in Samdzong, we found evidence of an elaborate mortuary treatment, including the remnants of a box that had a picture of a man riding a horse on it depicted in red and white,” she said. “Under a boulder, remains of an adult male and a child about 10 years old were discovered. From our viewpoint, we could tell that the adult received an elaborate treatment, including a mask made from gold leaf that might have been placed like a shroud. Lots of beads from different areas such as Pakistan, India, and Iran, and iron daggers were also collected. These discoveries, and ones made earlier, are evidence that this region was the nexus of a lot of trade, because elements of many cultures were collected.”

All the bones collected from the shaft tombs were taken to Samdzong, where Aldenderfer’s team met with representatives of the village, who will decide what to do with the remains, including possibly creating a museum for local history. “Being a bioarcheologist is not just looking at the bones,” Eng said. “You can learn some history from the bones, but there is also the process of talking with the people I meet on a daily basis about their cultural history and experiencing all the different landscapes.”

Though conditions were grueling—hiking at high elevations and working with limited light in the cold—Eng said she greatly enjoyed the expeditions beyond the discoveries because it provided an opportunity to meet people from a variety of backgrounds. Aldenderfer’s team included Pete Athans, who has scaled Mt. Everest seven times, his wife, who served as the videographer, Mohan Singh Lama of the Nepal Department of Archeology, climbers, photographers, many local Sherpas and lots of mules and horses. She will return to Nepal in May-June 2013 to conduct research in some specific caves identified by Aldenderfer’s team.

“It‛s the inherent mystery,” she says. “I like revealing the story of how these people lived, what they encountered, what they survived and adapted to.”